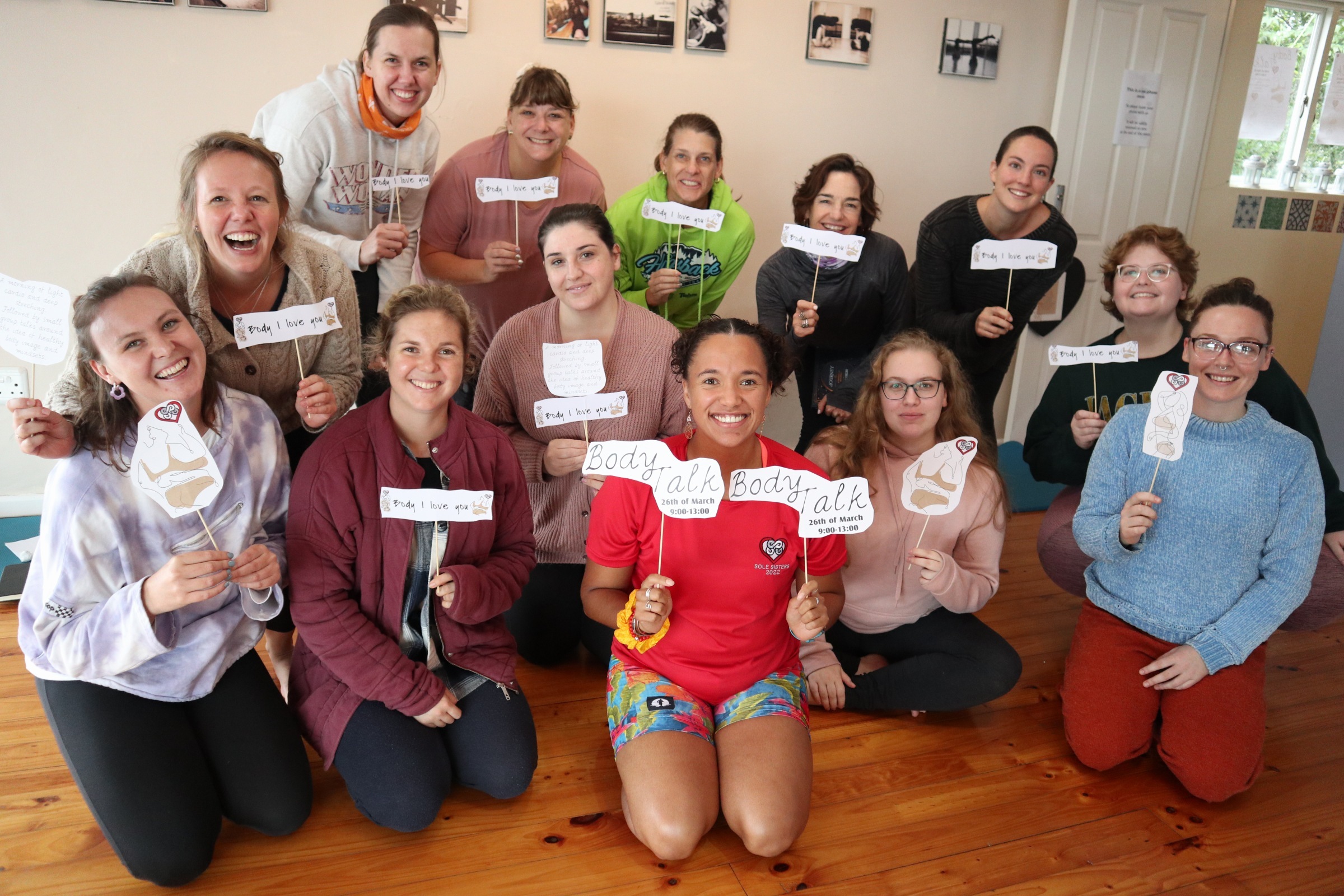 They describe themselves as “an incredible group of women who are inspired by faith, fun, caring, and courage; to step up to the plate, empower and make a difference in the lives of others.

The Sole Sisters aim to counter societal messages that encourage women to develop negative self and body images and adopt unhealthy lifestyles to meet unrealistic body standards. They encourage each other to create positive mindsets and give back to their communities.

On Saturday, 26 March, 14 women gathered at the Natural Affinity Yoga and Pilate Studio for a Body Talk event. The event was organised by Samantha Carolus – a Sole Sister, Rhodes Masters student and teaching assistant. Carolus is also a fitness instructor at The Natural Affinity On the Go Studio, where she instructs strength-based training classes and promotes holistic movement.

The Body Talk raised R3000 for LIV Lukhanyiso Grahamstown – a local organisation that works to provide holistic residential care for orphans and vulnerable children. The organisation’s motto is: RESCUE a child, RESTORE a life, RAISE a leader and RELEASE a star.

The Talk started with Carolus welcoming and inviting participants into the space and then explaining the inspiration behind the event.

This was followed by a presentation by Health and Life Coach Shannon Skae, who focused on body positivity, nourishment and a new eating disorder called orthorexia – an unhealthy obsession with eating healthy food and over-exercising.

“Eating healthy foods is obviously good for you, but it’s deemed unhealthy if it becomes a compulsion,” Skae said.

The group then completed a reframing exercise, of which one participant noted, “I have never thought about my body in this way. I am so grateful we were able to reframe our minds like this”.

A monologue performance by Tas Sherman reflected on the struggles of growing up fat in a society that deems fat bodies undesirable.

“When you grow up fat, you’re sort of waiting for permission from some skinny person in charge to be allowed the privilege to be seen.”

The monologue led to an intimate group chat. The women reflected on body image struggles they have dealt with and how they were encouraged to find certain parts of their bodies undesirable and in need of change. Another participant expressed that the group conversation was eye-opening.

“To know other woman feel and think the same is comforting.”

The talk ended with affirmation exercises to unlearn negative thought processes about our bodies and learn to treat our bodies with love and respect.

Commenting on The Body Talk, Carolus said, “It is no secret that women struggle with body acceptance due to the ridiculous and quite literally unhealthy expectations social norms hold them to. I wanted to bring women together to speak into that space and examine that voice that tells us we are fat or shouldn’t wear that or eat this.”

The Sole Sisters regularly run to raise funds for organisations doing community work. The group was founded in 2016. Over the years, it has gained love and respect from the Makhanda community as a group of upstanding women who run with a purpose and passion.

Every year each sole sister is tasked with two challenges. The first is to train and prepare for a three-day running journey, between 60km-130km across various terrains. The second and perhaps most important is to raise funds for the chosen charity organisation for the year. This year, the Sole Sisters have chosen to raise funds for LIV Lukhanyiso Grahamstown.

Carolus says as a Sole Sister, she finds the group encourages physical endurance training and total body acceptance. “The Body Talk was a perfect way to raise funds and have honest conversations about female body perception,” she said.