Councillors replaced as MCF is wracked by factional conflict 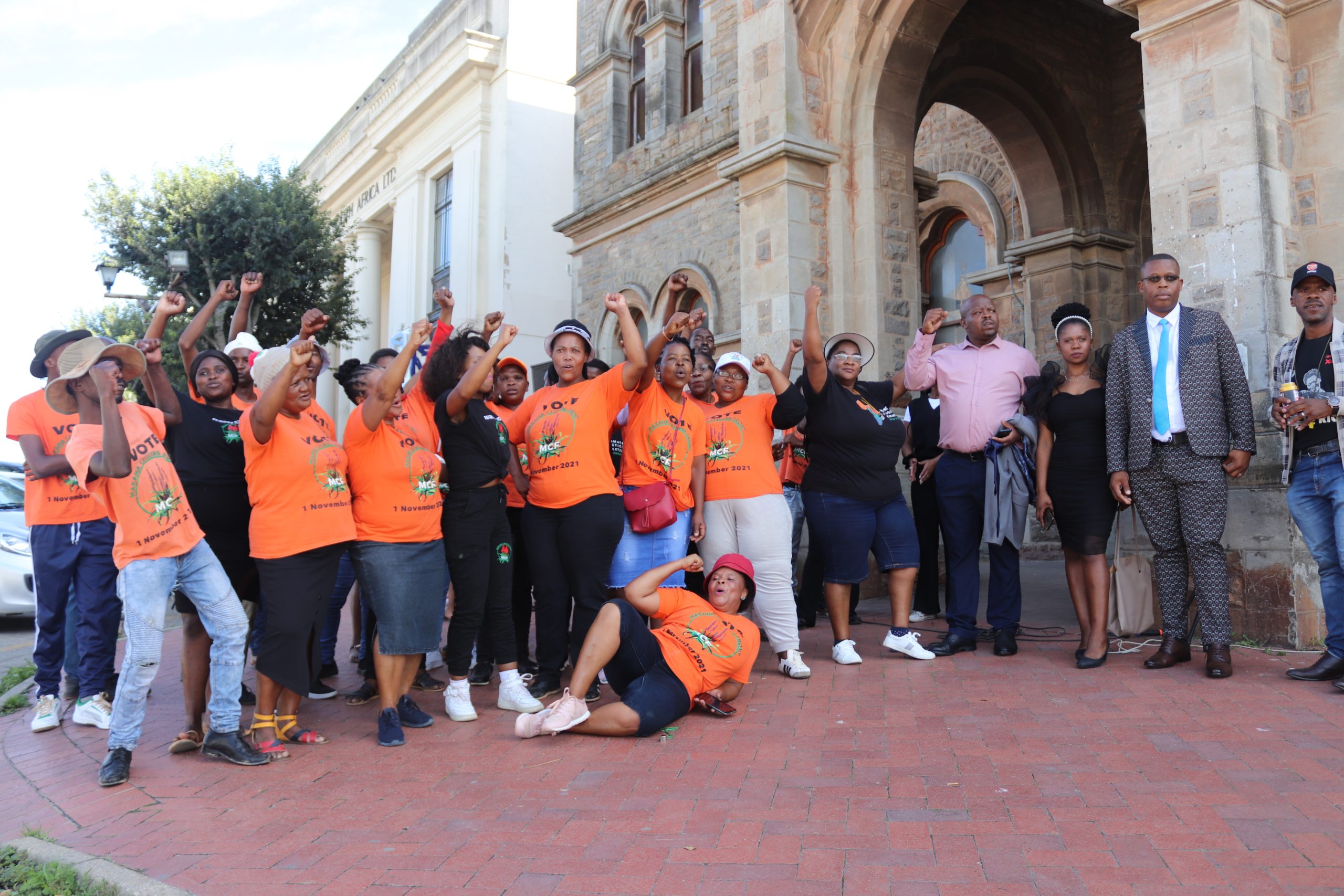 One of the five councillors expelled from the MCF and the Council, Lungile Mxube, has vowed to take the matter to the courts.

They replaced Jonathan Walton, Kungeka Mashiane, Lungile Mxube, Jane Bradshaw and Philip Machanick, who served on Council since their inauguration on 23 November 2021.

The MCF arose out of the mass protests that rocked Makhanda in May and June 2021. While the party failed to win any of Makana’s 14 wards, it won over 18% of the popular vote, propelling five MCF proportional representation councillors into Council in November.

Hopes were raised that a new non-racial, civil society-based political party, with popular support across the city’s divides, would help to provide opposition to the ruling ANC and oversight for a struggling municipality.

Kota claimed these were politically motivated and hit back by organising MCF meetings in Fingo Square, where a new committee and five replacement councillors were elected.

In February 2022, a grouping centred around Ayanda Kota instructed the MCF’s PR councillors to resign. A letter to one of the five, quoted by The Daily Dispatch, said the management committee that appointed them was not legitimate, and their appointment as PR councillor “did not undergo the scrutiny of the public entirely”.

Among the points of dispute is who the Independent Electoral Commission contact person for the organisation is.

Kota claims the MCF’s founding documents confirm that he is the IEC contact person and secretary of the MCF. However, Mxube said Kota had resigned his role as IEC contact person for the MCF in September 2021 and that the new interim management committee had agreed that Philip Machanick would be the new contact person, and the IEC had accepted this.

At an MCF members’ briefing on Wednesday, interim convener Lungile Mxube said there was no legal basis for the move and that Kota had been integral to every decision of the organisation.

Mxube described the removal of the five councillors as “an unprecedented event, a naked abuse of power and authority, and an opportunistic display” by Council Speaker Mthuthuzeli Matyumza. In a press release on Thursday, he said the problem was not necessarily the newly-inaugurated councillors but the Municipal Manager, Moppo Mene, and the Speaker.

“The last communication from the IEC is an email where they said there is a leadership dispute in the MCF and won’t take sides. They further noted that where there is an intraparty dispute, the IEC is guided by the court and only acts based on court judgment or order.

“We are yet to receive such a court order. We have never been served by any court papers before this alleged decision of our removal was taken.”

“The letter detailed information that we requested from both Kota and Soxujwa about their purported expulsion of the five MCF PR Councillors. In line with the principles of administrative justice, we asked them to furnish us with a copy of the constitution and relevant section (a disciplinary code), which gives them power and authority to expel five MCF PR Councillors without any proper hearing.”

“We never received any response. Only the MM responded, confirming that he informed Kota that Municipality still recognises us as legitimate councillors who were duly elected and gazetted. The MM said the municipality would only act based on a court order in which a declaratory order from a competent court is issued, declaring that we must be removed.

“In such court processes, we ought to have been consulted to state our side of the story.

“On the 28 March, I further wrote an email to MM asking him to respond and confirm the rumours that we will be removed on 30 March. He responded by dismissing the rumour and denying having written to IEC declaring a vacancy.”

“The last email from MM was received by Philip Machanick on Wednesday night confirming that the municipality still recognised us as lawful and legitimate MCF PR Councillors. What happened between 8 pm Wednesday and 9 am Thursday is puzzling.”

However, The Daily Dispatch quoted IEC spokesperson Kate Bapela as saying that the Municipal Manager had declared the PR councillor vacancies on April 6, processed and filed on April 12, when the appointment of the new councillors took effect.

“The five councillors were expelled by their party, and this caused the municipal manager to declare the vacancies in terms of section 27 of the Municipal Structures Act No 117 of 1998 read with schedule 1 Item 18 of the same Act,” Bapela said.

Mxube said that no formal communication had been received from the municipality that he and the other four councillors had been removed. “We are still receiving invitations for committee meetings – on Thursday, I received a notice for the LLF meeting.”

Mxube said both the Speaker and MM had correspondence informing them that there was an intra-party dispute. “The matter is still an internal party issue because we are still waiting for a response from Kota and his cabal for some particulars related to our purported expulsion from the MCF.”

“Both the Speaker and MM acted prematurely and unlawfully by swearing in new councillors without giving us a fair opportunity to reply and without placing this matter before Council. We are definitely heading to court,” he said.

Meanwhile, in an exclusive interview with Grocott’s Mail on Thursday, Ayanda Kota outlined the events that led to the expulsion of the five MCF PR councillors.

Kota said that in 2021 he was given a mandate in Soccer City to officially form a political party through the IEC. The leadership was elected – with Kota as secretary – on 16 June 2021, and the party was registered with the IEC.

Kota said that MCF has the mandate to relate to the citizens of Makana and “embody the struggle of the people”.

“What surprised me is that after the election, there was not even one public meeting held at Soccer City, and the citizens didn’t know the progress of the party and its policies, which made me question the authenticity of the leadership under Mxube,” he said.

Kota also indicated that he is the MCF secretary, and the people within the organisation know that.

“After the election, we went to a meeting where I was the chairperson of the meeting, where the five PR candidates were chosen. I said that these names must be taken to soccer city for the names to be endorsed by the people. Instead, they didn’t do that,” Kota said.

Kota said Mxube’s “illegal leadership” did not hold an official Special General Meeting, which contradicts the party procedures in the election.

“Mxube was not able to produce an official document seconded and approved by the people of MCF. Mxube and his team cannot come to Pothole and Donkey and create the interim management of MCF. Secondly, in selecting the leadership, I said that I couldn’t be elected as the leader of the movement because in the meeting then, I was the Secretary of the meeting. You have to follow the necessary procedures if you want to remove me,” said Kota.

Kota said unlike ward councillors, PR Councilors can be reviewed and changed after their inauguration if the political party has valid reasons and feels it is necessary to do so.

“This issue with the five PR councillors could have been resolved internally and moved on, but due to the stubbornness of their leader, it also affected the other four in this unfortunate matter,” Kota said.

Kota said Mxube had insulted him and his son but was willing to sit down and talk to him “for peace’s sake”.

More detailed accounts from both Kota and Mxube will be published next week.