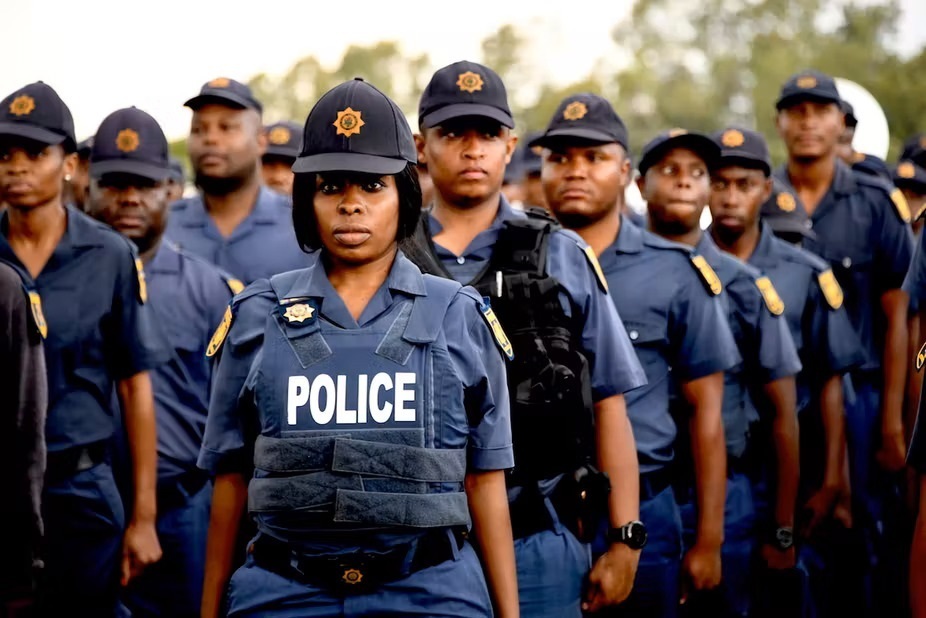 A culture of better service and use of minimal force are key to improving public confidence in the South African Police Service. GCIS/Flickr

By ROD AMNER and NYX MCLEAN

This week’s editorial is a little bleak. But when dealing with public offices, one’s outlook can get gloomy. If it isn’t the municipality and their inability to get us water, keep us on the power grid, manage their finances, or even ensure our stormwater channels are cleared, another public office is messing up. This week our focus is on SAPS – local and national.

We have spent the better part of this week assisting one of our Postgraduate Diploma students – that is, one of our Grocott’s journalists, Likhapha Thaathaa – with her ongoing struggle to get a police clearance certificate so she can join her classmates on campus. She has struggled to keep up with her course without electricity in rural Lesotho. She is currently writing her story, and we will publish it soon.

But we will tell a little of it here because it is also part of a shared story of Grocott’s to help her get her police clearance. As her editors and lecturers, we spent Monday and Tuesday this week placing dozens of phone calls and several emails to the SAPS in Pretoria.

Why did we place those calls? Because it has been 15 weeks since Likhapha applied for clearance, and she has not yet received it. A process that should take five to 15 days has taken 15 weeks.

We were told – as Likhapha was told minutes before us – that her clearance had finally come through and had been printed. We all breathed a sigh of relief.

But it didn’t last long.

There now appears to be a glitch in the system, and the allegedly printed clearance certificate is nowhere to be found.

Why is answering a phone, printing a certificate, and keeping it safe and ready for collection seemingly impossible?

We are frustrated and depressed by the experience of attempting to interact with the SAPS. We haven’t yet tallied how much it costs us in airtime to make those calls, but we know that it costs us the better part of two workdays and considerable reserves of mental health. We could, technically, afford to pay this cost because we have IT infrastructure and secure jobs. But what about those in our country who do not have the time, money or confidence to spend hours and days on the phone hoping a SAPS officer will answer their phone?

At our own Joza SAPS station, Visible Policing Commander Lieutenant Colonel Boyce Mbeleni and Station Commander Colonel Nomsa Mtshagi are listening to grievances about the reporting of rape at the police station, and the need for improved responses considering the constant danger of GBV for women living in township communities.

Benjamin Roberts and Steven Gordon write in The Conversation that public trust in the police dipped to a low 27%. They argue that if left unchecked low and diminishing confidence in the police will continue to undermine police legitimacy in South Africa.

Recent recommendations put forward by the Institute of Security Studies could improve public attitudes towards the police. They include dispensing with excessively hierarchical police culture, promoting competent and ethical police leadership, and strengthening other parts of the overall system of police governance.

While the SAPS is not the only system broken, it is an example of the broken state of so many of our public offices. Yes, we recognise that a work environment and culture shape whether one will do their job or not. And going against the grain often opens one up to abuse from one’s office mates and superiors.

But citizens are tired of pushing against aloof officials who do not seem to care for the lives they harm through their dysfunction.

It is a massive beast of a thing, and we are only a few people. We will tire if it does not shift, and in tiring, we may stop fighting. It knows this. It is waiting us out.

What alternatives do we have? Can we turn to alternative infrastructures or services such as those found in the private sector?

Private security services, such as Hitec and Shmart, work very well in Makhanda. But their services are only necessary because they take up the slack created by the ineptitude of public offices.

As things continue to worsen, what accountability can we ask for? Is it not enough to draw attention to how much is lost or how little is done. We need sustained action. And we need it now.

We implore our community to please rally against the continued dysfunction. If you are doing such work, please share it with us. If you want to begin the work, please involve us; we will be happy to work with you to help document the process, draw attention to the issues you are tackling for our community and work towards sustained social change. You can email us at grocottscommunity@ru.ac.za