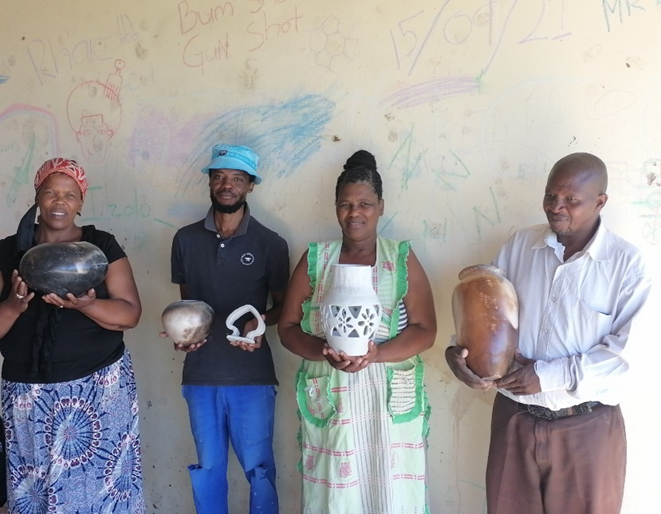 The high-quality ceramics are fired at the Egazini Community Centre in Extension 6 using grass and cow dung.

For Thandisizwe Kiti, Nonyaniso Nakhupi (secretary), and Thozama Nkwinti (treasurer), Siyaphakama is a cultural project as much as an economic one.

The project draws inspiration from Xhosa culture – even the colours of the pieces reflect Nguni cattle, which are so central to Xhosa cultural, political and economic life.

Siyaphakama has was founded in 2018 by Meshack Masuku.

For Uncle Meshack, the key to ceramics is knowing one’s history and culture. Ceramics has been an integral part of South African life for thousands of years. Clay has been moulded to create functional items, like posts and water jugs, but also as a form of artistic and cultural expression.

With funding from organisations like SETA, participants were taught how to prepare clay mould and fire clay into traditional clay pots.

The Makana district boasts the largest deposit of kaolin in South Africa. Kaolin is used to make clay for tiles, porcelain and pottery items. Sadly, no kaolin is currently processed in our district, and Siyaphakama is one of the few enterprises creating manufacturing products from it.

The cooperative faces many challenges at their Egazini home: water scarcity, funding, vandalism, theft, and a lack of electricity. But, Kiti says the participants remain passionate about their work and are committed to unity, honour and equality.

Siyaphakama is exploring better ways to market its work. And they hope to become a tourist attraction before expanding into other locations in the province and nationally, Kiti says.

The cooperative was heavily impacted by the country’s economic hardships, exacerbated by the Covid-19 pandemic.

Nkwinti says that before Covid-19, the organisation used to get invited to the National Arts Festival to showcase and sell its wares. The response from festival-goers was very positive.

The lockdown was tough, but Siyaphakama remains true to its vision.

Covid-19 forced the cooperative to consider taking better advantage of online opportunities to market their work. However, they lack essential equipment, like laptops, and access to the internet and electricity. And even if they were to get this infrastructure, they would be faced with vandalism and theft.

Currently, they walk from door to door and have placed a stand at Emthini, on the outskirts of Makhanda. But, they make more than they sell.

What sets Siyaphakama apart is its commitment to Makhanda, gender equality, youth development, and teamwork, Kiti says. They are attempting to empower youth in local schools to create a legacy.

As much they are running a business, they also see themselves as part of the city’s social development.

Makhanda is the province’s best-performing educational city, but Kiti asks, “How many children pass matric sufficiently well to get to university?”

The cooperative is distressed about what Makhanda youth are going through and wants to offer young people skills training. They want to show that it does not matter where you come from or what you have been through you – you can make something out of your life.

Despite struggling, the crew hopes that resilience and sacrifice will soon pay off.

Siyaphakama members acknowledge and appreciate the support from the departments of Social Development, Recreation, Arts and Culture (DSRAC) and Agriculture. DSRAC supplied machinery – although they cannot use it at the moment since there is no electricity at the Egazini Community Centre.

They have been negotiating with the Makana Municipality to resolve their electricity problem.

The crew thanked the community for its support and encouraged residents to get involved in any way they could.