Narrow win for Stars over Oostelikes 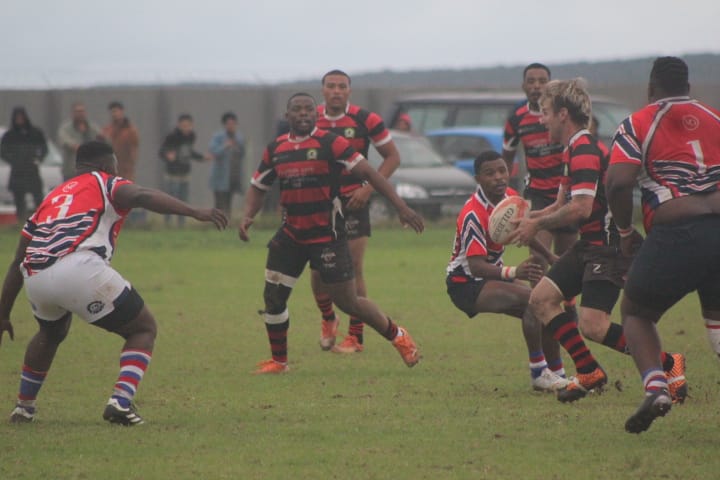 Despatch Oostelikes gave Trying Stars 1st XV a huge fright in their backyard at the Wentzel Park Sports Ground in Alexandria on Saturday. Stars narrowly defeated Oostelikes 20-18 after leading 12-10 at the changeover.

Stars, who are still unbeaten in the EPRU Grand Challenge Group C, moved to second place on the log after occupying it since the start of the competition. Brumbies are now the new log leaders while Oostelikes moved down to fourth position.

The game kicked off at a great pace and intensity as both teams are known for their attacking prowess and ability to through the ball around. Stars took the lead within the first 20 minutes and found themselves with 12-0 in front in the form of four penalties by Garth Oosthuizen. As expected, the home side dominated the lineouts, and their scrumming was equally impressive.

Stars also missed two scoring opportunities which would see them taking the score out of their opponents’ reach. But the skilful Oostelikes fought back before halftime with a penalty and a converted try to narrow the gap 12-10 at the break.

After halftime, Oostelikes attacked the home side’s goal line. They were five metres away when Garth Oosthuizen neatly followed the play and executed a brilliant intercept to score in the left corner for a converted try. Stars extended their lead 17-10.

The visitors replied shortly after with an unconverted try, while Stars again missed two certain try-scoring opportunities. With ten minutes left, Oostelikes took the lead for the first time with a penalty to lead 18-17. Stars received a penalty straight from the kickoff, which saw Oosthuizen stepping forward and make no mistake 45 metres away as he scored all the 20 points on the day. Stars held on to their narrow 20-18 lead despite the numerous attacks launched from Oostelikes in search of the winner.

The Grocott’s Mail Sport Man of the Match went to Garth Oosthuizen from Trying Stars. He scored all the 20 points, including a 90m try. He was solid on attack and accurate with the boot.

Sheldrid Cannon, one of the Stars coaches, was a relieved man after his side’s narrow win. He said there were a lot of positives to take out from the game but also a lot of hard work ahead. “There was a concern in our scrums and kickoffs in the second half and too many penalties at ruck time. We must also learn to convert more opportunities into points.”