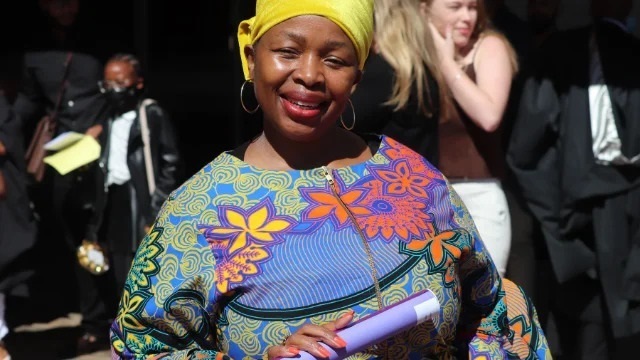 At Rhodes University’s morning graduation session on Thursday, 7 April, the festivities were heightened as Ambassador Lindiwe Mabuza’s honorary Doctor of Literature (DLitt) was posthumously conferred, following the decision of the Rhodes University Senate and Council.

Her daughter and CEO of the Advertising Standards Authority, Thembi Msibi, was in attendance to accept the honour on her beloved mother’s behalf.

“On behalf of my mother, Lindiwe Mabuza, we thank Rhodes University for this prestigious award. As a family, we are both humbled and honoured at recognising her contribution and commitment to the struggle and her beloved country, South Africa. It is most heartening that she was aware of this accolade as she received the letter from Rhodes shortly before her death. Indeed I am convinced she is smiling down from the heavens,” Msibi said.

Ambassador Lindiwe Mabuza was a literary icon. Through the beauty of her words in academia, journalism, and – closest to her heart – her poetry, she could write herself into history. She lived a long and colourful life as an anti-Apartheid activist, writer and diplomat before passing away on 6 December 2021.