MM in a race to fix chaotic finances 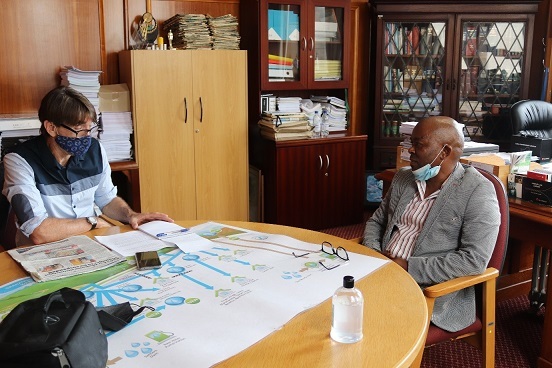 It has been a tough week for Moppo Mene, Makana Municipality’s beleaguered municipal manager.

On Thursday, 31 March, he was asked to account to a special Makana council meeting for the Auditor-General’s serious, ongoing concerns about the non-compliance of the municipality’s financial systems. He was asked to return at April’s Council meeting with a more detailed explanation.

Meanwhile, the Eastern Cape government is looking over his shoulder for progress made in the municipality’s Financial Recovery Plan following a recent order of the Supreme Court of Appeal.

In an interview with Grocott’s Mail on 30 March, Mene said that the municipality’s financial problems did not start three years ago when he assumed his duties.

“Remember, when Pam Yako was sent to deal with the municipal problems in 2014, the municipality was under Section 139 [administration],” he said.

“The leadership that was in charge about eight to nine years ago made some terrible decisions that led the municipality to where it is today with regards to the disclaimers from the Auditor General.”

“When I arrived at Makana Municipality, there was not even toilet paper available [in municipal buildings].”

He once took R10 000 out of his pocket to replace tyres on municipal trucks.

About R35-million had to be urgently paid to creditors. Trust levels sank to the point where service providers insisted on being paid first before entering into contracts with Makana.

Mene said AG’s disclaimers were rooted in the poor quality of the financial statements produced by the municipality.

About 60-70% of the financial statements are composed of assets. The Makana asset register was managed on a woefully inadequate Excel spreadsheet

“The requirement is that you must use a compliant system that is going to make sure that the municipal assets are compartmentalised to understand the cost implications of those assets. Municipalities are also supposed to have what ‘as built’ drawings that confirm where the asset is.”

Makana did not have these elements in place. Consequently, the AG could not correctly assess Makana’s financial position, Mene said.

This is receiving urgent attention. A compliant financial system is being installed. The asset register is being redeveloped. ‘As built’ drawings are being commissioned. An asset manager has been appointed and a new chief financial officer will be appointed in the next few months.

And three separate workstreams – finance, good governance and service delivery – have been set up to activate the financial recovery plan.

“It is not a quick win – it’s a very long, protracted process. But, we will be in a position to say, ‘This is the asset value of the municipality against the creditors.”

One bright spot in Thursday’s Council meeting was the news that Makana has paid off all the R85-million it owed to Eskom on 30 June 2018.

“I’ve already met and briefed them. I welcome any support because the work to be done here is enormous.”

“We cannot meet our obligations at that rate. However, if we had smart meters, we will not need staff to read meters – meters would be read through the system. And then we need to provide mechanisms for easy payment (Pick and Pay, banks, apps).”

Mene wants the national and provincial governments to fund these smart meters.

A fundamental concern for Mene is closing the ‘trust gap’ between the municipality and its stakeholders. “The Makhanda Circle of Unity is asking, ‘How do we play ball together and lift this municipality into a better space?'”.

“We need to prepare very clear and specific budgets so that stakeholders know exactly what is going to be spent and why – then you’re creating a better space. We create a ‘trust benefit’.

We’ve had the meeting with the business on the electricity issue and explained everything that occurred in December. Again, early this week, we had a meeting with the Makana Residents Association and business, talking about fundamental issues of what we need to do. And I think they went out of that meeting with an understanding of what we are doing.

“But what they need to be assured of is that what we said in the meeting is actually what is going to happen.”

In the Supreme Court ruling, the judge urged Makana not to go for a quick fix, Mene said.

“The judge said, make sure you built this institution over phases so that you are able to put systems in place and make sure that it never goes back to what it was. But, unfortunately, people want to paste the problems of Makana to individuals rather than understanding what has occurred here and what plans are being put in place dealing with the root causes of the fundamental challenges facing us.”

Mene praised the new Executive Mayor Yandiswa Vara and the current crop of councillors. “The mayor is frank. When I am wrong, she tells me I am wrong. Sometimes my directors tell me the mayor has been hard on us. I say, ‘That’s correct – she needs to do that.’ But, tomorrow she greets you warmly.”

“We have good councillors leading Makana. We’ve got a very good opposition, that stretches the law to the core – the DA, the MCF, the EFF. It’s a very good experience to have – they make you account, they ask critical questions (except when they always want me to be suspended!). So, it is an engaging, vibrant council – and that is very important for an accounting officer.”

Mene said he would not reapply for his position as Municipality Manager when his contract expires in August 2022 unless he is “well persuaded”.

“I am 59 years old and I have been in the municipal manager role for more the 25 years through different municipalities. I think it is time for new blood in this municipality,” he said.

Mene urged Makhandans not to lose hope. “Stay active in your respective communities.”