Hard-fought win for Kowie over Rosebuds 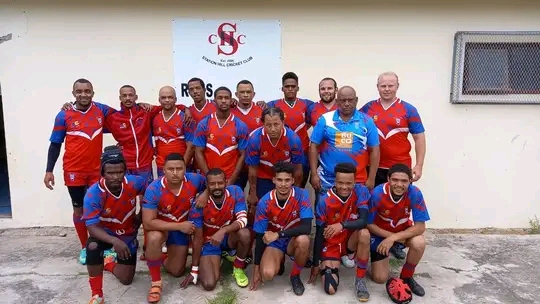 The game was started with a very positive attitude and was an excellent close encounter in the end. It was a better performance from Rosebuds after losing their Alicedale Derby encounter in the first round last week against St Marks.

Mason Brooks, Kowie United Vice Captain and flyhalf, had his kicking boots on for the day and kept his side in the lead with an early penalty.

Soon after that, Kowie scored a brilliant try by hooker Marcel Mey.

Rosebuds had a tough and hard first few minutes of the game and made many mistakes in the first half, infringing at breakdowns where they were constantly penalised.

Kowie started the game with a high tempo running in three tries in the first half by Eugene Willemse (7) and Bradley Marias (11).

Rosebuds scored a late first-half try in the form of Geraldo Hefke (2), bringing scores to 24-7 for halftime.

Rosebuds’ discipline was excellent in the second half breakdowns improved immensely from the first half. They gave the ball more air to the wings and scored two of their three tries that went out wide to the wings. Their general play was also good, and they started the second half with real confidence and fought their way back to score three tries in the second half, playing against 13 men due to two yellow cards of Kowie United to bring the scores level again at 24-24.

With less than 10 minutes remaining, Kowie United’s big pack powered their way over the line and score a try in the corner to bring the scores to 24-29 in favour of the home team. It was crunch time when Rosebuds were on the attack in the opponent’s 22m with five minutes left. They had the opportunity to score and were in reach of winning the game. But an infringement at the breakdown saw them penalised.

Kowie United held on and managed to score a late try in the 79th min of the game to bring scores to 34-24, and Mason Brooks made sure of the conversion to secure his side a nerve-wracking 36 – 24 win at full time.

Andley Jones of Kowie United earned the Grocotts Mail Man of the Match award for his brilliant all-around performance that saw four try-saving tackles. He was brilliant under the high ball and created four of the five tries.

Assistant Coach of Kowie United Kirt Wessels was delighted with his side’s win and praised Rosebuds for their fighting spirit.

“In the first half, we managed to dominate and put points on the board and took a healthy lead. We lacked discipline in the second half with two yellow cards. Our compliments go to Buds, who used their opportunities when we played with 13-men. They came back strongly and almost beat us in the end. Lots of work ahead for us, which we will try to correct at training.”