Russia’s invasion of Ukraine is illegal under international law: suggesting it’s not is dangerous 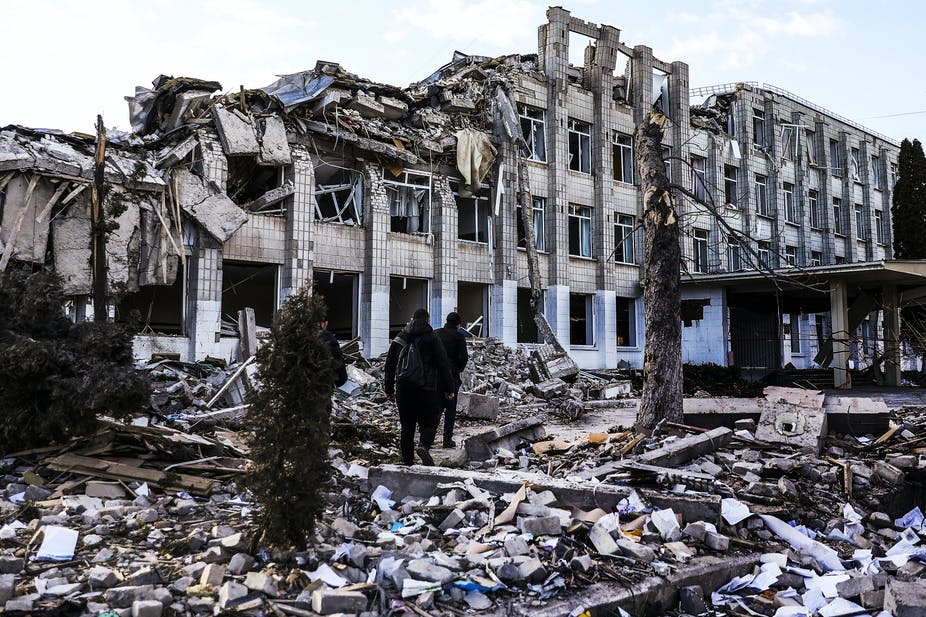 The destroyed main building of a school in Zhytomyr, Ukraine. Photo: EFE-EPA/Miguela A. Lopes

While the world is largely united against the invasion of Ukraine by Russia, South African public figures, including the government, have attempted to downplay that it is, in fact, an invasion. And their frequent calls for negotiation tend to present the conflict as one in which both sides should be prepared to make concessions.

President Cyril Ramaphosa has even reported that Russian President Vladimir Putin appreciates his ‘balanced approach’ to the conflict. So what does international law say about one country sending armed troops across a border and shelling another’s towns? The answer calls for some historical background.

After World War II ended in 1945, the United Nations was established. Its first stated purpose was:

to save succeeding generations from the scourge of war, which twice in our lifetime has brought untold sorrow to mankind.

To this end, it emphasised that the global order was based on the sovereignty of states) (Article 2(1)) and outlawed the use of force by one state against another (article 2(4)).

There are only two narrowly defined exceptions in the United Nations Charter, the world body’s founding document, to the prohibition on the use of force. These are met when states act either in self-defence or under the authorisation of the UN Security Council. Therefore, Russia’s invasion of Ukraine can be legal only if it falls within one of those exceptions.

It is completely uncontroversial that sending armed forces across the border of a state without its consent is a use of force. This happened when Russia sent tanks and infantry across the internationally recognised borders of Ukraine. President Putin’s recognition of two breakaway regions in southeast Ukraine before this move does not affect their status as Ukrainian territory under international law. Indeed, it violates a separate rule protecting state sovereignty: that states may not interfere in each other’s internal affairs.

Apologists for the invasion have focused on the West’s ‘provocation’ of Russia, mainly through its expansion of NATO to include Eastern European states such as Croatia, Estonia and Poland.

But focusing on why Russia feels threatened by the West confuses causation with justification. In addition, by referring only to why Russia supposedly feels threatened and failing to address the legal position at all, the South African government, the governing African National Congress – and other apologists – undermine the most cardinal rule of our international legal order. It is a rule on which South Africa’s survival as a state depends.

As we have established that Russia has used force against Ukraine, the next step is to analyse whether Russia can call on any exceptions justifying force. Before we do so, we must dispose of one possible objection to a legal argument based on the UN Charter. When the UN was established, many states, including most African states, were still colonised. They could, therefore, not participate in the creation of the charter.

Although they voluntarily acceded to the UN after acquiring statehood, they played no role in formulating the charter’s text. Such decolonised states have occasionally rejected rules drawn up without their consent. But they have never resisted the underlying principle of the sovereignty of states, nor the rule that states may not use force against one another.

Indeed, as the Kenyan representative to the United Nations, Martin Kimani, recently emphasised, decolonised African states even prioritised the norms of territorial integrity and state sovereignty over any right they might have had to reclaim territory they had due to the arbitrary map-making of their former colonial powers. As Kenya has pointed out, African states accepted the borders that the colonial powers had imposed on them to preserve peace and foster cooperation.

So does Russia meet the exceptions to art 2(4) of the UN Charter?

There are only two in the charter itself: when force is authorised by the UN Security Council (Article 42) or when a state acts in self-defence (art 51).

Scholars and commentators have also suggested a third exception based not on the charter but on moral considerations and (limited) state practice: humanitarian intervention, or, in its most widely accepted formulation, the duty to protect. In the form in which the UN General Assembly has accepted this, this exception would not allow Russia to use force without Security Council authorisation. The Security Council has not authorised Russia to use force against Ukraine.

Therefore, Russia’s only remaining justification is self-defence, set out in Article 51. That says that states have the right to self-defence “if an armed attack occurs against a member of the United Nations”.

Therefore, an armed attack is an essential prerequisite to the legal use of force, and it is strictly interpreted.

This legal requirement is supplemented by customary international law. The formulation here is that the necessity of self-defence must be:

instant, overwhelming, leaving no choice of means, and no moment of deliberation … and that the {defending} force, even supposing the necessity of the moment authorised {it} to enter the territories of the {attacking state} at all, did nothing unreasonable or excessive; since the act, justified by the necessity of self-defence, must be limited by that necessity, and kept clearly within it.

There must, therefore, be an armed attack that has already begun or is imminent, and the force used in self-defence must be the only way of averting or repelling it.

Russia has not suffered an armed attack from Ukraine or any state. Neither NATO’s presence in Ukraine nor any other justifications offered by Russia and its apologists reach the threshold of an armed attack. This includes a range of allegations. These cover the alleged mistreatment by Ukraine of Russian speakers in that state, alleged links between the West and the far-right in Ukraine, and the alleged presence of sophisticated weapons in the state.

There are other channels of resolution for these kinds of grievances. And even if these channels don’t work, and Russia is left with a situation in which it ‘feels’ threatened, it does not have the right to use force. Whether the requirements of self-defence are met is a question of fact, not feeling.

Two significant dangers follow from any attempt to disguise or distort the illegality of the invasion, which South Africa’s foreign affairs department’s recent pronouncements illustrate only too well.

The department’s call to “all sides to uphold international law, humanitarian law, human rights, and the principles of the UN Charter, and to respect each other’s sovereignty and territorial integrity” misrepresents the facts. That’s because it creates the impression that Ukrainian troops are occupying Russian territory or shelling its towns.

The moral equivalence that this creates between the opposing states is then underscored by the department’s call for negotiation for resolution of the current ‘situation’.

This is the second and more dangerous threat in South Africa’s defence of Russia. We dare not ignore that it is a shocking proposal that Ukraine should have to negotiate to secure the withdrawal of Russian troops. It is shocking because it transfers responsibility for the invasion to Ukraine itself. Ukraine should not have to do anything to get Russia to obey one of the most cardinal rules of international law.

Whether Ukraine or anyone else in the global community, no state should have to earn Russia’s compliance with the law. If the rule of law is not respected, the entire global community becomes as vulnerable as Ukraine is now.

This article was first published in The Conversation Africa.