ANC must lose power, says UPM and other grassroots organisations 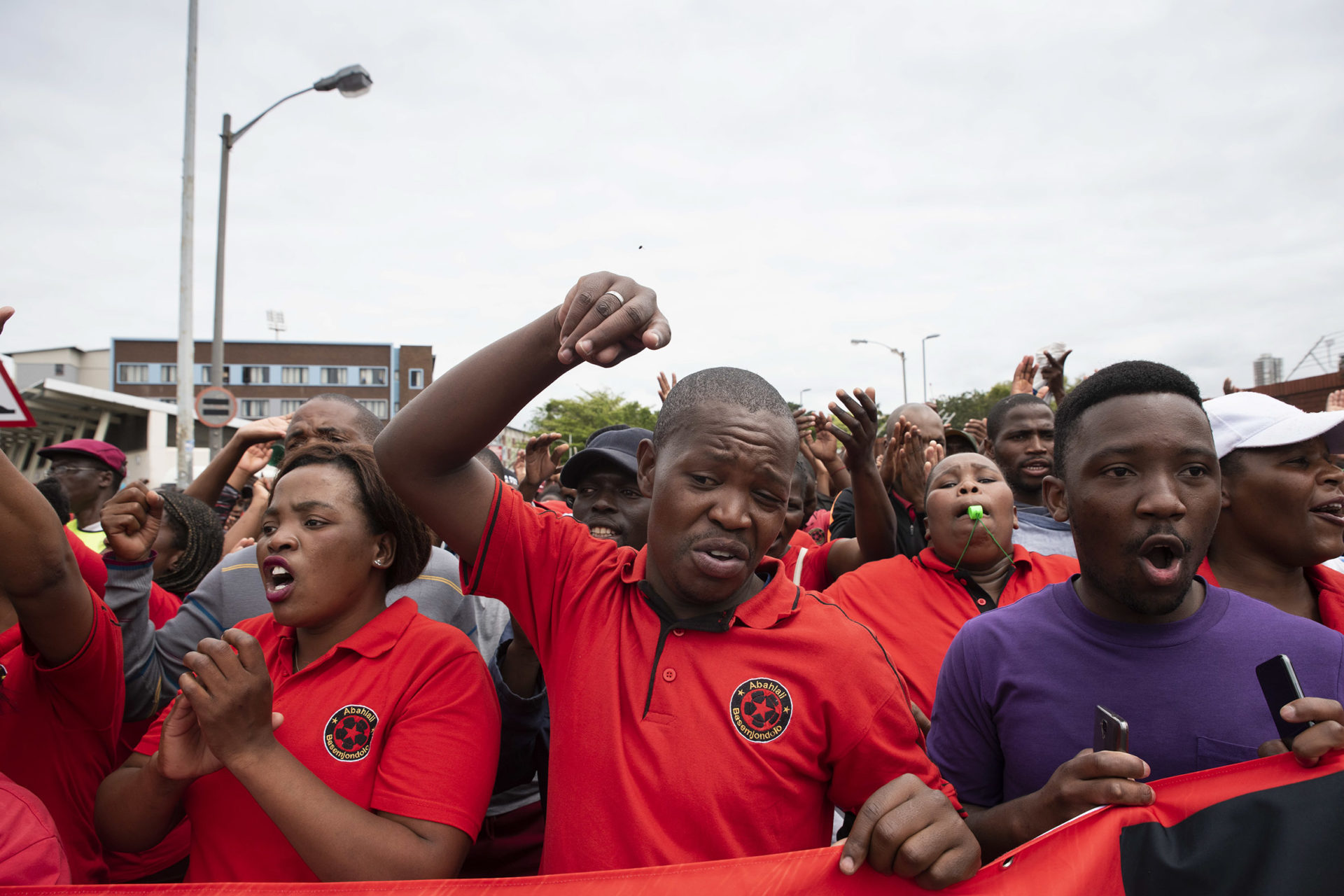 The governing party has been criticised for abandoning the impoverished in favour of naked greed and avarice judging by their presidential candidates ahead of the elective conference, writes New Frame’s ANNA MAJAVU.

Leaders of various grassroots movements have warned that a looming human catastrophe will surpass the violence, bloodshed, and destruction seen in the July riots last year. And, they say, the race for the ANC presidency will further divide an organisation seemingly run along factional lines, which bodes ill for good governance and finding solutions to the myriad crises in South Africa, including a weak economy, high unemployment and homelessness.

The ANC has become “the enemy of the people it claims to serve”, and this situation cannot be sustained for much longer, says S’bu Zikode, president of the national shack dwellers’ organisation Abahlali baseMjondolo. The scramble for spoils and naked self-enrichment comes at the expense of impoverished and working-class communities and shows that the ANC has ceased pretending it serves the people, he adds.

Zikode was very concerned about the growing trend of political assassinations within and by the ANC, saying, “those of us with a deep love for our country and her people are repressed, beaten, thrown in prison and even murdered with impunity as a way of silencing us”. On 8 March, Abahlali baseMjondolo activist Ayanda Ngila of the eKhenana commune was shot dead by three gunmen in broad daylight.

Ayanda Kota, one of the founders of Makana Citizens Front (MCF) based in Mkhanda in the Eastern Cape, says the current three-way ANC leadership race shaping up between incumbent Cyril Ramaphosa, Minister of Tourism Lindiwe Sisulu and disgraced former health minister Zweli Mkhize reflects the overwhelming “lust for power” inside the party, which has “completely lost what it is to be human”.

“This leadership race is a farce because there is no commitment to the cause of humanity. They are driven by their appetite for power, by their avarice for material things alone,” Kota said. Avarice and corruption had caused a crisis of inequality, he added, which the ANC pretended to solve by identifying its former president, Jacob Zuma, as the problem and then introducing a new candidate to “speak the language of the working class” and convince voters not to desert the party.

But “the problem is the ANC itself”, says Thulani Bukani, spokesperson of the Independent Komani Residents’ Association (iKora) in Komani, Eastern Cape. “The ANC has poor-quality cadres, and no one has what it takes to lead it in a direction it has not taken before, so we need to remove the ANC from power. That is the only thing we can do if we want progress in South Africa. The three candidates will never change our conditions because they are all just using the ANC as a vehicle to acquire more.”

A mess years in the making

Fani Ncapayi, senior researcher at the Inyanda National Land Movement, headquartered in Cape Town but has offices in several provinces, says Ramaphosa, Sisulu and Mkhize have all participated over the years in failing to improve the lives of South African citizens.

“Unemployment is at its highest ever, the health system is unable to provide proper services to the poor, and the education system is in constant crisis. South Africa has become the most unequal country in the world under their party’s leadership,” said Ncapayi, who is also an active member of the Cala University Students Association in Cala, Eastern Cape.

He says the three leaders have “done nothing about the socioeconomic conditions of the majority of South Africans all along, and there is no indication they will change. Ramaphosa was part of the company [whose actions]led to the death of workers in Marikana. Mkhize is implicated in corruption and misappropriation of resources in the health department. The leaders are just fighting for access to state resources,” Ncapayi said.

The Intlungu YaseMatyotyombeni shack dwellers movement in Cape Town says the ANC is neither willing nor able to provide the most basic services to shack dwellers, let alone create jobs. The movement was launched in 2020 after people who were retrenched and then evicted during the first wave of Covid-19 erected shacks on vacant land in Khayelitsha.

Spokesperson Mabhelandile Twani says the ANC is a corrupt party and out of touch with what impoverished South Africans need or want. “Their leadership fight does not concern the Black working class or unemployed communities looking for basic services, for decent jobs.”

Twani believes Mkhize “should be ashamed of himself” for entering the leadership race after being implicated in allegedly channelling health department money to his children through Digital Vibes, a company that was hired at inflated prices to do communications work for the government.

Time to stand up

The South Durban Community Environmental Alliance says “draconian” behaviour by the “ANC political elite” in Durban started more than 20 years ago and has continued ever since. The ANC is unresponsive to pollution, gangsterism, explosions that affect working-class communities and industrial fires. Instead, it holds closed-door meetings with polluting industries that have no benefit for communities, contends Desmond D’Sa, the alliance’s coordinator.

“Wentworth, where I live, has the highest ratio of young people killed through gang violence, yet [Minister of Police] Bheki Cele does not care. Nor do they visit the area to put forward a plan to deal with organised crime, death and imprisonment of so many of our young people,” D’Sa said.

Grassroots organisations from all over South Africa mobilised in Cape Town on 23 February to protest against austerity and for a Basic Income Grant outside the chamber where the budget speech was being delivered. But there are no signs that these movements plan to merge or form a political party that could contest the next national election in two years’ time.

“It is high time the social movements stand up and challenge the ANC and the DA directly,” said Twani. “The DA is also the enemy of the Black working class. The City of Cape Town has been continually attacking us as land occupiers, sending law enforcement agencies and taking us to court.”

Zikode believes that if the ANC wins power again in 2024, “then the nation will remain in crisis that will soon lead to human catastrophe. The July riots were one example, and there will be worse to come when the ANC remains in power.”