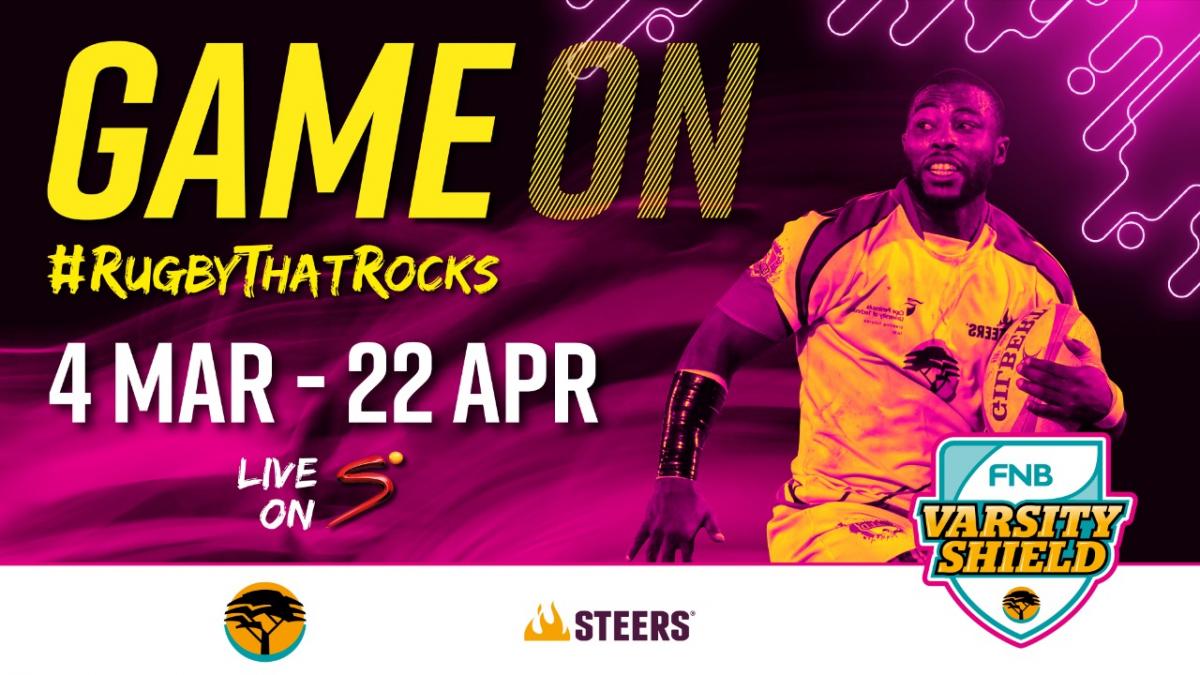 The annual Varsity Shield kicked off last Friday as Rhodes University played host to the tournament’s opening two rounds. FNB Rhodes went up against FNB CPUT under the lights on Great Field, but all did not go as planned for the men from Grahamstown.

FNB CPUT were the clear favourites heading into the game as they were crowned champions last year, and FNB Rhodes ended the season in sixth place. The last time these two met, CPUT thrashed this weekend’s hosts, 68-8.

Over the last four encounters between the two outfits, the combined scoreline read as FNB Rhodes (28) vs FNB CPUT (235). The men in purple were eager to rectify their mistakes in the past coming into this first-round matchup.

Spirits looked high in the Rhodes camp during their pre-match training as the atmosphere kept building ahead of this massive encounter between the two sides. The stadium was packed to the rafters as the teams emerged from the tunnel, where they were met with raucous enthusiasm.

Both FNB Rhodes and FNB CPUT were awarded a penalty kick in the opening 10 minutes but could not convert. CPUT were proving to be a constant threat down their right side, and their wingers were menacing the opposition.

A Rhodes lock forward was sent to the sin bin after not rolling away in the 15th minute of play.

Rhodes managed to hold their own for 20 minutes of the game until a scrum was awarded to the men in purple, who, however, lost possession inside the 22. From that, CPUT pounced on the mistake and capitalized as their number 8, Eely Pieters, travelled down the far-left side to put CPUT on the scoreboard. Their number 10, Feghon-Leigh Snyders, slotted the conversation away to put CPUT 7-0 up.

CPUT looked significantly stronger of the two in all areas of play throughout the first half. CPUT went over the try line for the second time after a long pass out wide, allowing their number 14, Christopher Andrews, to cross the line. They converted and were 14-0 up to the good in the 25th minute.

FNB Rhodes looked to be struggling in the scrums in the first half, and evidence of this could be seen with the men from Grahamstown losing 6 out of 8 scrums in the opening 30 minutes. There was an evident dissatisfaction from Rhodes’s head coach as he could be seen shaking his head in bewilderment as the half-time whistle blew.

Not long after the restart for the second half, FNB CPUT’s Moegamat Toffar went over the try line under the posts, and Snyders converted to put the boys from Cape Town 21-0 up in the 47th minute.

CPUT were reduced to 14 men after number 11, Keenan Williams, got shown a yellow for his apparent late tackle, but this looked to be a case of misidentification by the referee when the wrong player was sin-binned. Soon after, CPUT flank Che Klaasen was too shown a yellow for foul play in the 51st minute.

The biggest cheer of the night came when Rhodes finally got on the score sheet after excellent build-up play, which saw them go through five phases and ended with number 13, Jano Roux, going over the try line. Rhodes number 10, Siyolise Mabodla, slotted the conversion in the 55th minute to give the host a sliver of hope.

But, that hope was snuffed out when CPUT put yet another seven points on the board as their number 6, Keanan Solomons, went over in the 66th minute to restore their 21-point difference.

Rhodes looked to be on the hunt, but another unforced error resulted in a turnover. CPUT punished the purple outfit and pocketed their bonus point of the night after Björkan Hendricks went over the try-line for the fourth try.

CPUT added a fifth for good measure as they went 38-7 up, courtesy of number 21, Duran Alexander, and recorded their first points on the log for the tournament.

FNB CPUT’s captain, Siyasanga Ngubelanga, said Rhodes had developed from last year, “but we didn’t execute our game as we planned”.

He said that if CPUT worked together, kept developing and learning from their mistakes, he was sure they could bag their third title in four years.

FNB Rhodes captain Simelela Mbanzi said his team played well but couldn’t hold on in certain sections of the game. Head coach Andy Royle echoed these words from his captain, saying the scoreline flattered the visitors.