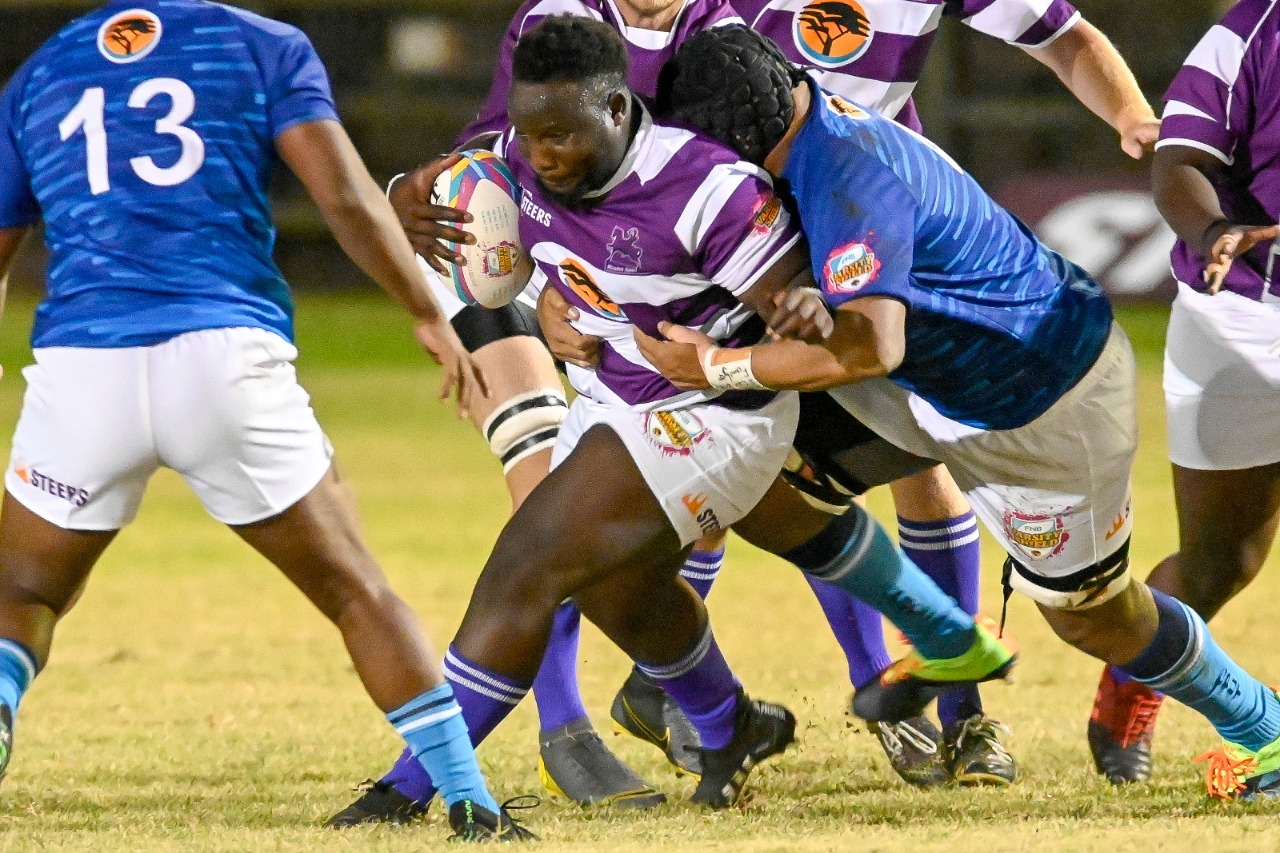 Rhodes fight to retain possesion in their encounter with the Durban University of Technology on Sunday.

FNB Rhodes suffered their second defeat in the Varsity Shield on Sunday as they were beaten 5-8 by FNB DUT at the Great Rhodes field.

Before the game, Rhodes head coach, Andy Royle, said his team were “probably still sore from Friday, but spirits are high”.

He also said Rhodes could not underestimate the opposition despite getting the better of them last year.

“I don’t think we deserve to be walking around confident of anything at the moment. We are a long way off proving that we are too good for anything.”

This was FNB DUT’s first match of this year’s Varsity Shield, and they were hoping for victory, which is exactly what they got. The game was evenly balanced in the early exchanges, and DUT looked to be the stronger of the two in the scrum.

FNB Rhodes lost possession a few times in the first 15 minutes, and they could have been punished if DUT had taken their chances.

FNB DUT number 11 Langelihle Ntombela was shown a yellow card in the first 30 minutes after committing a high tackle. Five minutes later, Rhodes number 4 Xhanti Stofile also received a yellow. FNB DUT won a penalty, which they converted and were 3-0 up before half-time.

Not long into the second half, Rhodes received another yellow after their number 1 Lwazi Mzamane committed a dangerous foul. Ill disciplined was the topic on everyone’s lips after the third yellow card of the game was produced.

DUT produced a well-worked try only for it to be ruled out after TMO found that their number 22 committed a dangerous tackle in the build-up.

A penalty was awarded to Rhodes, which they decided to kick for the poles, only for their number 15 to kick narrowly wide and miss the chance of going level. By the 60th minute, Rhodes had conceded 20 penalties, while DUT conceded 10.

FNB DUT scored their first try of the game and first of the tournament as their number 6 Menzi Nxumalo went over in the 61st minute, putting the visitors 8-0 up.

Rhodes got their first and only points on the board as their number 2 Uza Nyanda went over to reduce the deficit to three.

In the space of 10 minutes, FNB DUT saw themselves receive two yellow cards and a red. Their number 17 Menzi Myeni was sent to the sin bin in the 78th minute, and their number 4 Alberth Kapenda got brandished with a yellow soon after. DUT number 22 Thabani Mnisi was sent packing after the TMO reviewed which looked to be a dangerous tackle a minute before the end.

The whistle signalled the end of the game as FNB DUT walked away with an 8-5 win over hosts FNB Rhodes to conclude round two of the Varsity Shield.

The game was not the best watch, but it was a fascinating encounter. FNB Rhodes have their work cut out for them as their round 3 matchups see them come up against FNB UFH Blues, who sit atop the standings after Round 2.