Neil Aggett’s death was not a suicide 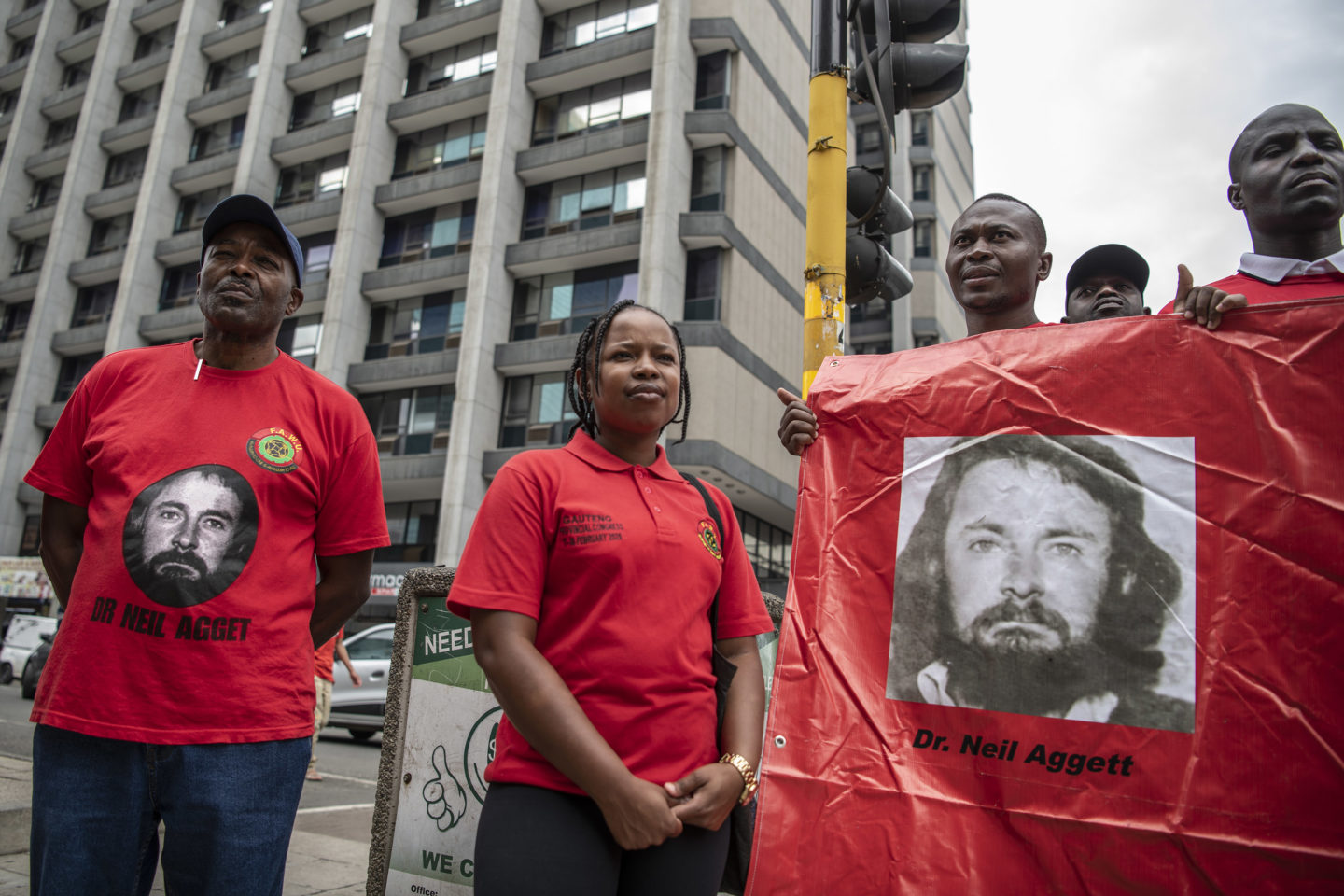 4 March 2022: Members of the Food and Allied Workers Union (FAWU) outside the South Gauteng High Court where judgment in the reopened inquest into his death was be delivered. Picture: Ihsaan Haffejee

Judge Motsamai Makume’s long-awaited judgment at the reopened inquest into the 1982 death of the trade unionist places blame squarely at the feet of the security police, writes New Frame’s TYMON SMITH.

Forty years after his body was found hanging in cell 209 at what was then John Vorster Square police station, Judge Motsamai Makume has found that the death of anti-apartheid activist Neil Hudson Aggett was not a suicide. “Members of the security police killed him,” said Makume in the high court in Johannesburg on Friday, 4 March.

In his evaluation of magistrate Petrus Kotze, the judge was scathing, who found at the original inquest in 1982 that “no one was to blame” for Aggett’s death. Makume said Kotze’s methods and judgment showed clearly that he was “biased and did not have an open mind”. Kotze intended from the outset to accept that Aggett had committed suicide to exonerate the security police, said Makume.

The decision comes almost six years after the Aggett family first approached the National Prosecuting Authority (NPA) to reopen the inquest into his death. His inquest began in early 2020, was postponed because of the Covid-19 pandemic and then resumed online in 2021.

The judgment arrives at a pivotal last-hope moment for the many families still seeking to hold those responsible for the death of their loved ones during the apartheid era accountable.

Joao Rodrigues was the last surviving member of the group of security policemen implicated in the death of teacher and activist Ahmed Timol. He died last year before attempts to prosecute him could be finalised. The last surviving member of the Security Branch directly implicated in the abduction and murders of the Cradock Four has also died. So has former president FW de Klerk, who was alleged to have been at a meeting of the State Security Council that ordered the permanent removal from society of the Eastern Cape anti-apartheid activists.

Former security policeman Paul Erasmus gave evidence about the workings of the Security Branch, the torture methods in which he was trained and his involvement in the security police’s madcap plot to uncover evidence that Aggett had been “suicidal from the day he was born”. He died last year. Former South African super-cop Frank Dutton, a pivotal investigator in the Aggett and other cases related to the Truth and Reconciliation Commission (TRC), died earlier this year.

Lawyers for the Aggett family singled out both men for their invaluable contributions to the reopened inquest. And Makume referenced the evidence given by Erasmus and Dutton frequently in his judgment. e also referred often to advocate George Bizos’ work and writings, the Aggett family’s lawyer during the original inquest who died in September 2020.

Other members of the former security forces stubbornly repeated the version of events they gave at the original inquest when called to testify. Makume characterised their testimony as “lies” that were intended to support the cover-up concocted by the security police after Aggett’s death.

They claimed Aggett had been interrogated without any threats of execution or physical violence and that he had eventually broken and implicated his trade union comrades Oscar Mpetha and Jan Theron in ANC-related activities. The guilt of this confession traumatised Aggett, they said, leading him to hang himself from the bars of his cell using a kikoi as a noose in the early hours of 5 February 1982. The four-page statement that his interrogators claimed supported Aggett’s confession “never existed”, said Makume.

His interrogators failed to get Aggett to confess to being a member of the ANC despite using torture techniques such as sleep deprivation, electric shock and the “wet bag method”. Former detainees Jabu Ngwenya, Keith Coleman and others told the reopened inquest that they saw Aggett in the corridors of John Vorster Square the day before his death looking “zombie-like”. Makume surmised that Aggett had been physically and emotionally exhausted after being interrogated intensely from 28 January to 31 January 1982.

Makume did not believe the evidence given by police forensic investigators, who conveniently found one solitary fingerprint belonging to Aggett above the knot in the kikoi. The judge also dismissed the police’s assertion that Aggett had climbed the bars to tie the noose, as he would have been in no physical state to do so. Makume said the many items found in Aggett’s cell after his death were probably placed there by the security police to aid the cover-up, as repeated testimony from several former security policemen and ordinary police officers who worked in the cells showed that political detainees were not allowed to have such items in their cells.

Long delays and alleged political interference in the prosecution of TRC-related cases allowed Whitehead and Cronwright to die before being called to account. This made it possible for the security force members to adhere to what Aggett family lawyer Howard Varney dismissed in his closing arguments as evidence that “belongs firmly in the puerile category”. It remains to be seen if, following Makume’s findings, the NPA will prosecute the surviving members of the security police for perjury at the reopened inquest. Makume did not address political interference in the prosecution of TRC cases.

Aggett’s sister Jill Burger, who lives in the United Kingdom, was not in court. Her lawyers said she would comment on the judgment once she had studied it. Four of Aggett’s five nephews represented the family in court, the sons of his late brother Michael. Their mother, Mavis, accompanied them. They seemed quietly relieved but also declined to comment at this time.

The NPA is under increasing pressure from families to institute legal proceedings against perpetrators of apartheid human rights violations before they, too, escape justice. Aggett’s former girlfriend and fellow detainee Elizabeth Floyd and Yasimin Sooka, head of the Foundation for Human Rights, called on the NPA to follow up swiftly on Makume’s recommendation that the surviving former security police members who lied to the reopened inquest be prosecuted for failing to admit their roles in covering up Aggett’s death.

Judgments are still to be delivered in the reopened inquests into the deaths of activists Ernest Dipale and Hoosen Haffajee. And the long-delayed prosecution of the former security policemen implicated in the death of Umkhonto weSizwe activist Nokuthula Simelane is scheduled to start this year.

Arguments about who should pay for the defence of former security policemen have hampered the prosecution of officers involved in the killing of the Cosas Four.

There is also the drawn-out case of the Cradock Four. Family members have gone to court to compel the NPA to decide whether or not to pursue a case.

All of this means that despite the welcome decision in the Aggett matter, the outcomes of the long pursuits of justice for many apartheid-era victims are still very much uncertain.

Hopefully, Makume’s ruling will bring Aggett’s family the closure they have long sought and needed and spur the NPA and the Department of Justice to finally make good on the promises the post-apartheid government made to other victims after the TRC process.

Previous ArticleExercise: why we should, and how much is too much
Next Article A means to render our lives believable