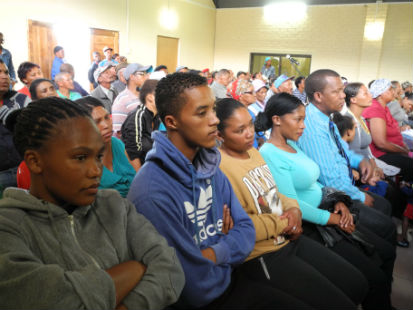 By PAUL KARIUKI, programmes director of the Democracy Development Programme

Citizen participation is an essential element of our constitutional democracy. South Africa is one of the few countries globally with a liberal Constitution that enables citizens to participate actively at all levels of governance.

The government had envisioned citizen-led local governance that would influence municipal decision-making, involving citizens from planning to implementation and evaluating municipal involvement, to deepen democracy in pragmatic ways.

Although setting up the ward committees system was a novel idea, the structure does not produce the envisioned results and improve community participation in municipal governance.

First, the structures have increasingly become platforms for political party activism. Most political parties have turned ward committees into recruitment grounds for potential party followers. In the end, ward committees cease to serve the interests of citizens and, eventually, their concerns are not responded to appropriately by the municipality.

Notably, critical marginal populations — such as women, the youth and people living with disabilities — are rarely represented in the structures.

Third, decision-making is not transparent. Most ward committees are used to endorse decisions already made elsewhere. In most cases, these decisions do not favour residents. As a result, it is almost impossible for people to hold local leaders accountable, given the lack of details about how decisions were arrived at.

Eventually, interventions unrelated to the needs of residents gain prominence, and the citizenry is left on its own, suffering under the weight of poor service delivery.

Fourth, the low literacy levels among some ward committee members are concerning. This makes it difficult to read and comprehend municipal documents, often written in technical language. The net effect is that they cannot communicate confidently with the local communities on any issues in the documents.

Fifth, too many incompetent ward councillors serve as chairpersons of ward committees. Meetings are not correctly scheduled and happen ad hoc, procedures are not followed correctly, and some councillors are unprepared for meetings. All these issues undermine effective local governance and weaken the capacity of ward committees to deliver as expected.

The effectiveness of ward committees must be enhanced if citizens are to appreciate the gains of our hard-won democracy.

What is to be done?

Ward mechanisms to communicate with residents must be improved, especially where decision making is concerned. Municipalities need to understand that people’s participation will be ineffective if they aim to use ward committees to endorse decisions already taken elsewhere.

Residents must have an effective say in decisions that affect them and be given the space to play a role in implementing them, even if the council is ultimately responsible for governing the municipality.

Municipalities must avoid a bureaucratic, technocratic, one-size-fits-all approach to ward committee management and be flexible, innovative and creative in their engagement with people, using a variety of processes and structures. This is critical to advance active citizenship.

For instance, ward committees should be empowered to take responsibility for ward development plans that feed into and respond to the integrated development plans. When citizens are involved, they move from deficit thinking to abundance, for they know their needs better than municipal officials.

Ward committees should be depoliticised so that citizens can engage and serve without feeling obligated to trade off their values for political favours. Ward committee meetings should be aligned with important council meetings to ensure that the voices of citizens are heard and not only those elected to local leadership. Once a month would be ideal for strengthening effective participation.

Ward committees should be tasked with drawing up annual profiles of their wards. In line with this insight, ward committees should also oversee services and development in their locality. Practically, wards ought to contribute to the municipality’s assessment of the quality of the services of an applicant before the contractor is fully paid out.

Where possible, within clear guidelines, municipalities should incrementally allocate resources to “enable ward committees to undertake development in their wards”, an aspect already provided for in the law. With this empowerment, ward committees could, at least, take some responsibility for mobilising citizens to undertake some practical developmental actions, such as fixing potholes in their streets, fixing pavements and restoring street lights, using local labour.

The allocation of funding resources and delegating power to employ labour could produce tensions among ward committees and residents. This kind of arrangement will need to be managed skillfully.

Ward committees should operate by a code of conduct. They must be run professionally because they are dealing with people’s lives. This move is highly likely to lead to heightened accountability of committee members to both the residents they serve and the municipality.

Part of the key performance indicators of the public participation unit officials could be the performance of the ward committees. For the officials to be effective, they will have to consider the complexities and contradictions of their wards.

Developmental local government requires functional ward committees. Without this, citizens will continue to doubt whether democracy works. For them, democracy must be lived, not legislated.

Some resources for ward committees:

This article was first published in the Mail & Guardian.