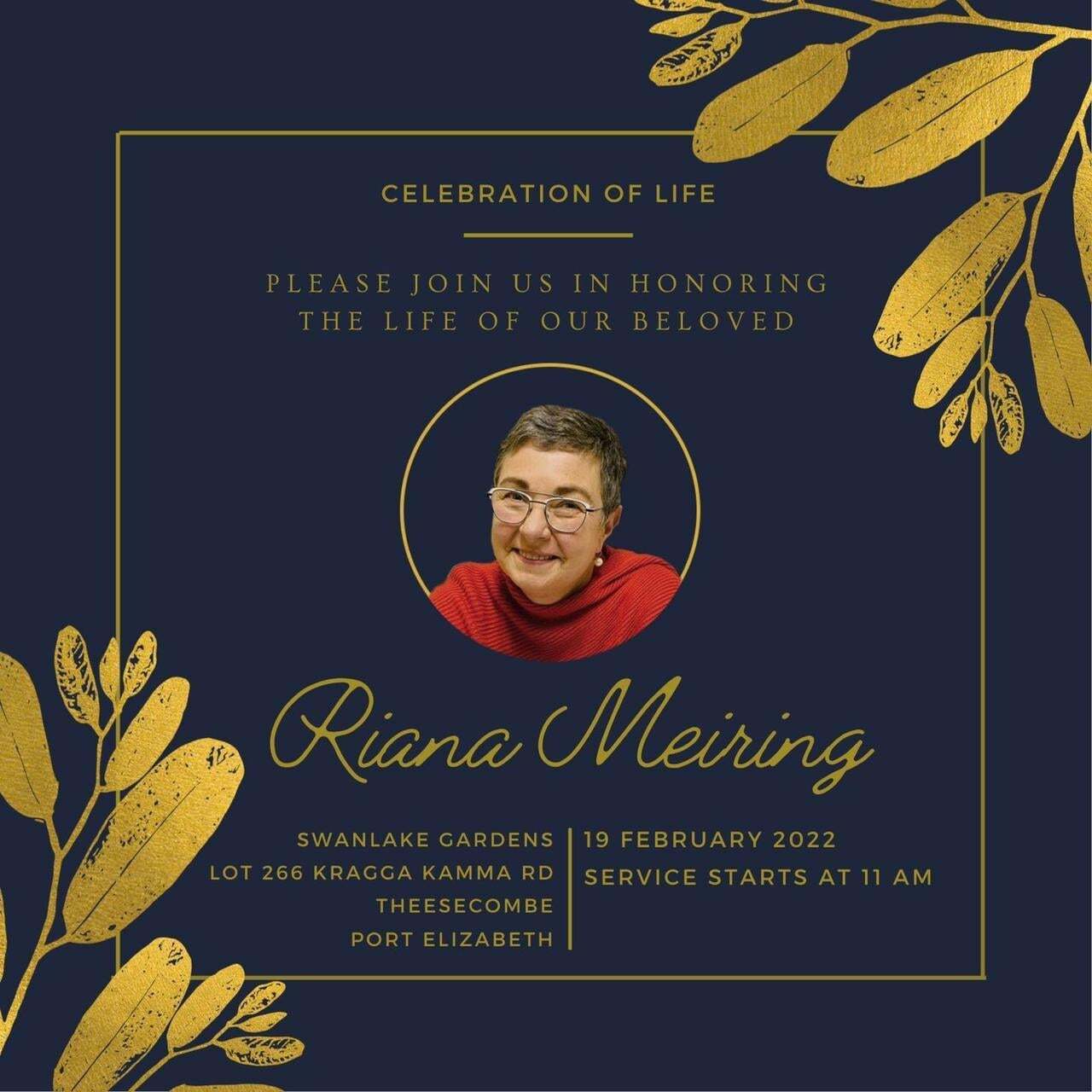 Riana Meiring, who served as Makana Municipality’s Director of Local Economic Development since 2008, died suddenly on Friday, 11 February. We publish some tributes to this long-serving and widely-admired public servant.

Tribute from the Makana Municipality

In my decade-plus of working in Makhanda, I encountered and worked closely with dozens of public servants. At all levels of government – local, district, provincial and national. In that time, I don’t think I encountered any who understood the ‘servant’ part of their job better or approached it with more integrity than Riana Meiring.

Hard-working, focused, passionate, and dogged, she was my go-to ally in meetings. She cut through the bullsh*t with a sweep of her tongue. She didn’t have to roll her sleeves up – that was their default position, always ready for action. She was my smoking buddy, always the first to catch my eye in a long meeting, usually when a puffed up, self-important politician was dancing around delivery. She’d reach for her pack of cigarettes, give me ‘the look’ and quietly excuse herself. Everyone knew where she was going. I’d follow in her wake and join her on the pavement, balcony, or side street where we’d talk, solve the problem at hand, go back into the meeting, and she’d wrap it up with a clear way forward.

She had a way of stroking politician’s egos (and probably mine too!) deftly, intelligently, and elegantly so that they never knew they were being swung to her point of view. She pushed them enough to get them to the point where they would let her get on with the job at hand, but never so far that they felt the need to jump in and disrupt or slow things down. It’s a rare art, and no one was a better practitioner of it than Riana.

She ruffled feathers. She made those who were failing in their duty uncomfortable and didn’t mind seeing them squirm. The good members of her team would have thrived under her clear direction and unequivocal, unimpeachable honesty. The slackers would realise their game was up and skulk into the shadows, muttering their dark thoughts and, over time, moving on to more comfortable jobs where they were never challenged or called to account.

She cared deeply about Makhanda and its people. She wanted the city to work and dedicated every hour to achieve that. As a white Afrikaans woman, she often seemed an anomaly in the municipality…. until you saw her in action and realised that she was the central guiding figure and saving grace in an environment notable only for its shortage of her energy and humanity. Few people – in any context – are indispensable. But Riana came close, as legions of politicians and political appointments who came and went through the doors of City Hall came to realise. And their respect (sometimes grudging) was genuine. This is why she survived so long in her job, even though she often had a giant target on her back.

There were times when she came close to giving up, weary of the uphills and desperation of the job. In those smoke breaks, she’d vent, and I’d see the sadness and frustration in her eyes. More than once, I expected to hear that she had resigned and moved to a job that paid more, but I should have known better. She bounced back—every time.
99% of the people in Makhanda remain unaware of the work she did at the coalface for them and with what integrity she did so. In my world, she saved the day more times than I can count. Her ‘to do’ list was long, and the phrase ‘not my job’ never passed her lips. She fought for water, roads, infrastructure, jobs and against corruption, incompetence, laziness. When things felt impossible, she’d take a breath and have another run at the obstacle. Over and over until it moved out of her way.

And that’s how she treated her lymphoma diagnosis a few years back. Another challenge, another obstacle to circumvent. We shouldn’t have been surprised but, with remarkable resilience, she kept going. On and on. Until now. When she was blindsided not by that but by something else.

An extraordinary woman whose contribution may be forgotten over time but will be felt for decades. She never sought glory – but maybe she’d forgive the final indulgence of the city naming a (newly tarred) street in her honour. If only to remind us all, forever, how a true civil servant serves.

Time to rest in peace, Riana. The trenches will be quieter without you.

The Makana Citizens Front (MCF) has learnt with deep sadness of the untimely passing on of Riana Meiring.
She was one of the longest-serving Makana directors who was instrumental in shaping Makana’s Spatial Development Plan LED Strategy and has led many initiatives to bring about growth, development and economic empowerment of all Citizens.

She was the most humble and dedicated servant. She never looked down upon citizens and taxpayers and was a true example of what many municipal directors should be when serving the people.

She was a great woman with noble character, a disciplined, honest, dedicated, selfless and most committed public servant.

She was always ready to serve and never said no whenever you wanted to see her. Riana was in the office from 8 am – 4.30 pm.

The Makana Municipality and residents have lost a great asset who fought a great battle for life, every second, every minute, every hour, every day, every week, every month and every year until she succumbed to death.

Go well, Mama Riana; your rich legacy, compassion, love and sacrifices you made for your beloved city and her people shall remain with us forever.

Thank you for teaching us about humanity. Your smile shall remain a shining light of hope to every living resident of our beloved city.

Our deepest condolences to her family and loved ones.

May her beautiful soul rest in peace.

Tribute from the National Arts Festival

Makhanda has lost a passionate supporter and servant of the people in the passing of Riana Meiring.

Riana was the director of Local Economic Development, and through her work, she dedicated much of her life, energy and soul to our city. She epitomised service, stared down every obstacle, swooped in to quietly save the day.

Constantly seeking solutions, she was hard-working and tenacious where it mattered and was a great supporter of and friend to the Festival. We will genuinely miss her ‘can-do’ attitude and determination, quiet presence and pride during the Festival.

Thank you, Riana, for all you have given Makhanda; your loss will be sorely felt. We send our deepest condolences to your family and loved ones.