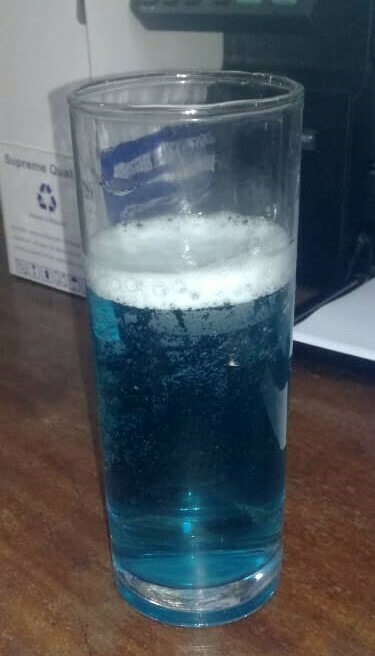 Cheers! The mysterious blue cocktail that emerged from a local tap this week.

As the Makhanda water crisis intensified this week, one resident was unnerved by the sight of blue water flowing from her tap.

When Maduna investigated, the resident asked him if copper sulphate was used to treat water, “because if that’s used, it makes water blue”. Maduna said the Municipality used only chlorine to treat the water.

“Even he was bedazzled and had no answer,” the resident said.

In a paper titled ‘Effect of Residual Chlorine on Copper Pipes in Drinking Water Systems’, a group of South American scientists established that high levels of chlorine in municipal water could release copper from water pipes. This is exacerbated if the copper pipes are corroded. The interaction of copper with chlorine produces electric blue water.

Is it possible that some copper pipe corrosion was localised in the resident’s house, explaining why no one else reported blue water this week?

Meanwhile, a woman in Manchester was baffled by ‘bright blue WKD’ [a vodka brand] running from kitchen taps in February 2021.

Following reports of an outage in the area, the water turned an odd shade of electric blue.

The 36-year-old told the Manchester Evening News: “At first, I thought it was a reflection of our blue washing up liquid until I held the jug to the window.”

But, according to the homeowner, it turned out to be an isolated incident – believed to be caused by blue water from the toilet finding its way elsewhere.

She added: “It’s looking increasingly likely that the drop in water pressure due to the outage has caused back-siphoning, which has led to the blue water in our toilet cistern [from toilet blocks]being redirected to our kitchen tap.”

Incorrectly setting up toilet cistern filling valves without appropriate backflow protection could be causing the issue.

If any chemists, plumbers or engineers are reading this, please feel free to post your theories and comments or email us at grocottscommunity@ru.ac.za.

Some comments on the blue water in the Ward 4 service delivery WhatsApp group:

“You must admit it is rather pretty!!!!”