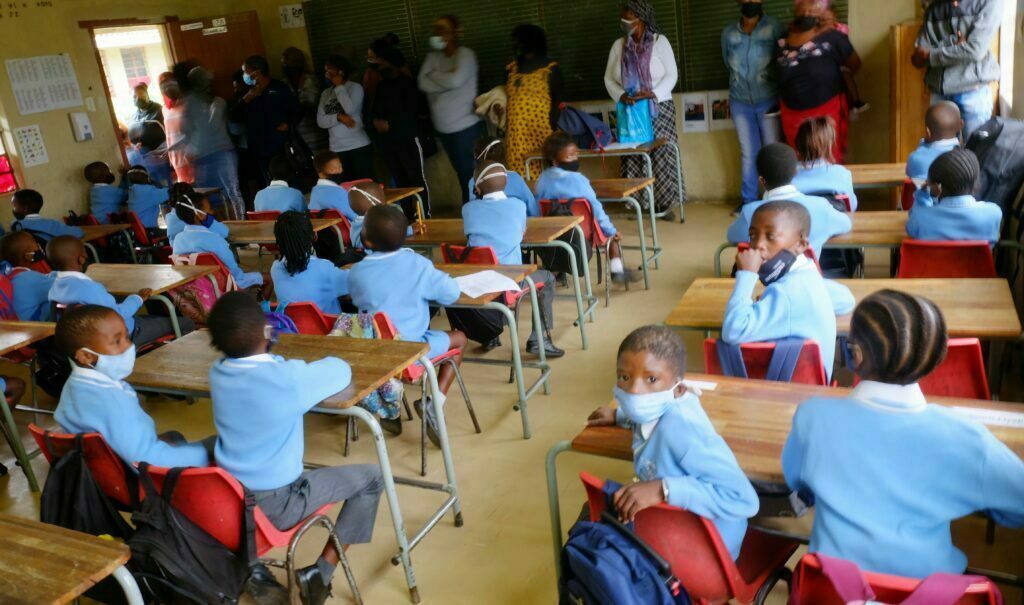 A first-day class at Archie Mbolekwa Primary on 19 January 2022. The school was without stationery for months and textbook 'topups' have yet to arrive. Photo: Rod Amner

Education assistants (EAs) and general school assistants (GSAs) at several local schools have embarked on a go-slow after the Eastern Cape Department of Education (ECDOE) failed to pay their salaries to the schools.

Some schools are not affected as they have received funding – and some have even received too much.

ECDOE payments were in such disarray at the end of last year that the wrong payments went to most schools – either too much or too little. According to an ECDOE spreadsheet, 1 802 Eastern Cape schools were overpaid, 1 852 under-paid. Correct payments were made to 1360 schools.

Some schools have paid out of their own pockets to make up for the shortfall, but many others cannot afford to do so.

The go-slows are related to which schools received payment and which did not.

Mary Waters High School paid its EAs and GSAs for November and December 2021 from the school budget. The Department paid the money on 3 November and 25 December respectively. However, no money was received by the ECDOE for January, and the school was not able to pay the EAs and GSAs in that month. Some are now on a go-slow, while others are absent. Five assistants have resigned since December.

Ntsika High School: EAs and GSAs are on a go-slow but agreed to work half-time after negotiations with the principal, Madeleine Schoeman.

Oatlands Primary: The school was overpaid by the DoE in December and was instructed to use that to pay EA salaries for January. But nothing has been received for February. EAs and GSAs are not on a go-slow at our school.

NV Cewu Primary: EAs and GSAs are on a go-slow. No deposit had been made by Thursday, 10 February.

George Dickerson Primary: EAs and GSAs are on a go-slow.

Tantyi Primary: The school received more than was required to pay all seven until the end of their contracts. No need for a go-slow.

St Mary’s RC Primary: The school paid EAs and GSAs from school funds for November, December and January. Only 50% was paid out for November and December, and nothing for January.

Johan Carinus Art School: The school received enough money to pay or two EAs and one GSA for November 2021 to February 2022 but will be short of about R5000 to pay them for March.

Fikizolo Primary: The school had enough to pay for November 2021 to January 2022 but will be short for February. The EAs and GSAs were on a go-slow for a day but now are back to work.

George Jacques Primary: No stipends were received for January. No payments could be made from school funds, but all assistants are at work at the school.

DD Siwisa Primary: The school paid EAs and GSAs from the money received in December (one full month stipend for November and a shortfall in December), but nothing for January. EAs and GSAs will be on a go-slow as of Monday.

What do EAs and GSAs do?

The Department of Basic Education (DBE) hired 280 000 EAs and GSAs – out of 940 000 applicants – across the country towards the end of 2021 as part of the second phase of the Presidential Youth Employment Initiative.

The department also prepared EA training programmes in financial management, digital literacy, Microsoft office and technical skills. The idea was that assistants would leave the initiative with valuable experience and skills to open doors for them.