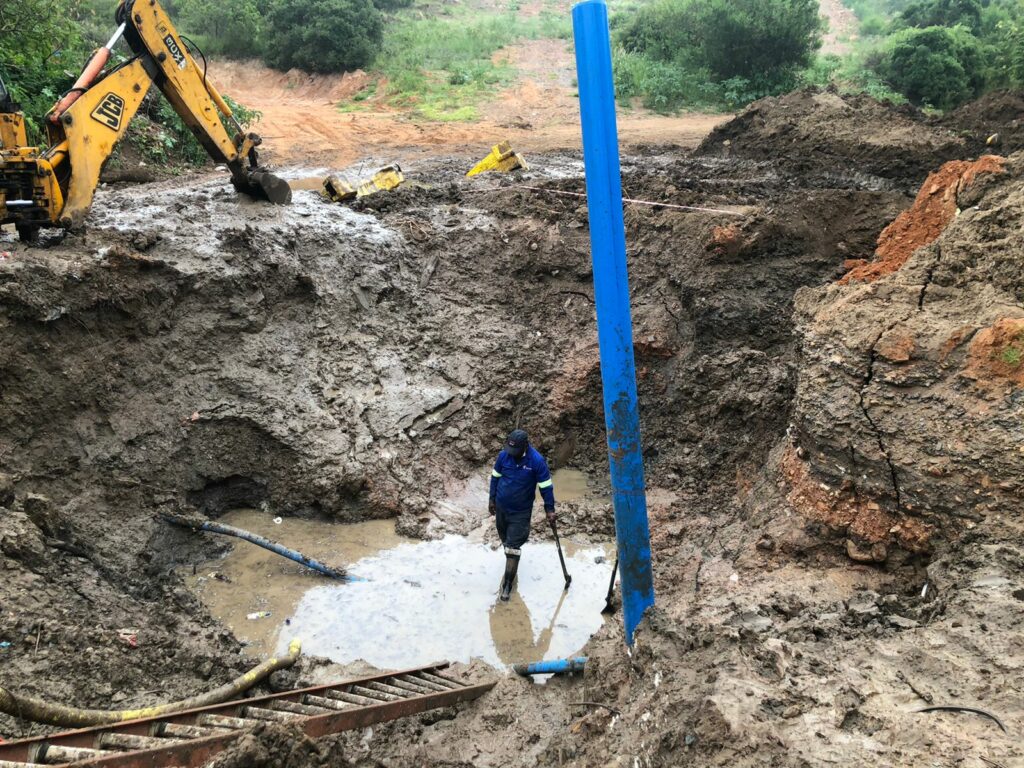 The leaking water pipe in Worcester Street (below Worcester Mews) has caused endless problems since the start of the year. This photo was taken by Democrative Alliance Ward 4 councillor Geoff Embling on Wednesday 26 January as engineers attempted to drain the trench and get access to the offending pipe. Photo: Geoff Embling

The water crisis crippling the city shows no sign of abating.

Residents, exasperated by the non-existent or sporadic water supply, have taken to social media and online reporting mechanisms, especially community WhatsApp groups, to vent, find answers and track down emergency water trucks. Some are writing appeals to the National Department of Water and Sanitation, the Sarah Baartman Municipality and Carte Blanche to impel an urgent intervention.

Both supply dams, Glen Melville in the east and Howieson’s Poort in the west, are close to full. Still, several suburbs on the western side of town have had a minimal water supply through January. And from December, most homes in Xolani, Tantyi and Fingo Village had water delivered by tankers only.

A Worcester Street water pipe burst at the start of the new year set off a chain of unfortunate events. The leak was repaired on 7 January, burst again a few days later, and after numerous attempted repairs, started leaking again badly on Tuesday 25 January.

According to Ward 4 Democratic Alliance councillor Geoff Embling, the engineers appointed by the municipality were attempting to fix the original broken pipe on Wednesday 26 January.

“I cannot say how long this will take, but one experienced engineer told me that it was clear from the start that the municipality was going about this the wrong way and that we are in a worse place than when we started – please vasbyt,” Embling said in a post to the 245 participants in his very active Ward 4 Service Delivery WhatsApp group.

Meanwhile, water pipes have been exploding all over the city.

“When they turn the system off and on, they get airlocks in the system. Water systems are not designed to be switched off and on all the time. The airlocks prevent certain areas from getting water because there is no pressure,” Embling commented in a voice note.

Torrents of potable water are bursting into the sky or cascading down streets. Queues at the Fairview Spring on the Port Alfred Road are long.

Embling said the DA would ask for all the current project contracts at a Thursday 27 January Council meeting. “We will ask how far they are, when the completion dates are.”

Ironically, Howieson’s Poort is full, and Settlers Dam (downstream from Howieson’s) is 30% full – up from 5% this time last year.

Embling said two out of the three pumps at the Howieson’s Poort pumping station are out of action. “That should be supplying the whole western side of town. This is not happening,” he said.

“I need to get a sense of what the real problem is, and for them to brief me on the severity of the situation, what it is that they are doing and what challenges they face,” Vara said.

“Subsequent to that I will brief the MEC and department of water and sanitation on the issue for them to look at augmenting the support of the staff on the ground.”

Grocott’s will update the situation as it unfolds.

For those who can afford it, here are some contacts for local water suppliers:

Previous ArticleSisonke South Afrika has donated food parcels to 20 families.
Next Article Be your own biggest supporter