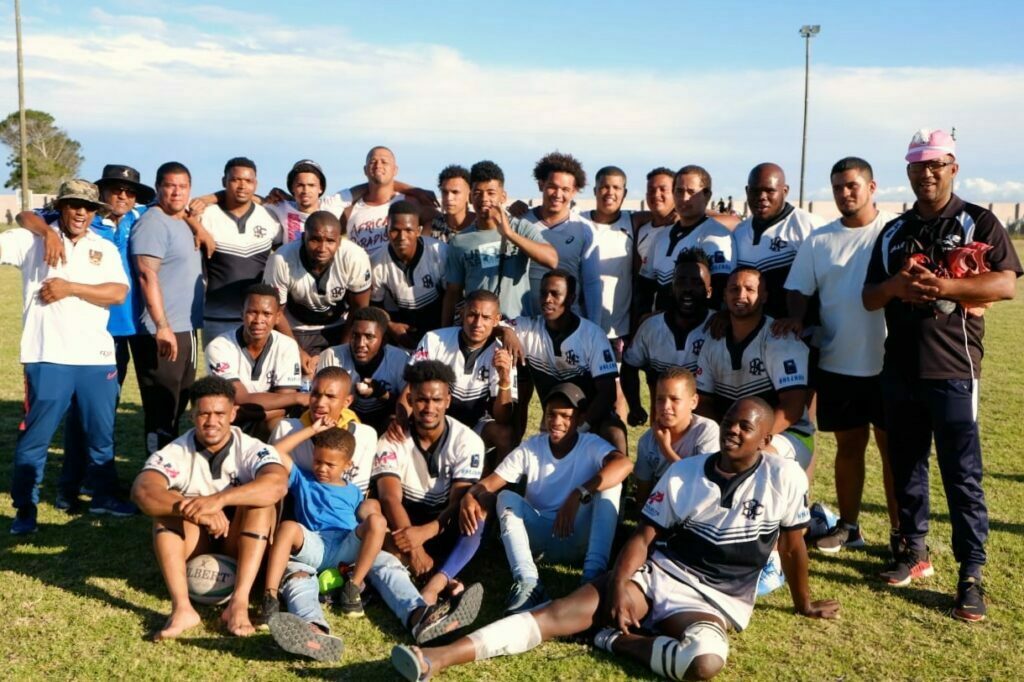 Newcomers Queenstown Progress were crowned Champions of the Trying Stars 10's tournament after a 19-5 win over Despatch Titans in a highly entertaining final. Photo: Chesley Daniels

Trying Stars Rugby Club kicked off the 2022 rugby season with a bang by hosting a highly successful 10’s tournament at the Wentzel Park Sports Ground in Alexandria on Saturday, 8 January.

Newcomers Queenstown Progress were crowned Champions after a comprehensive 19-5 win over Despatch Titans in a highly entertaining and competitive final.

Close to 2000 spectators and rugby enthusiasts from across the Eastern Cape attended the prestigious event. The weather was perfect, and the atmosphere was just electrifying and wonderful to watch.

The organisers should be praised and get the recognition they deserve for staging such a successful event. The type of rugby on display was fantastic – entertaining, competitive and tight. Any team on the day could have won the tournament, but Queenstown Progress took top honours as a just reward for their consistent performance throughout the day.

The event was also used as preseason preparations for the clubs for the upcoming season that will kick off on 22 January 2021 with the Eastern Cape Super 14 Competition.

The two tournament favourites, host Trying Stars and Grahamstown Brumbies, were knocked out in the semi-finals. It was just an indication of how competitive and unpredictable the tournament was.

In the first semi-final, the Brumbies lost in extra time sudden death to a determined Titans side who made full use of their opportunities and capitalised on Brumbies mistakes. Brumbies, in the process, had many scoring opportunities but didn’t convert them into points. In the end, Titans scored first in the left-hand corner in extra time sudden death and were declared the winner.

The second semi-final saw the hosts knocked out by a clinical performance by Progress, who ran out 24-0 winners. It was an uncharacteristic performance by the host Stars. Progress saved their best performance of the day with a dominant win. Progress made their intentions very clear from the outset and put constant pressure on the hosts until the final whistle.

The final was a closely contested affair, with Progress setting the pace and scoring first through Yaniek Hare, converted by Brandt Fields, to take an early 7-0 lead. But it was Titans who fought back brilliantly with some solid defence that saw Weslin Tye dived over. Progress’s excellent ball skills and attacking prowess came in handy and were a constant threat to the opponents who started feeling the pressure. Progress’s instrumental captain led from the front while Brandt Fields was the playmaker and architect in the backline as their side began to take the game away from Titans.

Two further tries came from Brandt Fields and Romario Fields as the champs started to run riot in the second half. Titans started showing fatigue in the second half, allowing the fitter Progress side to dominate in open play. In the end, Progress proved too strong for Titans and ran out deserved 19-5 winners and were crowned the 2022 Trying Stars 10’s Champions.

Progress’s start playmaker Brandt Fields was voted Player of the Tournament by the LOC and Referees. Fields delivered a consistent all-round performance throughout the day and was the key figure in his side’s backline. He was instrumental in most of the tries scored, and his attacking prowess and decision making put his side on the front foot. He was also the Top Points Scorer in the Tournament.

Progress received R5000 and Titans R2500 as Prize Money for winners and runners up.

According to Stars President Divan Cannon, the tournament’s success was thanks to the LOC.

“To see the Wentzel Park Ground full again, it’s a feeling I can’t describe. It is just a pity for the other teams who had to withdraw from the event.

“It is very rare that our practice field is packed in the first week of January, as it tells us that the players are hungry for rugby. Our preparations for the upcoming Super 14 are going well; the 10’s laid a good foundation for our preparations.

“Our coaches are currently sitting with a headache because they don’t know how to select the group, as the practice field is full.

“We want to say a big thank you to the referees/match officials, the media to add to the success of the day, and of course, our beloved supporters for their unbelievable support until the end watching the final even when we were knocked out in the semi-final. They received value for their money.

“We are looking forward to our Annual 7’s Tournament in October/November later this year. We also want to thank our sponsors, Alexandria Butchery and Alex Savemor, for their continuous support and contribution.”