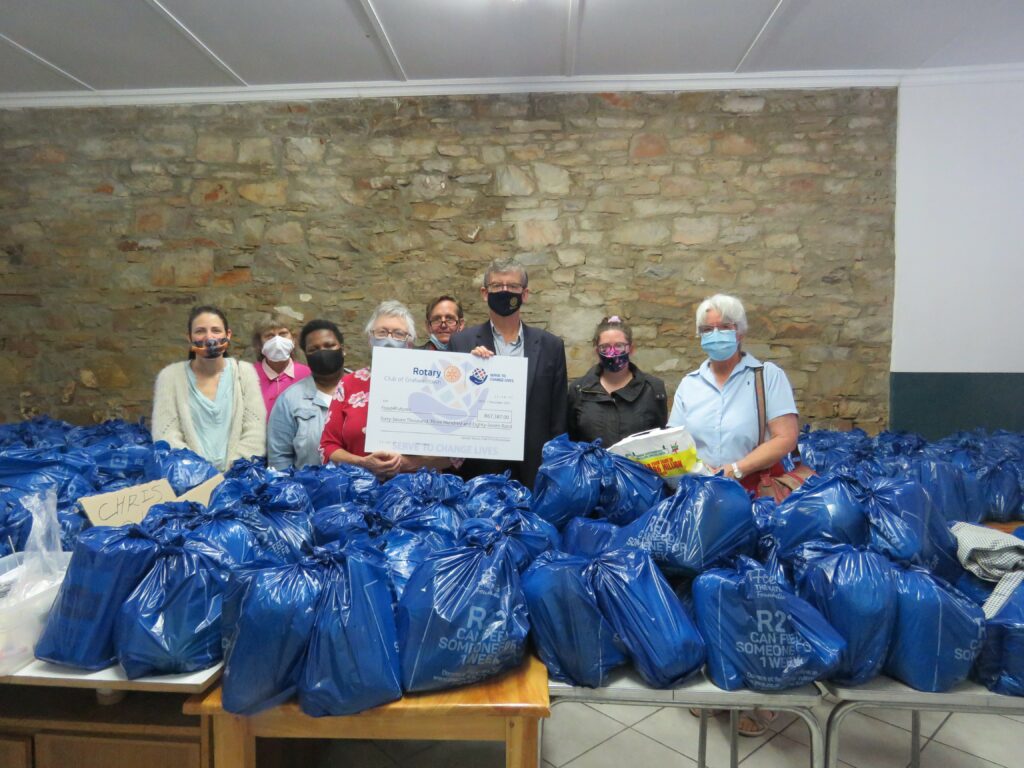 The R134 774 raised is a Rotary Club fundraising record, the successful combination of its online and live ‘Grand Finale’ auction.

F4F’s Mary Birt said her organisation was “privileged to be considered worthy of support alongside Grahamstown Hospice which has, for many years, been an inspiration in community service”.

“Our grateful thanks to the Rotary Club of Grahamstown for the sizeable donation and congratulations on such a wonderful event,” Birt said.

“We have 160 people/families on our list of parcel recipients. An estimated 800 people receive food support from the parcels. We distribute parcels and sandwiches every two weeks at an approximate food cost of R40 000 a month.

“So, the Rotary donations will pay for six weeks’ worth of parcels every two weeks. This is a sizeable donation for us. Our parcels are all one size. They are not sufficient to last a family for two weeks, but it does help, and it is enough for two people.

“Every Tuesday, we also have sandwich packs available for anyone who doesn’t receive a parcel. We make 200 sandwich packs – three peanut butter sandwiches per pack.

For the special Christmas parcels, “the ‘parcel recipients’ receive double size parcels and sandwiches and the ‘sandwich people’ receive a small parcel and sandwiches,” Birt said.

F4F also collect clothing, shoes, bedding and household items all year round and distribute those when they have sufficient stock for distribution.

The Christmas Distribution is on Thursday, 16 December – items have been collected since August, and F4F have a sizeable amount to give away.

“We allow anyone who comes on the day to choose some items to take home,” Birt said.

If you’d like to partner with Food4Futures, you can find them at 2 Dundas Street, Grahamstown/Makanda.