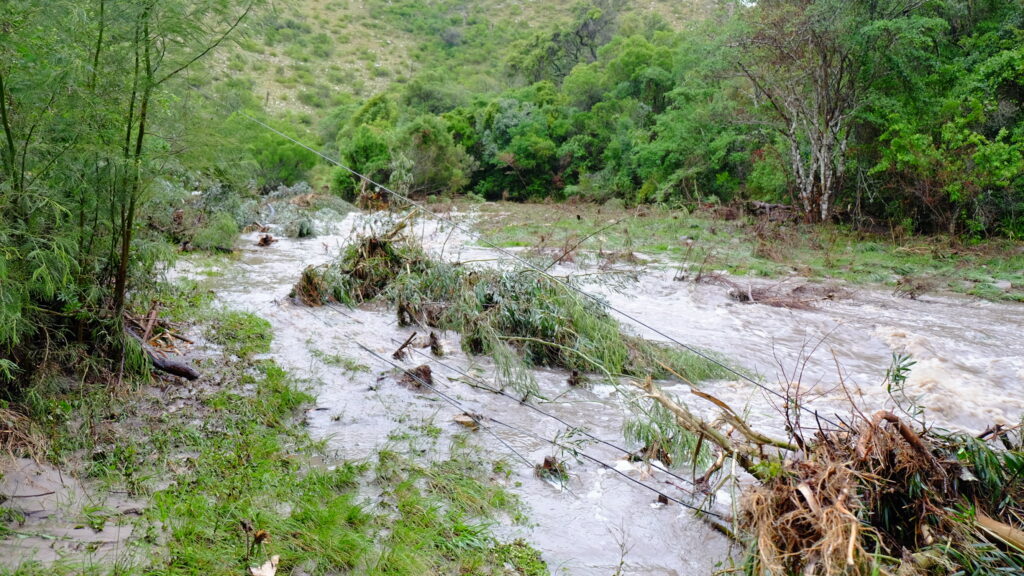 Makhandans were caught off-guard by an unscheduled cloudburst on Sunday afternoon.

After the welcome deluge, Jim Cambray recorded just under 50mm of the wet stuff.

As the storm broke, fellow pluviophile Robin Stobbs exclaimed, “Now THIS is what I call rain – real rain. I can hear it, see it, feel it and smell it.”

Meanwhile, a kilometre from Stones Hill towards Port Alfred Grocott’s counted at least five uprooted trees blocking a portion of the road. The Fire Department reported that Road Maintenance had been called and were on their way to clear the road by 5 pm.

But, WhatsApp messages from distressed motorists indicate there may be as many as 25 trees blocking the Makhanda-Port Alfred road. Motorists are advised not to travel on this route for the foreseeable future.

The inflow into Howieson’s Poort Dam was strong this afternoon. Grocott’s Mail will monitor the dam levels over the week, but hopes are high that Howieson’s will overflow and begin to top up Settler’s Dam, Makhanda’s main supply on the city’s western side.

In a Facebook post, they reported that no one was at the pump station, and the door and some windows were open.

They found that there was “only one pump and two motors in the building, where there should have been three pumps attached to three motors. The one pump and motor seemed to be in use, and the electrical boxes upstairs were lit up with red and green lights.

“Several questions arose from the oversight visit, and they will be asked at Council: why are such strategic municipal assets missing, where are the other two pumps and one motor, is the standalone motor without a pump operational or not, and why is the building that houses these vast pieces of machinery and intricate electrical equipment left unsecured?” the post said.