From poverty to professor: Ngcoza’s journey inspires all 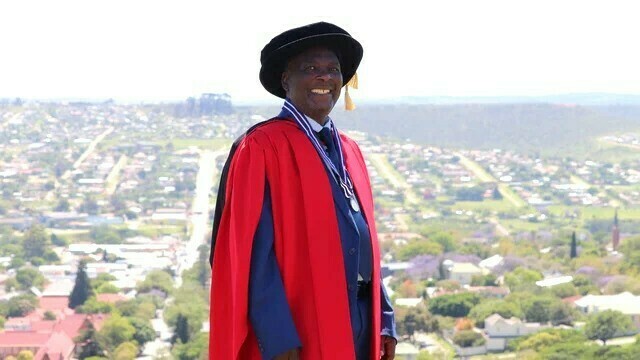 For newly-inaugurated Professor, Kenneth Mlungisi Ngcoza, Rhodes University was once “a faraway promised land never to be reached”.

Prof Ngcoza was born and raised in Makhanda, and his passion for education stems from his background.

In an inaugural lecture titled ‘From poverty to University: Journeys, Challenges and Opportunities’, Prof Ngcoza said that although poverty commonly refers to lack of food, lack of access to education can also be seen as poverty.

He spoke of his childhood experiences and the sacrifices that his parents made. He also alluded to the division between the ‘haves’ and the ‘have nots’ in Makhanda when he was growing up.

“Through all the physical, social, and psychological divides, my mother was determined that I would reach the faraway promised land, which was Rhodes University. She used to tell me that “one cannot start a fire with logs, but with twigs”, he said before breaking into singing ‘Wena Nkosi uyazi‘ (it is only God who knows His plans for you).

He commended the Nine Tenths’ hand-up’ program by Rhodes University in collaboration with GADRA, which has opened doors for learners from disadvantaged schools in Makhanda.

Ngcoza has served as the Chairperson of the GADRA Education board for a decade and has served on its board for 20 years.

In congratulating Prof Ngcoza, Rhodes University Vice-Chancellor, Dr Sizwe Mabizela, said: “This is a significant milestone in Prof Ngcoza’s academic career. His is a story of many local high school learners who have studied and graduated at Rhodes University. A journey from poverty to university.”

He is a qualified science and mathematics teacher who has been an Associate Professor in Science Education in the Faculty of Education at Rhodes University. He is also the coordinator for several courses at the University. Additionally, he is a former deputy chairperson of the Education Higher Degree Committee (EHDC).

Apart from his impressive achievements, he boasts broad academic research interests, including science curriculum, indigenous knowledge systems, professional development, and Education for Sustainable Development. He has co-published several journal articles from his research and is also a reviewer for the following journals: AJRMSTE, SAJEE, Pythagoras, and Cultural Studies of Science Education. He has also been involved in some international collaborative projects.

Prof Ngcoza, who is affectionately known as ‘Mthembu’ (his clan name) by his students, said: “This honour humbles me. Indeed, this is a significant milestone for me, and I believe it is reflected in the title of my lecture.”

He acknowledged his late parents. “I have heard many people on occasions like these saying that they wish their parents were there. They are here, and they are much stronger in spirit, and I know that they are here with me tonight,” he said.

Mthembu also thanked his wife, Nobuntu and son, Nkosiphendule, for the contributions that they have made to his life and academic journey. “To my wife, who has been with me for 35 years now, my pillar of strength, I don’t know how she manages to support a busy man like myself, but I am grateful,” he said.

He extended acknowledgement and gratitude to his colleagues from the Education Department, GADRA Education and local and international academics he has worked with during his academic career. This gratitude was further illustrated by him singing ‘Wandithatha la, wandibeka la‘ (loosely translated, He took me from here and put me there).

Ngcoza hopes that curricula start to incorporate references to learners’ experiences at home (from various socio-cultural backgrounds). “The disjuncture between school and home can pose negative effects on learners and students,” he said. Prof Ngcoza urged universities to make it a priority to reduce dropouts of students. “We should be devoted to research best practices in South African universities and internationally in efforts to reduce dropouts of students,” he added.

“The success of our community engagement projects is due to the building of a community of practice. This culture is informed by principles of Ubuntu, respecting each other’s ideas and valuing every contribution,” he concluded.

We all have Ubuntu, and he ended with a statement, “Nazi iinyawo, nantsi indlela” (which translates to – here are the feet and here is the road).

Previous ArticleLast U3A lecture for 2021: the curious story of Elizabeth Salt
Next Article Dust off that script!