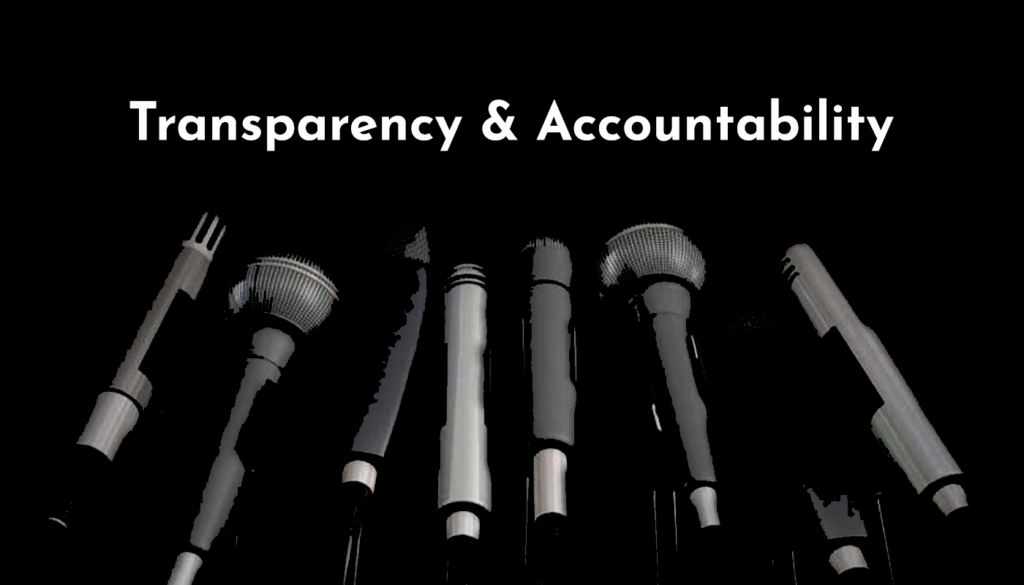 Transparency and accountability are key values of ours at Grocott's Mail. Image source: My Leaders, https://myleaders.in

It’s been a strange news week – a surprise around every corner as the day of the Makana Council inauguration drew near.

On Monday, we received an official news release from ANC Provincial Secretary Lulama Ngcukaytobi that our new mayor would be Nomhle Gaga. But, on inauguration day, we found that former speaker Yandiswa Vara had been sworn in as Makana’s mayor. Our readers greeted it as a happy surprise.

But, soon after the inauguration, we learned that Yandiswa Vara would be leaving soon – to be replaced by Gaga, in all likelihood. These shenanigans evoked a mash-up of competing emojis in Grocott’s Mail readers: surprise, dismay, anger and hilarity.

It turns out that Nomhle Gaga is indeed the ANC NEC’s choice of mayor for Makana, as stated in the press release. And Yandiswa Vara was the NEC’s choice for speaker of the Sarah Baartman District Council.

But, according to the Municipal Structures Act, these resignations and swaps could only be done after Tuesday’s inauguration.

This is why Yandiswa Vara was sworn in as our mayor. And why she is likely to leave. The ANC is playing a game of musical chairs to get the outcome it desires.

We were confused, and Makana’s citizens were confused. Yet, all of this could have been prevented if the ANC had simply explained why Yandiswa Vara had been installed as a ‘placeholder’ mayor.

Instead, the ANC’s Sarah Baartman region Scara Njadayi told Grocott’s that this was an “internal matter”.

“If there are any developments, the public will be informed in due course,” he said.

In our view, this was not an internal matter. It was a matter of considerable public importance.

Why would the ANC risk further damaging its reputation in a city that delivered it a meagre one-seat majority in the local Council?

And why is the ANC intent on recalling a mayor who the ANC itself removed after 22 000 signatures were delivered to Bhisho on 9 November 2018, calling for the Gaga-led Makana Municipality to be placed under administration and the Council to be dissolved? This was the most significant mobilisation of Makhanda’s citizenry in the democratic era. Are those 22 000 people about to receive a slap in the face?

These are still questions. But, we are told that we may be “informed in due course” if there are developments.

This is not good enough. We need clear, transparent communication in our city.

We regret being complicit in publishing an incomplete story on Monday. But, we believe that the organisation responsible for producing and transmitting the incomplete information that undergirded that story – the ANC – should hold themselves to the same standards.

Grocott’s is an accountable and transparent news organisation. We welcome criticism, we will always apologise for missteps, and we are committed to doing better. Despite the enormous economic challenges facing local media globally and in our city, we remain committed to producing free public information to the best of our ability.

We are planning to profile each of the 27 councillors on the new Council, which will undoubtedly improve our ability to communicate directly with this region’s elected representatives in the future. We will also publish Councillors’ contact details, allowing citizens to demand direct accountability from their Council.

As we move into the last few weeks of the year, Grocott’s Mail will be winding down in pace. This month, we have been mainly without student journalists to assist in coverage. As mentioned in the previous edition of GMDirect, we will not publish an edition for a few weeks until the start of the academic year in 2022. Still, we will bring you news through our website and our social media pages as and when it occurs.

If you would like to provide us with feedback on our reporting, please feel free to email us at grocottseditor@ru.ac.za or text us via Facebook Messenger.

Previous ArticlePalesa Care: Ending period poverty
Next Article A back-up plan for refuse removal is on the way, says DA