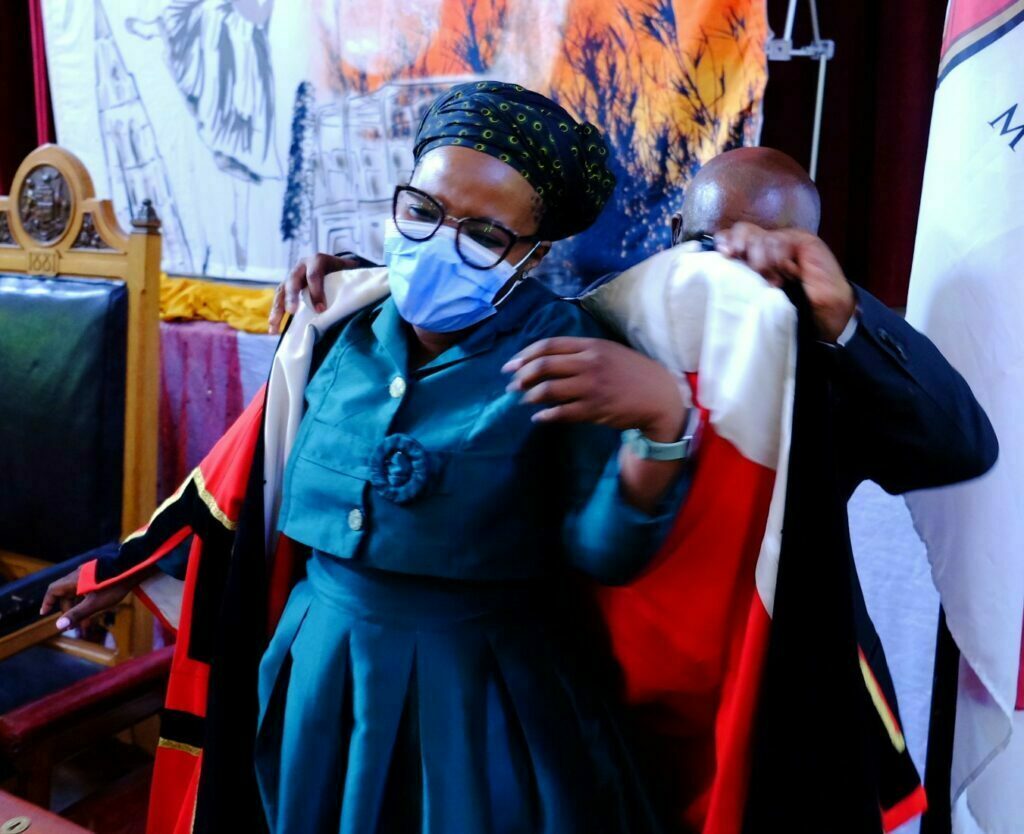 Councillor Yandiswa Vara is helped into the mayoral robe after being elected Makana Mayor during the Council inauguration ceremony on Tuesday 23 November. Described as a "placeholder" mayor by the Democratic Alliance's Luvuyo Sizani, she will likely hand to robe over to Nomhle Gaga soon. Photo: Rod Amner

Smiling South media reported that sources, including Vara herself, said her mayorship was temporary “until details of her swap with district councillor Nomhle Gaga could be finalized”.

On Tuesday, Vara’s election as mayor at the new Makana Council’s inauguration in the Makhanda City Hall was a surprise as it contradicted a press release issued by the ANC Provincial Secretary Lulama Ngcukayitobi on Monday. The press release clearly stated that Nomhle Gaga would be Makana’s mayor.

Gaga was removed as mayor in November 2018 by the ANC’s regional executive committee in the wake of ballooning debt, collapsing infrastructure and service delivery protests. Over 22 000 signatures were delivered to Bhisho on 9 November 2018, calling for the Makana Municipality to be placed under administration and the Council to be dissolved.

But, in a bizarre twist, it now appears Gaga is set to step back into the post once Vara makes a move to the District Council.

Monday’s ANC press release stated that Vara had been slated as the new Speaker for the Sarah Baartman District Council – and it now appears that is where she will end up.

The Democratic Alliance’s (DA) proportional representation councillor Luvuyo Sizani said his party understood that Councillor Vara “is little more than a placeholder and that the ANC’s ultimate intention is to replace her”.

“We may therefore have another mayoral election in the weeks to come,” Sizani added.

On Wednesday, 24 November, regional chairperson of the ANC’s Sarah Baartman region Scara Njadayi told Grocott’s that “anything relating to the changes on the initial pronouncements by the provincial secretary is something that is handled internally within the parameters of the organization”.

“If there are any developments, the public will be informed in due course,” Njadayi said. “The ANC elected Yandiswa Maya Vara as the mayor. She is expected to serve and service the people of Makana.”

When asked to comment on reports of Vara’s immanent swap with Gaga, Njadayi said he couldn’t comment further on the matter.

While Nomhle Gaga was named the ANC NEC’s choice of mayor in the Monday press release, Gaga was on the Sarah Baartman District PR list, not the Makana list. To be sworn in as mayor, she needs to resign from the district council. At the same time, a Makana councillor would need to quit.

According to the Municipal Structures Act, this could only be done after Tuesday’s inauguration.

Makana Citizens Front (MCF) proportional representation councillor Philip Machanick said, “it remains to be seen” whether Vara’s surprise election as mayor meant “there was a change of strategy” or “there will be a switch later”.

Meanwhile, Grocott’s Mail readers reacted with a mixture of disbelief and anger on Facebook on Monday to the news that Gaga could return to Makana’s top post.

But, the negativity dissipated when Grocott’s broke the news of Vara’s induction on Tuesday. And City Hall erupted in ululation and song when Municipal Manager Moppo Mene announced the election result.

The MCF’s Machanick said if Gaga did return as mayor, “it will be a big slap in the face for all those who signed the petition”.

The new Makana Council elected representatives of three political parties onto the Sarah Baartman District Council – the Economic Freedom Fighters (EFF), the Democratic Alliance (DA), and the African National Congress each have one representative.

The previous District Council had two ANC representatives and one from the DA.

MCF’s Machanick said, “As a local civic movement, we are happy for others to represent us at District, and we now have three parties to call on if we need issues taken up at that level.”