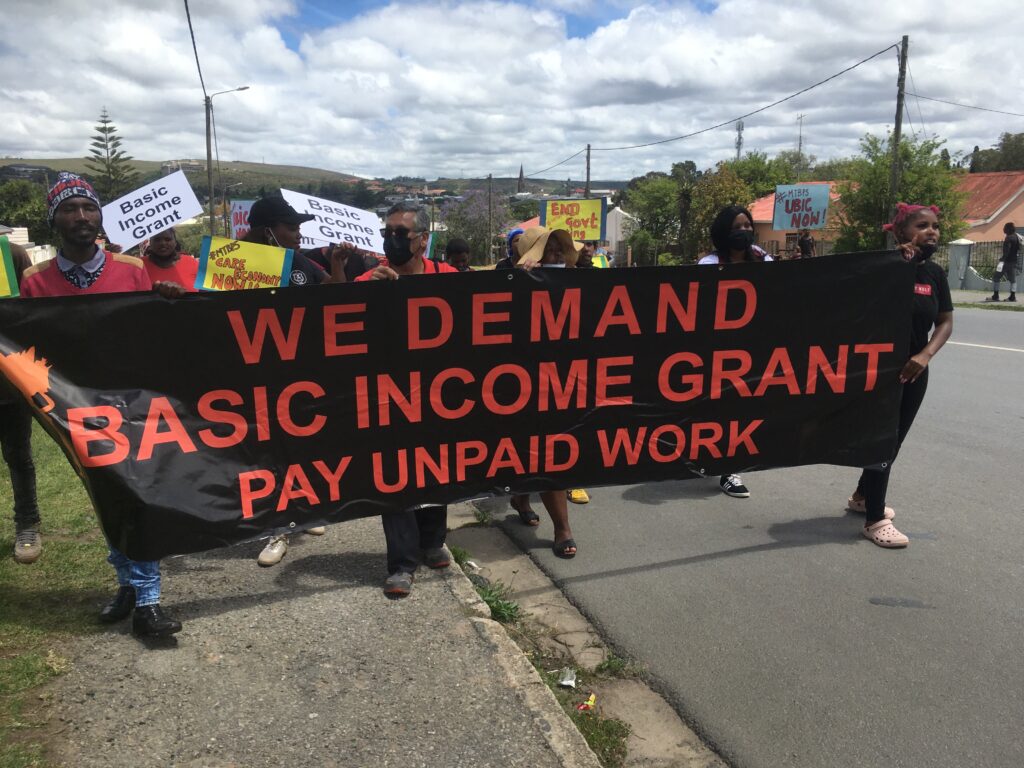 Sixteen women and four men gathered on Thursday, November 11, at Freedom Square to discuss the implications of the Medium-Term Budget Policy Statement (MTBPS) 2021 for pro-poor planning and the upliftment of indigent people. They followed up with a short march near Fingo township.

Scheduled for the day that the new Finance Minister Enoch Gondanwana was to table the MTBPS 2021, Makhanda’s protest action, organised jointly by the Unemployed People’s Movement (UPM) and the #CodeRed Feminist Collective, was one of many protests and pickets across the country. Marches were held in Cape Town (with a large contingent outside Parliament as the Minister read his budget speech), Johannesburg, Gqeberha, Mbombela and Bloemfontein to put pressure on Treasury and Government to create a pro-people’s budget framework.

In Makhanda, the singing of struggle songs was punctuated by the banging of empty pots and pans, giving visibility to the slogan, “We are hungry, we are angry” made popular by the organisation Cry of the Xcluded.

Days of planning focussed our discussions on the possibility that the Finance Minister would announce a Family Grant (to replace the proposal for a Universal Basic Grant or UBIG), which would be paid to ‘heads’ of families.

Also possible were projected cuts to social spending and a likely ‘business as usual’ budget which would foreground business investment and fiscal consolidation. All the groups that collaborated in the separate actions across the country were clear that what is needed is a visionary, transformational budget framework that would be gender-sensitive, focus on growing unemployment and inequality, job creation, address disruption of education, especially in township schools, create a disability grant, improve healthcare and the expansion of essential services.

Also, at the top of our agenda was the continuation of the so-called Covid grant of R350 beyond March 2022 and a grant that takes account of the food poverty line of R650, at the least.

Projections made by the Institute of Economic Justice and other research initiatives show that between 9 to 12 million people would go to bed hungry if the Covid grant of R350 were discontinued. In other words, all the organisations involved want a budget that ensures social protection of the most vulnerable in our society.

At the moment of writing, analyses of Minister Gondonwana’s MTBPS 2021 are coming in thick and fast on social media and all news channels, and it is still too early to make complete sense of it. But what seems clear is that the government has failed its people once again.

As some analysts have described it, the MTBPS is a ‘plodding’ ‘underwhelming’ and ‘uninspiring’ budget framework. In the days ahead, organisations will re-group to consider the full implications of the Minister’s proposals and continue to offer alternative visions of a genuinely pro-people’s budget.