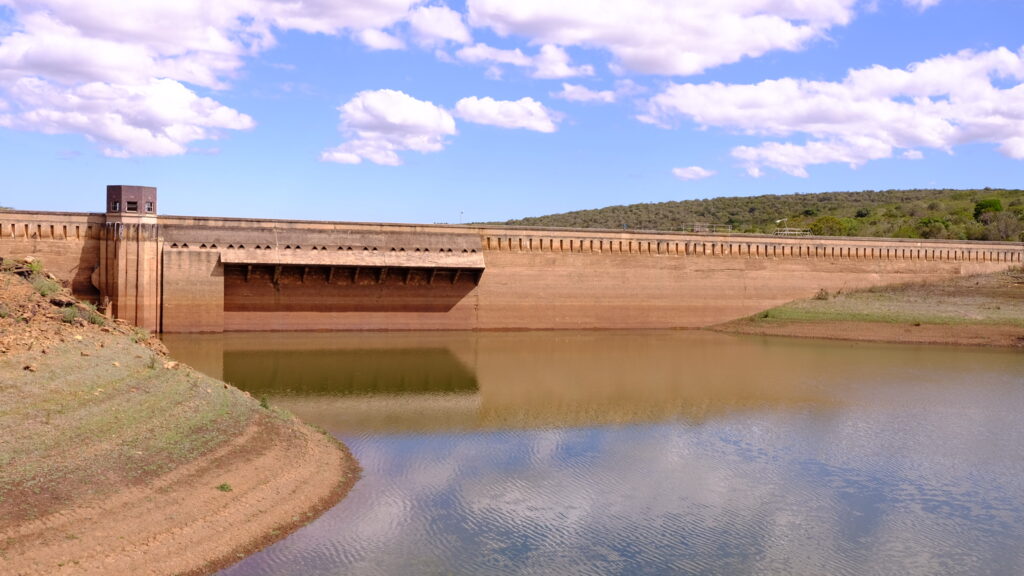 Howieson's Poort Dam at 3 pm on Tuesday 9 November. Runoff from the recent soaking rain is flowing into the dam, and water is being pumped to the Waainek Water Treatment Works. The dam level, still precariously low, will hopefully improve over the next few days. Photo: Rod Amner

Phase 2 of the upgrade to the James Kleynhans Water Treatment Works (JKWTW) will be complete by the end of March 2022, according to Amatola Water, the implementing agent for the upgrade.

And there will be an “increased water supply in December 2021” from JKWTW for Makana’s December holiday season, said Amatola Water spokesperson Nosisa Sogayise.

Meanwhile, run-off from the recent soaking rains is entering Howieson’s Poort Dam and being pumped back to Makhanda from the west.

According to Makana Municipality spokesperson Anele Mjekula, the plant is operational despite being unused for some time. “It needed six hours to recharge the pipeline and there were no subsequent hassles,” Mjekula said.

Last month, Grocott’s reported that the long-stalled upgrade of James Kleynhans Water Treatment Works had been delayed further – until June 2022.

The revision of the deadline back to March 2022 is good news for beleaguered Makhanda residents, many of whom have struggled under the Makana Municipality’s strict water rotation system. Some high-lying areas have been without water for weeks at a time.

However, the recent emergency shutdown and repair at JKWTW has accented the ongoing precarity of Makana’s water supply. The increase of the water level at Howieson’s Poort has brought welcome respite.

Howieson’s was at 23% capacity on Wednesday, 10 November. The level must be a minimum of 20% for the plant to operate at full capacity, Mjekula said. “However, without a continuous feed, the dam can get depleted in less than a week. Hence, the Waainek treatment plant is often operated at 50% when levels are low so that we can prolong the availability.”

About 35mm rain was recorded in the catchment in the past week. Water first filled the underground water table before enhancing the dam level – by a meagre 5%.

This 5% increase in the dam’s level equates to about 44 megalitres, which can supply Waainek for about five days if the treatment plant is operated at full capacity, Mjekula said.

The most recent James Kleynhans Water Treatment Works (JKWTW) upgrade contract was awarded by implementing agent Amatola Water to Mamlambo Construction in January 2020 and was expected to be completed by March 2021.

The upgrade – when completed – will double the waterworks’ pumping capacity from around ten megaliters a day to 20, which would be enough to supply the entire town. The city uses between 18 megaliters a day, according to the Makana Municipality’s water crisis web page. This could effectively end the water supply crisis facing the town.

Amatola Water’s Sogayise said the project has been delayed due to the “pandemic and contractor cash flow challenges” but that “Amatola Water has intervened to ensure the phase is running smoothly”.

Mamlombo Construction was awarded the contract for 14 months, which ended in July 2021. However, after Covid and the lockdown, the completion date was revised to September 2021, according to Amatola Water.

“The new contract completion date is March 2022; however, Amatola Water intends to effect penalties from 21 September 2021 as the contractor is in breach of contract,” said Sogayise.

Sogayise did, however, say they should be able to “accommodate Municipal demand” by December 2021.

Before the drought, only Makhanda East received water from the James Kleynhans Water Treatment Works. The Glen Melville Dam supplies James Kleynhans and gets its water from the Orange and Fish River systems. According to Makana’s water crisis resources web page, the water treatment works currently has a pumping capacity of 10-12 megaliters a day.

When operational, the Waainek Treatment Works supplies the western side of the town and receives its water pumped from the Howieson’s Poort Dam, above Settler’s Dam. The western side has a pumping capacity of about eight megalitres a day. For much of last year and this year, Waainek has not been operational because the dam levels at Howieson’s Poort and Settlers’ have been too low to pump.

This means that most of the town must get water pumped from the James Kleynhans Water Treatment Works. However, the municipality has implemented a rotational system because it cannot pump enough water to the city.

Peter Sturrock, a retired civil engineer with experience of working on bulk water projects which is a member of the Makana Residents Association (MRA), said the Municipality is doing “a reasonable job under the circumstances”.

“There is water fairly consistently on alternate days, although some areas are having it much worse. However, the reality is that, had the situation been managed properly from the outset, this situation would not have arisen,” Sturrock said.

Last month, the MRA released a detailed statement titled ‘In 2021 why is James Kleynhans not Updated’, which lays out the timeline of the costly failed upgrades for the James Kleynhans Water Treatment works over the last decade.

According to the MRA, the main problem is not the supply of water to the Makana water system but “the ineptitude of the running and maintenance of the plant”.

“The increase of water capacity to 20 megalitres a day leads to more leaks, burst pipes, road potholes, sewage problems, and electrical problems. Filters, valves, pump sets, etc., need to be replaced over and over again,” the MRA report stated.

The upgrade – which was initially set to be completed by 2017 – has been abandoned multiple times due to payment and performance issues between the Municipality, contractors and implementing agent, as detailed in the MRA’s statement.

The Department of Water and Sanitation is funding this iteration of the upgrade, and Soyagise says that “there have been no financial disputes in the project”.

Here is a sampling of the problems at the James Kleynhans Water Treatment Works, from February 2019 to September 2021, detailed by the Makana Residents’ Association (MRA).

Previous ArticleWhat was behind the (very) low youth turnout in Ward 12?
Next Article South Africa’s local government is broken: could the 2021 election outcomes be the turning point?