Curious Buchule gets a medal 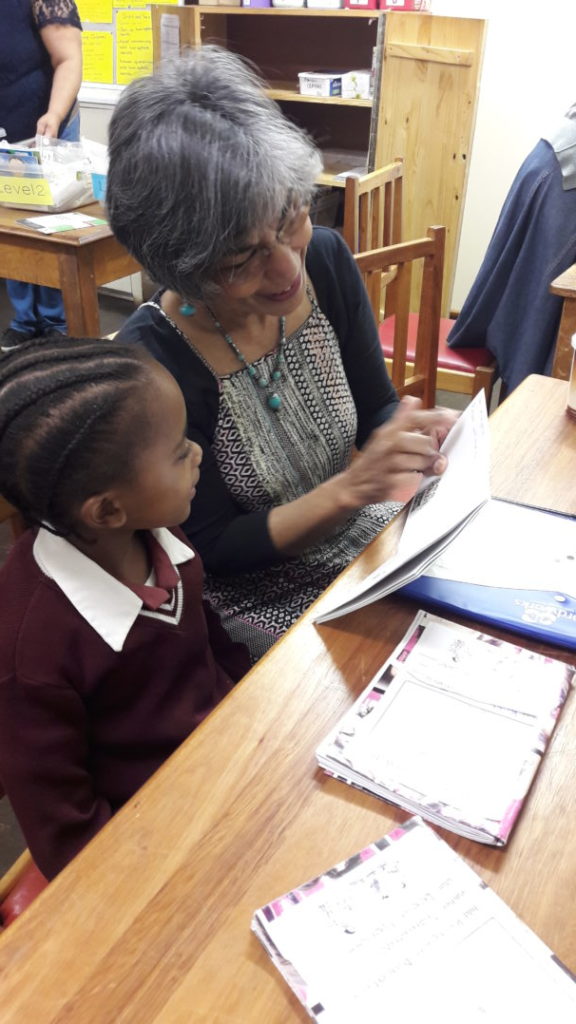 “Buchule, how was your birthday?”

“It was good, Teacher. There was cake, and my friends came to my house, and I drank champagne.” Naturally, I am taken aback by the words that had just exited this nine-year-old boy’s mouth. He notices my look of disbelief as he says with a chuckle: “It was non-alcoholic, Teacher. How do you spell non-alcoholic?”

Since April, when I became his Project Read tutor, I’ve become aware that this is who Buchule is. When he hears a new word, he refuses to move on with his life until he knows what it means and how to spell it. So, ‘non-alcoholic’ was the first new word for the day.

He walks over to our usual desk and proceeds to take his writing book out of its packet. He knows our routine. We always start with sentences.

“Today, I want you to tell me what you did for your birthday in five sentences.”

I can hear that dimpled smile behind that mask. Challenge accepted.

Clutching his sharpened pencil, the warrior puts his head down and begins to think. Occasionally, he scrunches his eyebrows and tapped his pencil on his chin. I believe he adopted this habit from the cartoons he watches. After 10 seconds, his brow relaxes, then he quickly starts writing away in his book.

“I’m done, Teacher!” says Buchule, with a twinkle in his eyes. He rarely makes any grammatical or spelling mistakes.

Buchule did not have to be enrolled in the Project Read programme, but his teacher agreed to let him continue this year to allow him to be more mentally stimulated. Ever since he started Grade 1 at George Dickerson Primary School, he has never struggled with English literacy and comprehension. It came so naturally to him that his teachers and the volunteer programme tutors were a little shocked. Who could blame them, given the state of South African early childhood literacy levels?

So how is it that little Buchule, whose home language is isiXhosa, has been able to excel in English?

“Great work! You can go choose a book now but don’t pick one you have already read!” I say. He jumps out of his seat and walks over to the mobile library at the front of the room. I’m so amazed at how tall he is now. When I first met him in March last year, he was a short boy with the most prominent brown eyes I have ever seen. But his contagious smile is the same, accompanied by a dimple on each smooth cheek.

Most of the kids on the programme choose a book quickly. Not Buchule. He tends to take his time, eyes scanning the covers. After two minutes or so, he calmly walks back, clutching a bright yellow book in his hands.

“This one teacher” – Curious George Gets a Medal. How appropriate. Having Buchule read is very relaxing. There is always evident confidence in his voice, which never falters. He immerses himself into the story he reads, naturally changing his tone slightly when he reads certain words. It’s almost as if he is no longer in that small, cramped room. He has entered the world of the book.

On this particular day, Curious George contained some new, big words for Buchule.

“L-ABO…” “LABO-RA-TO…” This was a new one. Those brows begin to scrunch up again, and his finger repeatedly scrolls across the word. “LABO-RATORY?” he says as he hopefully glances up at me.

“Yes, that’s correct. Smart boy,” I say. “Now, can you guess what a laboratory is?” Oh boy. There go those eyebrows again.

Buchule was born in Makhanda as a typical South African kid. He grew up living with his grandparents in Vukani Location while his mom was off studying at Fort Hare. Yet, she made a trip home every weekend to be with her son. Growing up, he was always seeking answers to questions. By the time he was three, he was watching the evening news with his grandparents. Soon, pointing out the various political figures and yelling their names was standard in the Ncazela household.

His mother, Akhona, was determined to pass over the values her parents had instilled in her, including an appreciation of education. “My mother always had conversations with him about valuing education. She would like to point him to follow in my footsteps by going to university and working hard to get there,” Akhona dotingly explained.

Books were introduced to Buchule by his mama and his late mkhulu (grandmother) from a very young age. By four, Akhona chose to buy him more books instead of toys to satisfy his curiosity.

Not only did Akhona encourage reading, but also understanding. “I always tried to make sure that if he’s reading something, he needs to have an understanding of what it actually means. Being able to read is one thing but understanding what is happening in the story is another thing.”

In 2018, Stats SA revealed that nearly half of South African children never had a parent or guardian read to them. Scientifically speaking, not exposing children to literature from a young age delays brain and language development.

We return to Buchule’s storytime.

Once he had finished reading, I say, “You read super well. Thank you, Buchule.”

Those big, pride-filled eyes looked at me. “Pleasure, Teacher.”

I make a mental note of the words he struggled with, for coming up next is his spelling test.

“Okay, I’m going to challenge you now. You have five minutes to read through these words; then, I will test you and see if you can remember how to spell all the words. That fine?”

“I only need three minutes, Teacher.”

Once the three minutes are up, the test begins, and Buchule neatly writes his answers in his activity book:

“Not bad, Buchule,” I say, giving him a high five.

If Buchule was not in school, he says would get a law degree and practice as a lawyer because “a lawyer always protects people”. With R10 000 he would buy a BMW. It would be red – it could not be any colour other than red.

He would also have laser eyes because who wouldn’t want to have laser eyes as a superpower? Buchule would also go to space, become an actor and buy his very own house. He would be best pals with Brazilian soccer star Neymar, the funniest person in the world. He’d also eat pizza every day with a Fanta on the side.

One thing that makes Buchule sad is when someone scolds him. He cannot stand the feeling of disappointment, not only for himself but for others, too. His mother, Akhona, giggled when she explained how much pride he takes in his education. “At the end of Term 2, a few of his final marks dropped, and he called me crying because of this. I reassured him that it was okay. But when I saw his report, I couldn’t figure out why he was so upset. Then he pointed out that it was because one of his subjects changed from being in the 90s to the 80s.”

Through conversation with his mom, it also became apparent that he is fiercely devoted to family. “Buchule wants to be there for people, and I know this is something he learned from watching my mama.” Mrs Boniwe Ncazela opened a disability centre in Extension 4 a few years ago because she wanted to help those in need. Buchule would accompany his mkhulu on some trips to the centre during the holidays.

“I know he loves helping people not just because he’s seen us in his family do it, but because it brings him joy. One day, he came home from school and told me that whenever he sees someone struggling with something that he understood, he must always go and help them. He also wants to see his friends succeed.” Buchule once indicated to me that helping others is his greatest joy. “I show people I care about them by helping them. This also makes me very happy, Teacher.”

At the end of our Project Read sessions, I always find myself feeling content. I don’t know if Buchule realizes how much fun I have been his tutor. Before he runs off, Buchule gets to choose one book to take home until his next session and always gets to choose a sticker as well.

My treasured moments with Buchule have driven me to believe this simple idea: Buchule’s gifted reading ability should not be considered abnormal in this country. Every child should have the opportunity to flourish on their school journey.

Literacy bestows an invaluable gift of growth and knowledge. Being able to read is what has taken Buchule around the world. It has flown him to lands where Gruffalos roam free, animals speak to humans and children fly to space. It has taken him on adventures to explore the highest mountain peak and the deepest ocean. It has challenged him. Forced him to learn. Allowed him to grow.

No matter their circumstances, every child should grow in confidence to dive into any book placed before them. They should be allowed to set off on their literary journey armed with a pen that will never run dry and a mind that will always seek knowledge.

I place the neon yellow smiley face sticker on Buchule’s left breast. He wears it proudly like a medal of honour. “Bye-bye, Teacher,” he says with smiling eyes before heading out the door.

Project Read, also known as the Ready, Steady, Read and Write Programme (Wordworks), is an English language and literacy development programme. Facilitated by the Lebone Centre and volunteer tutors, the programme runs at George Dickerson and Good Shepherd Primary schools for Grade 1 and 2 learners weekly.

This programme is a part of the Lebone Centre’s mission to address the issue of illiteracy in South Africa by helping learners grow in their ability to confidently read for meaning by Grade 4.

If you would like to volunteer for this programme or find out more about it, please contact:
Lebone Centre: 046 622 7985 or Cathy Gush: gush.cathy@gmail.com Previous ArticleIt is never too late to get that PhD, ever!
Next Article Election debutants off to a good start