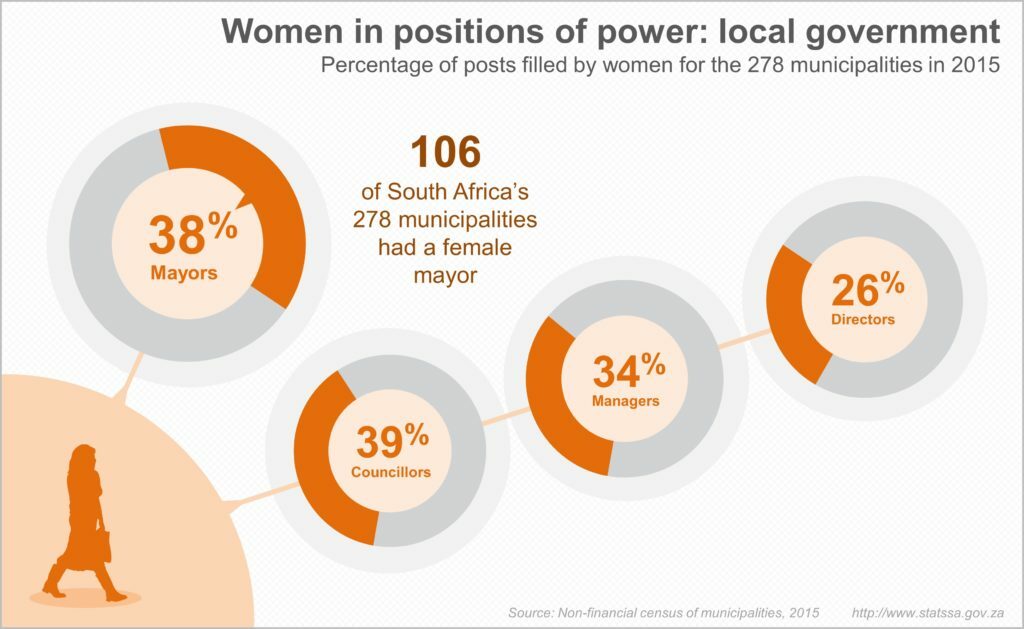 It’s fair to say that representative equality (equal numbers of all genders on a party list) can’t tell you much about whether a party will govern in a substantively equal way when in office (whether they will act in a manner that promotes lived gender equality for the citizens in the areas they govern).

South Africa is falling behind in gender representation at the local government level and has not gone far enough to promote LGBTQI+ inclusion and participation in elections. Now that candidate lists and manifestos are (mostly) out, there is room for us to consider whether things will be any better in the next five years.

What promises have been made for gender equality in 2021 manifestos?

At present, a layperson can’t assess the 2021 candidate lists released by the IEC in terms of their gender breakdown. A request to the IEC for this information has been acknowledged, but the information hasn’t yet been shared. It’s also fair to say that representative equality (i.e., equal numbers of all genders on a party list) can’t tell you much about whether a party will govern in a substantively equal way when in office (i.e., whether they will act in a manner that promotes lived gender equality for the citizens in the areas they govern). A better indication of their intentions is a consideration of party manifestos.

Specific and detailed commitments to women and LGBTQI+ persons can give us some indication that parties have a gender agenda, to begin with, and that parties understand that women and LGBTQI+ persons have specific needs, require targeted programmes, and can’t just be lumped together as “vulnerable groups” because this latter approach risks reinforcing existing inequalities between the marginalised. An intersectional approach is critical.

Sadly, reading through these manifestos leaves one feeling a bit disheartened about parties’ vision for a gender-equitable future that is inclusive. Women and LGBTQI+ groups are frequently conceptualised only as victims of crime, or as segments of “the vulnerable” and, far more rarely, as essential stakeholders in the country’s development.

ANC – the party will ‘defeat the toxic culture of patriarchy’

In its commitment to choosing the best people to run municipalities, the ANC also commits to encouraging and building capacity for gender-sensitive and gender-responsive budgeting and prioritising disability as a cross-cutting issue. Important to note is that, as the ruling party, the ANC introduced a framework on Gender-Responsive Budgeting, Planning, Monitoring, Evaluation and Auditing in 2018 (which the national Department of Women, Youth and Persons with Disabilities is supposed to lead). The department’s report on progress on this to Parliament in October 2020 still included a lot of “aims to” and “will do”, but it does seem that there has been buy-in from Treasury on this commitment.

To fight corruption and end wastage, they commit to overhauling government procurement to make it transparent and free of corruption and use it more effectively to promote the development of black- and women-owned businesses and cooperatives. In 2020 President Ramaphosa committed the government to 40% procurement from women-owned businesses (with no data on the current context or how it would measure this allocation). The DA rejected this call.

The ANC manifesto commits to revitalising arts and culture facilities and creating opportunities in these sectors, especially for women and youth, to build safer communities and unite communities. It also plans to revitalise safety committees that can accompany women and children when walking from one area to another.

The ANC manifesto focuses on GBV and ending violence against women and asserts that it will “defeat the toxic culture of patriarchy”. It commits to making sure homes, public spaces and places of work are safer for women and children, to dealing with the root causes of gender disempowerment and GBV and moving with speed to implement “the three pieces of gender-based violence legislation” and the ILO convention on sexual harassment in the workplace. It also commits to “discourage and act to tackle” hate crimes against the LGBTQIA+ community. Finally, it commits to ensuring that programmes of infrastructure development, essential services, housing and local economic development address the specific needs of women, people with disabilities, the elderly and children.

This sounds great, but an assessment of these commitments suggests we remain sceptical. We know that economic gender inequality drives gender inequality and disempowerment, yet the ANC does not mention women in the manifesto section on jobs, education or training for young people.

The ANC’s commitment to implementing three pieces of legislation on GBV doesn’t mention which three laws it means. One can hazard a guess that this refers to the three GBV bills passed in 2020. Still, given that we have many pieces of GBV legislation (Domestic Violence Act, Sexual Offences Act, Prevention and Combating of Trafficking Act, the Protection from Harassment Act, among others). Most of these are (poorly) implemented at the national and provincial levels; this is a vague commitment.

Of interest too is the commitment to working with the “multi-sectoral coordinating structure inclusive of all key stakeholders that have been created to deal with the plague of GBV in our society”. Although SA’s National Strategic Plan on GBV and Femicide commits to setting up a National Council on GBV, the Minister of Women, Youth and Persons with Disabilities issued a government notice that she “intends introducing the National Council on Gender-Based Violence and Femicide Bill, 2021 to parliament in the current financial year” this structure has not yet been set up – three years after the GBV Summit. So, the words “has been created” are optimistic at best, dishonest at worst.

The same can be said about the commitment to tackling hate crimes.

This June, the Department of Justice said that it had no means of pushing to expedite the passing of the Prevention and Combating of Hate Crimes and Hate Speech Bill, first introduced in 2018. The Bill lapsed in 2019 and was revived by the National Assembly this year. How your ANC local government councillor plans to change this is worth asking. Of course, a law doesn’t often prevent crime, so the ANC’s commitment to discourage and act to tackle hate crimes remains essential, regardless of the legislative status. A few details would be nice.

Finally, the ANC commits to building a non-sexist society committed to gender equality and gender parity in representation at a community level and to the appreciation of the role women play in society and communities. It again reiterates the commitment to ensuring that infrastructure, essential services, housing and local economic development address the specific needs of women, people with disabilities, the elderly and children.

So, the overall assessment is that the ANC’s local government election manifesto at least attempts to consider gender equality, at times with vagueness and others with overreach.

DA – Gender not even on the agenda

The DA, in contrast, does neither. In fact, the DA’s manifesto does not include any mention of women or LGBTQI+ persons or any commitments to promote gender equality or non-sexism. Enough said.

Although the manifesto mentions that the EFF held consultations with LGBTQI+ people to develop it, there are no explicit commitments focussed on LGBTQI+ people. The EFF manifesto, however, does include a focus on economic equality for women and ending GBV.

In economics, the EFF commits to supporting women in the land and agrarian economy by building a fresh produce market for small-scale food producers in every municipality with a minimum of 50% access by women and the youth. Given that an estimated 70% of South African households typically obtain their food from informal markets, this promotion of women-owned businesses could have many positive benefits for the women who trade there and the communities that access food from these markets. Strangely, however, the EFF’s broader commitments focussed on the economy do not mention gender or targets for women.

The EFF also commits to lobbying to increase the value of social grants and ensure that households that depend on social grants (the vast majority of which are female-headed) will qualify for free essential services. With over nine million women in South Africa receiving a social grant, this is an important commitment to improving women’s lives. Similarly, the commitment to establish early childhood development centres in every EFF municipality will be important for women seeking work. The absence of affordable childcare hinders women’s re-entry into the labour force since the first Covid lockdown.

The EFF manifesto includes a dedicated section on gender and women, with commitments to ensuring 50% representation of women in all spheres of the municipality; and establishing a special unit to monitor, report on and enforce gender parity and equality in all economic matters within municipalities.

The EFF plans to introduce a whistle-blowing mechanism for reporting workplace sexual harassment, including sex-for-jobs schemes and other GBV at the workplace. Sexual harassment is already defined as a form of unfair discrimination in the Employment Equity Act, and in 2020 the Department of Employment and Labour introduced a draft code of good practice on the prevention and elimination of violence and harassment in the world of work for public comment, which includes a whistle-blowing mechanism. It’s not clear how the EFF’s mechanism would interact with this.

The EFF commits to not hiring and not doing business with anyone found guilty of GBV or child abuse. It also commits to developing enforcement strategies to deal with GBV and drug abuse in each municipality and building shelters for victims of GBV and child abuse. Given that few cases of GBV ever result in a conviction or guilty verdict, this will only eliminate a small number of perpetrators from doing business with the EFF. However, it’s positive that the manifesto states that ‘No EFF councillor will abuse women or children’. Though one would hope this would be implied, it provides a good mechanism for removing accused councillors from positions of power pending investigation.

The EFF also commits to building shelters for victims of GBV and child abuse and distributing free sanitary towels – two issues that have garnered much public attention in recent years and where action is much needed.

FF+ – Gender equality initiatives may be antithetical to their agenda

The FF+ 2021 LGE manifesto did not include any mention of women or LGBTQI+ persons or commitments to promote gender equality or non-sexism. In fact, their manifesto proposes an end to affirmative action, suggesting that everyone should just be treated the same when it comes to jobs. This ignores the fact that the majority of the unemployed are black and female.

This article was first published in Daily Maverick Citizen Previous ArticleThe spectacle as substitute for real democracy
Next Article Are high school students equipped for the future?