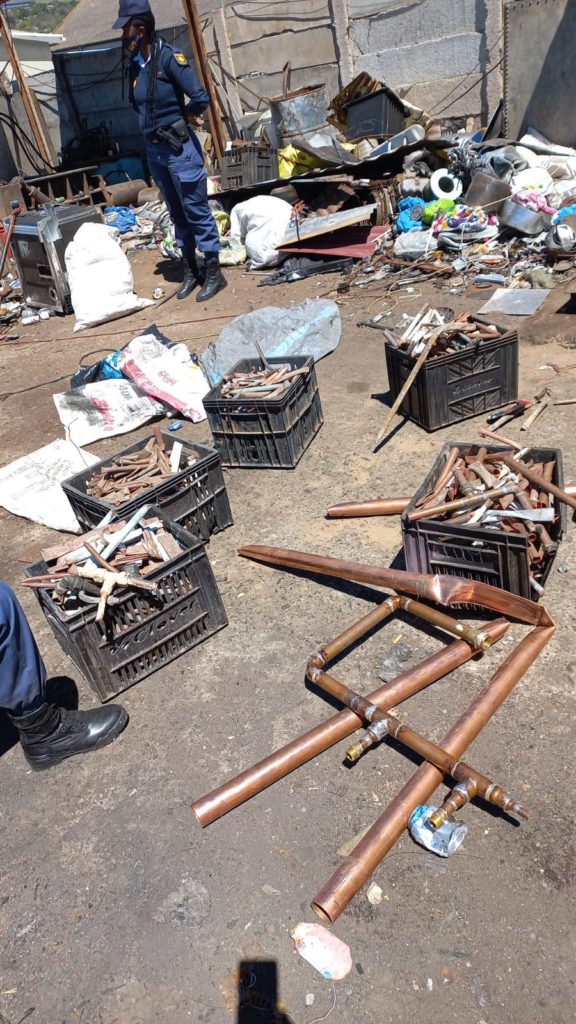 Some of the 600kg of contraband copper confiscated by police in a Victoria scrap shop on Tuesday 19 October. Photo: supplied

The SAPS arrested two men in possession of over 600 kilograms of copper worth R84 000 in Makhanda on Tuesday, 20 October.

According to SAPS spokesperson Sergeant Majola Nkohli, the arrests followed a morning raid of five local scrap metal dealers by police. Police found a stash of copper under piles of compressed aluminium bales in a dealership in Victoria Street.

The dealership has been shut down.

The confiscated copper is valued at around R 84 140. Among the seized items were pipes, taps, wiring and cables. The dealership owner and his assistant were arrested for contravening the Second-Hand Goods Act with a second charge of the contravention of the Criminal Matters Amendment Act.

The two men aged 46 and 26 will appear in the Makhanda magistrate’s court on Thursday, 21 October.

“People must heed that any person that is found guilty for contravening this Criminal Matters Amendment Act 18 of 2015 could be sentenced to imprisonment for a period of up to 30 years or issued a fine up to R100 million,” Lebok said.

“The purpose of the Act is to ensure that it addresses crimes affecting service delivery to the public, such as theft of cables, water meters, bridge railings, manhole covers, and including damages to infrastructure such as roads”, he added.