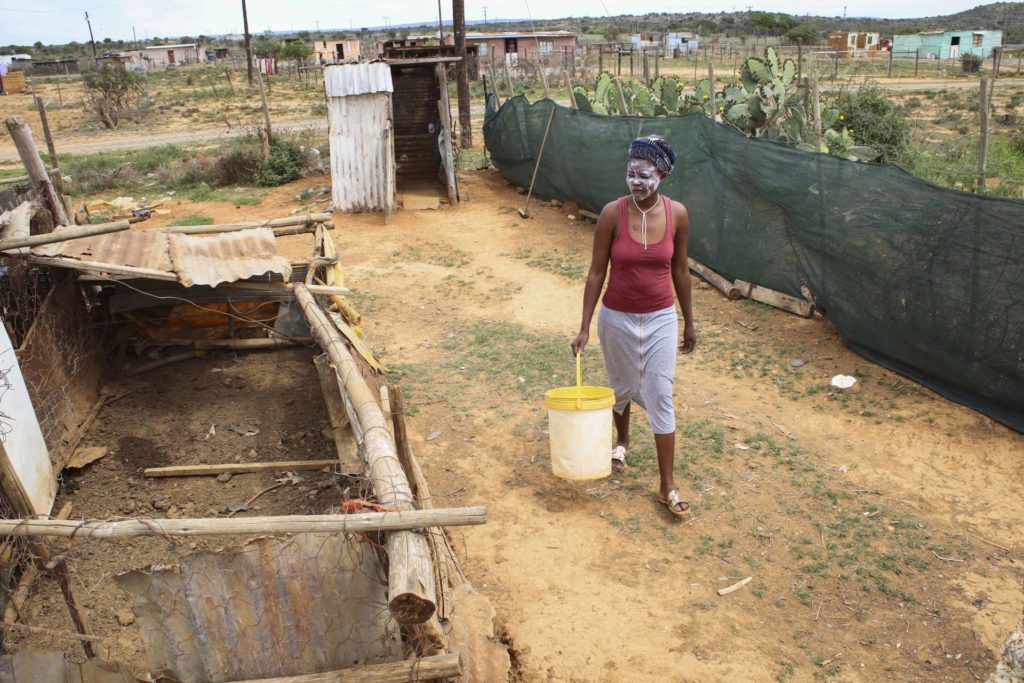 15 October 2021: Sisanda Siyazi,24, walks to get the water to clean a pit toilet which is located next to a gardern and pigsty. The family of seven share a pit toilet. When it gets full, they must find another space to dig a new hole.

Residents of small settlements in Makana and other parts of the Sarah Baartman District say they are not hopeful that their appalling conditions will change after next month’s elections. Still, many seem willing to cast their vote regardless. New Frame’s ANNA MAJAVU, BONILE BAM, and SIBONGILE PORTIA JONAS report.

Local government elections are a painful reminder of how much the government has ignored residents who have spent decades in small and often isolated shack settlements without houses, water, electricity, toilets, roads and rubbish removal services. But despite not resolving these issues for decades now, politicians are crisscrossing the country, promising to do so finally.

In the Eastern Cape, some of these settlements do not even have a single tap. Take Fort Brown, a settlement of 60 shacks situated next to the luxurious Kwandwe Private Game Reserve, about 30km from Makhanda. It was established 21 years ago but had no toilets or taps, forcing the 150 residents to share the water from three tanks filled by the Makana Municipality.

Fekethayo Siyazi, 76, and her husband Fezile Siyazi, 81, were born on nearby commercial farms. They got married in the mid-1960s while working on the farms and later moved to Fort Brown. The Siyazis say they struggled to survive for almost their entire lives, and in their old age, nothing has changed.

“Different farm owners employed us for 40 years. Yet, the income was too little. When I started as a young man, I earned R3 per month. My wife earned R2.10 as a domestic worker. Part of my duties was to drive a tractor, cut grass, work as a security guard, and I also looked after cattle. Under apartheid, life was very hard. We were exploited,” said Fezile.

After a lifetime as poorly paid farm workers, the couple has no resources to fall back on and would welcome a caring local government providing them with basic services. But this has not happened where they live, which is why they are reluctant to vote in the elections on 1 November.

“We have been voting for that old organisation [the ANC]since the first elections in 1994, when Mandela was president. We see another blue one [the DA]lately with white people distributing papers [pamphlets], and they ask the residents to vote for them. It is difficult to trust any politician these days. They don’t keep their promises,” said Fezile.

Another Fort Brown resident, Nosipiwo Fitoli, 37, lives with her partner and child in a two-room shack. She has been unemployed for over a year but says she will vote ANC because she had a six-month job through the expanded public works programme before the Covid-19 pandemic started.

“Our councillors always tell us if we vote for the ruling party, they will come and install electricity, water and toilets and fix the roads. All we need is to vote for them,” said Fitoli.

Neglect everywhere
About 84km from Fort Brown lies New Rest, a shack settlement established 24 years ago in the seaside tourist town of Port Alfred in the Ndlambe municipality. It is home to about 350 families, with those who cannot afford corrugated iron sheets to build shacks living in houses made of branches, twigs and mud.

The settlement has no electricity, and many of the makeshift roads are unfit for driving. Only five water tanks hold 25 000 litres that residents say the municipality fills up once a week. A pile of refuse near the one tank is regularly burnt as no waste removal occurs in New Rest.

Several residents here have vowed to vote for the EFF after losing hope in the ANC. The Ngesi family of 10, who live in a one-room house built from mud and pieces of corrugated iron, are among them.

“We are going to give the EFF a chance and see what they can do for us. We are not in a very joyful situation here because the ANC has promised us houses for 24 years, but the years have passed, and nothing is forthcoming,” said family member Mandisa Pikoli, 43.

The residents struggle for water, she says. “Sometimes, we pass a week without the water truck coming. There used to be a leaking pipe, and we took water there, but the municipality decided to close it because it was not purified water.”

Pikoli is aggrieved that no one from the ruling party has even bothered to give an undertaking to improve their lives during this election campaigning period. Instead, the ANC-ruled municipality planted poles in the ground and told the family they would be relocated to a piece of land further from the town centre to make way for a new road. She says the new site is unsuitable for shacks, as it is notorious for flooding during the rainy season.

“The ANC previously promised us electricity, but now they say we must move because we were only temporary here in New Rest. We find it strange that they told us we are temporary even though we have been here for 24 years. These people have been lying and making empty promises, and we don’t see any of the council budget being spent here,” Pikoli added.

Ntombovuyo Ngesi, 26, says the family built a mud house to replace their shack, which burnt down. “The ANC promised to help us rebuild, but they never did, so we built it again with mud. Now we are giving the EFF a chance to see what they will do for us.”

EFF councillor candidate Charlton Wayiza, 43, moved to New Rest at the age of 19, when the settlement was first established. “I have not seen a single change here over the years. Nothing. We rarely see the current councillor. Like most residents, I am not working, and I also don’t have water,” Wayiza said.

Voting with an agenda
In Zweledinga, a small shack settlement of about 400 families 25km from the city centre of Gqeberha, some residents say they will vote for the ANC – but only because they want to remove the DA, which currently heads a coalition government in the city.

Zweledinga falls in the same ward as the upmarket suburb of Seaview, but its residents say they’ve been overlooked for the past 50 years. They have to share a few taps and only got electricity in 2020. “Our refuse is not being collected, and there is a large dumpster placed near our homes,” said resident Mandla Wine.

Resident Msindisi Barends led a protest last year after the municipality disconnected an electricity connection the Zweledinga residents had made to a nearby substation.

“I was born here 39 years ago, and I still live in this shack. There are still kids being born here too. I expect the government to build us houses after these elections because people have struggled here,” said Barends, who plans to vote for the ANC.

Phakama Sahlukho, who has lived in Zweledinga for over 15 years, says ambulances take a long time to arrive when called, even though the settlement is on the main road to Seaview, where emergency services react quickly. As a result, pregnant women have to hire private vehicles to get to a hospital when they are due to give birth. She says that some unemployed women have been unable to afford the trip to the hospital and have lost their babies.

“It’s hard here. We need to take two taxis to go to the nearest clinic. When we call an ambulance, it will arrive five hours later. Imagine a pregnant woman whose water has broken waiting that long for an ambulance,” Sahlukho said.

She hopes that the local government elections will change their fortunes, even though the residents have lost faith in political parties. “We are voting because we have no other option,” she said, declining to reveal the party of her choice.

This article was first published by New Frame