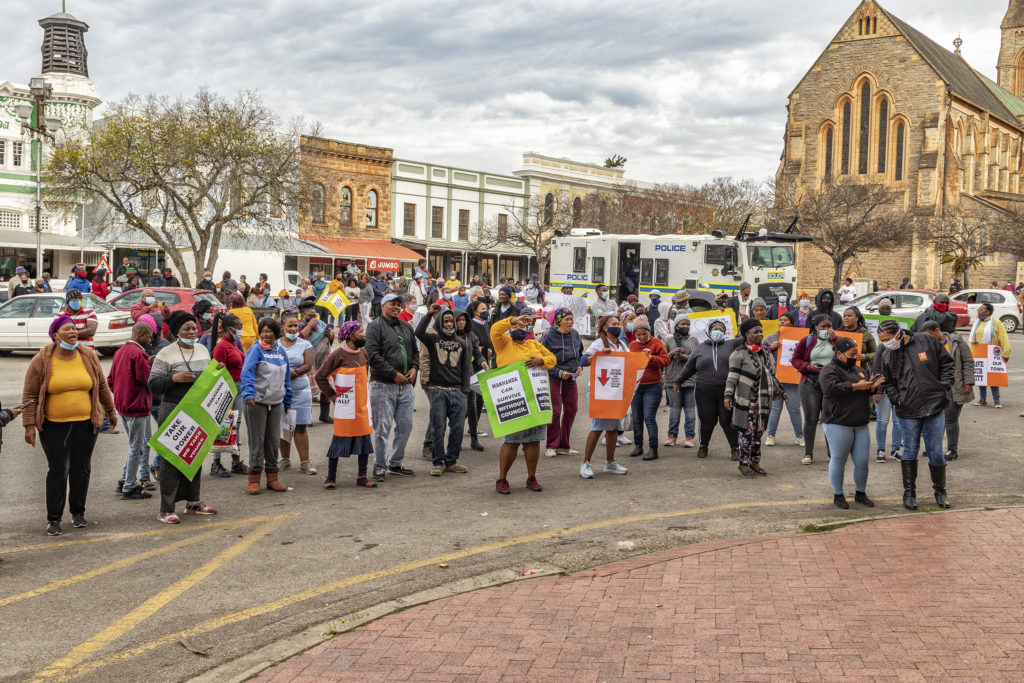 Protesters gather outside the City Hall in Makhanda ahead of a meeting of provincial government representatives led by Co-operative Governance MEC Xolile Nqatha. Photo: Simon Pamphilon

The Makana Municipality has scored a failing 43% in News24’s Out of Order index.

The index allocates each of the 215 local municipalities and eight Metros a score on a scale from 0-100, where 0 is a ‘failure’, and 100 is ‘perfectly performing’.

The average index score is 45% for all municipalities, indicating the national crisis in local government.

Makana is one of 41 municipalities in the 41%-45% range and is listed as a ‘dysfunctional municipality’. A further 88 municipalities were rated worse than Makana (scoring between 26% and 40%). And a further 94 achieved scores of 46% and higher.

The index, compiled over two months, draws from sources such as National Treasury’s budget data used to calculate budget allocations to municipalities, the Auditor-General’s reports, and Statistics South Africa. It also measures unemployment, poverty and essential service delivery to households.

Out of Makana’s operating budget of R471.5-million, R78.7-million is flagged as “money not spent properly”.

A key indicator for citizens is how the municipality maintains local infrastructure. This is typically measured as a percentage of the capital budget which is spent on repairs and maintenance. Ideally, R8 in every R100 spent on a capital project, or 8%, should maintain what has been built.

Tellingly, in the Out of Order data, only four municipalities are spending at that level in the 2018/19 financial year data that is available. Some 88 municipalities spent between 1% and 8% on repairs and maintenance, while 112 spent nothing or did not provide data. The percentage of the Makana budget spent on maintenance is listed as 0%.

The percentage of Makana’s operating budget spent on staff wages is listed as 30%.

Our Municipality has been under administration for a year. In the 2019/20 Auditor-General’s report, Makana is described as being in a dire financial position because it didn’t have enough revenue to cover its expenditure. It also has a history of disclaimed audits.

Citizens of Makana have gone to court to request that the council be dissolved due to poor service delivery and a lack of infrastructure maintenance. Makana is included on the Department of Cooperative Governance and Traditional Affairs’ 2021 list of dysfunctional municipalities and receives an intervention package.

The local government election results in 2016: