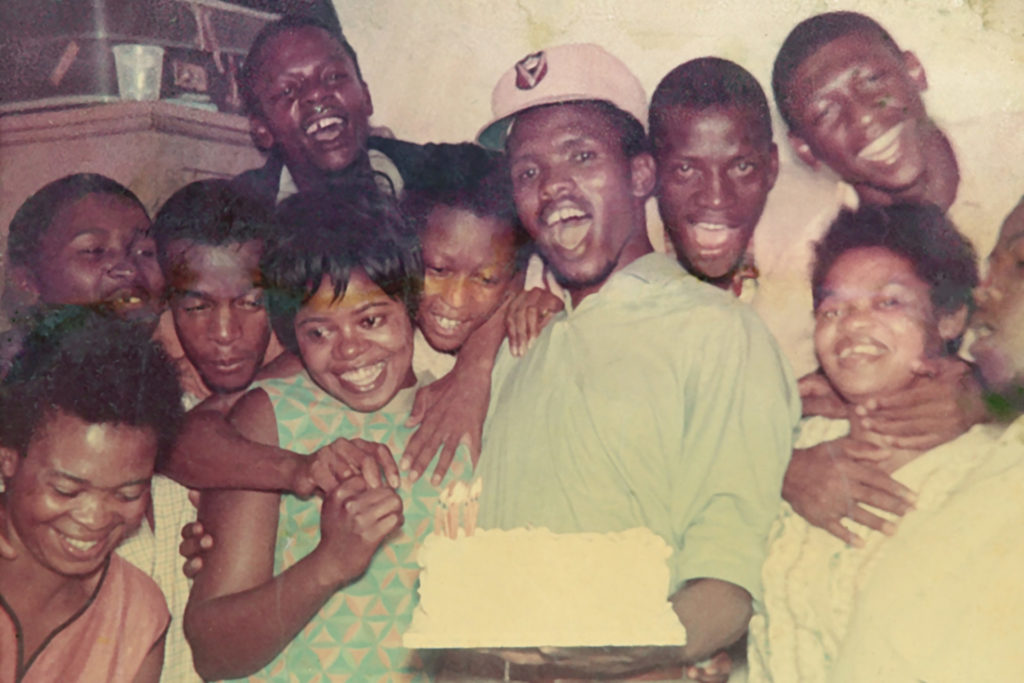 5 April 1969: Flanked by friends and with a cake in hand, Steve Biko poses for the camera at a birthday party held at the University of Natal Medical School Non-European Section in Durban. (Photograph courtesy of Lindiwe Edith Gumede Baloyi)

The Black Consciousness Movement was committed to praxis; theory and action. Steve Biko and his comrades devised programmes that justified their ideas and improved people’s lives.  A special Heritage Month report by TRICONTINENTAL (an Institute for Social Research).

When in the central Durban neighbourhood of Greyville, you might notice a building bearing the signage: 86 Charlotte Maxeke Street, Ultra Kidney Care Renal Dialysis Unit. There is no indication that this modern structure stands today on a site of immense historical and political importance. Here once stood the building that housed the national office of the South African Students’ Organisation (Saso), founded in December 1968; the Natal Youth Organisation (NYO), founded in 1972. And the founding office of the Black Community Programmes (BCP), created the same year.

In 1976 Steve Biko was called by the defence to give testimony about the Black Consciousness Movement during the SASO/Black People’s Convention trial (the defendants were charged with organising the Viva Frelimo rally at Curries Fountain Stadium in Durban on 25 September 1974). Biko said the approach of the BCP was three-pronged. “First, we engage in the form of direct community development projects which are in the form of clinics, churches and so on. And then we engage in what we call home industries – these are economic projects, in rural areas mainly, sometimes in urban areas as well … And the main purpose here is to give employment to people, and offer some technical training in that particular skill … And thirdly we do leadership-training courses.”

The community building and political organising at 86 Charlotte Maxeke continued a tradition that had long existed on this thoroughfare, formerly known as Beatrice Street. In the early 20th century, the building had been a McCord Hospital Dispensary, a pioneering health centre for Black people. Down the street at number 29 is the Beatrice Street Young Men’s Christian Association (YMCA), once the Bantu Social Centre, an institution with its rich history. Number 90 is still the home of the United Congregational Church of Southern Africa, known as Ezihlabathini (meaning “in the sands”), which has served as a meeting space for Black people since 1891.

The BCP, initiated in 1972, consisted of a series of projects that served as the practical implementation of the Black Consciousness philosophy to give Black people the power to become self-reliant. In practice, these programmes included publications and research, health centres, factories to employ the economically marginalised, and a trust fund to provide necessities for former prisoners and grants for yet other projects.

The age of resistance
The birth of the Black Consciousness Movement in South Africa played out against the backdrop of the Pass Resistance Campaign, the Sharpeville Massacre, the banning of the South African Communist Party (SACP), the Pan Africanist Congress (PAC) and the African National Congress (ANC), the formation of the latter’s armed wing, Umkhonto weSizwe (“the Spear of the Nation”), and the PAC’s armed wing, Poqo (the abridged name for Ama-Afrika Poqo in isiXhosa, meaning “the real owners of Africa” in English). The end of the Rivonia Trial in June 1964 heralded a hiatus in resistance politics. The subsequent establishment of Saso in 1968, followed by the creation of the BCP in 1972, can be seen as a response to this political doldrums.

From 1963 to 1964, many Black students joined the multiracial National Union of South African Students (Nusas), founded in 1924. Members of Nusas, mainly from white English-speaking universities, fought against apartheid. But Nusas operated in a deeply segregated educational system. In 1967, Steve Biko, a medical student at the University of Natal Non-European section in Wentworth, attended the Nusas conference at Rhodes University in Grahamstown (now Makhanda) that July on behalf of the Wentworth campus. The following year, in 1968, he attended a conference of the multiracial University Christian Movement (UCM) in Stutterheim in the Eastern Cape. At the UCM conference, Biko began drumming up support for the idea of an all-Black students’ movement, which would do away with the difficulties of symbolic integration and white liberal leadership. Many Black students within UCM reacted positively to Biko’s suggestions.

Biko organised a meeting of Black student leaders to discuss the launching of a new movement exclusively for Black people in December 1968 at his alma mater, St Francis College, a Catholic mission school in Mariannhill, outside Durban, where it was agreed that it would be named the South African Students’ Organisation. In July 1969, the inaugural conference took place at the University of the North (also known as “Turfloop” and currently the University of Limpopo). Biko was elected Saso’s first president.

Saso advocated the ideology of Black Consciousness, the ending of Black peoples’ both real and perceived dependence on white people. In Biko’s words, “blacks are tired of standing at the touchlines to witness a game that they should be playing. They want to do things for themselves and all by themselves.” Some saw Black Consciousness as “reverse racism”. In response, Biko wrote: “We are looking forward to a non-racial, just and egalitarian society in which colour, creed and race shall form no point of reference.”

Fostering a people’s pride and confidence
The BCP was founded in 1972 to address and embrace community welfare, culture, Black theology, education, literacy, Black art, self-help, and other empowering projects. In its 1973 report, it was stated the BCP was created “to enable the Black community to organise itself, analyse its own needs and problems, and mobilise its resources to meet its needs. To develop Black leadership capable of guiding the development of the Black community”.

According to Mamphela Ramphele, the development goals of the Black Consciousness Movement through the BCP “were articulated as the practical manifestation of Black Consciousness philosophy, which not only called for critical awareness of social relations amongst the oppressed but for the need to translate that awareness into active programmes for liberation from white domination”.

Christian institutions also played a fundamental role in the formation of BCP. Xolela Mangcu notes in Biko: A Biography that “Black Community Programmes were an off-shoot of Beyers Naudé’s Christian Institute”. SPRO-CAS 2 (the Study Project on Christianity in Apartheid Society – Phase 2), from which the Black Community Programmes developed into an independent organisation, was initially sponsored by the South African Council of Churches and the Christian Institute of Southern Africa.

Operating from four offices across South Africa, the BCP clearly expressed concern for the desperate conditions of urban and rural Black communities and implemented programmes in response to their challenges. Along with the head office at 86 Beatrice Street in Durban, there were regional branch offices at 15 Leopold Street in King William’s Town (also known as eQonce), Eastern Cape, and 80 Jorissen Street in Braamfontein, Johannesburg. After the programme’s executive director Bennie Khoapa was banned in October 1973. His movement was restricted to Umlazi, a Durban township; the Natal Regional Office was opened in the same area. Christian networks were critical in providing office space in a context in which more overtly political organisations were banned.

The BCP consisted of a broad range of projects, including research and publications, health centres, a factory and a trust fund. All of them seeking to create the conditions for Black people to be self-reliant, politically conscious, and the drivers of their development and liberation.

Black Consciousness activists were determined to transform research by and about Black South Africans and ensure the publication of their work. To this end, Biko initiated Black Review, an annual journal that sought to address the need for an alternative approach in South Africa by surveying significant events in the country. With the assistance of volunteers Tomeka Mafole and Welile Nhlapo, Biko carried out research using newspaper reports, annual reports from organisations working within the Black community, the Government Gazette and interviews with community workers and leaders across South Africa. The first edition of Black Review came out in the early months of 1973. Bennie Khoapa was credited as the editor in this edition because Biko’s banning order in March 1973 prohibited him from participating in publications.

Another essential BCP publication, Black Viewpoint, saw Black people writing on current and relevant issues. It was launched in 1972 with issues edited by Biko and Khoapa. Black Perspective, catering for Black academics and professionals [and]published in 1973, was discontinued after only one issue following police seizure of all its source materials. June 1973 saw the publication of the Handbook of Black Organisations, a directory of voluntary organisations.

A focus on health and livelihoods
The Zanempilo Community Health Centre was established in January 1975 in Zinyoka, a village in rural Ciskei within the restricted area delineated by Biko’s banning order, 10km outside of King William’s Town (eQonce) in the Eastern Cape. Zanempilo means “the one bringing health”. Its first medical officer was Mamphela Ramphele; as the workload increased, two more doctors, Siyolo Solombela and Sydney Moletsane, joined the team. Ramphele remembers in Bounds of Possibility (1991) that “Zanempilo quickly became a meeting place for all activists in the area. It also served as a guest house for visitors from far and wide who came to see the project or to consult with Steve Biko (who was under banning orders) over a range of issues.”

A second health centre named Solempilo (meaning “eye of health”) was built near Adams Mission in Durban. However, before it could become operational, it was closed when all Black Consciousness organisations were banned on 19 October 1977, a day still remembered as “Black Wednesday”. After the banning, Zanempilo Health Centre was taken over by the “homeland” government of Ciskei. After the end of apartheid rule in 1994, Zanempilo was taken over by the new government of South Africa and is still functioning today.

In a bid to address the economic marginalisation of Black people during apartheid, the BCP opened the Njwaxa Leatherwork Factory in 1974 to give the Black people who worked there a measure of economic independence. The factory was opened in the rural village of the same name situated about 48km from King William’s Town on the road to Alice (eDikeni). The factory operated for four years, manufacturing belts, handbags, saddles, cushions, shoes, sandals, fishing-rod holders, purses and tobacco pouches. This factory, too, was closed when the apartheid regime shut down all Black Consciousness organisations in October 1977.

The BCP launched the Zimele Trust Fund to support former political prisoners, supplying them with clothing, essential furniture and food. [They also offered] study bursaries for their children. To encourage and enable the creation of income-generating self-help projects, the Zimele Trust Fund also made grants available to them. (Zimele means “stand on your own feet”.) Mapetla Mohapi, the administrator of the Zimele Trust Fund, was killed while in police custody on 5 August 1976.

The Black Community Programmes succeeded in advancing a legacy of community development for political transformation that inspires activists today. The ideas developed and taken up in these five years of ferment (from 1972 till the banning in October 1977) have also sustained influence in contemporary South Africa. They remain present in current forms of popular organisation and struggle. A high price was paid for this period of political creativity. Activists were detained, sentenced to imprisonment, and received individual banning orders, and a number of them were killed. Their role in the history of South Africa should be studied, recorded and remembered.