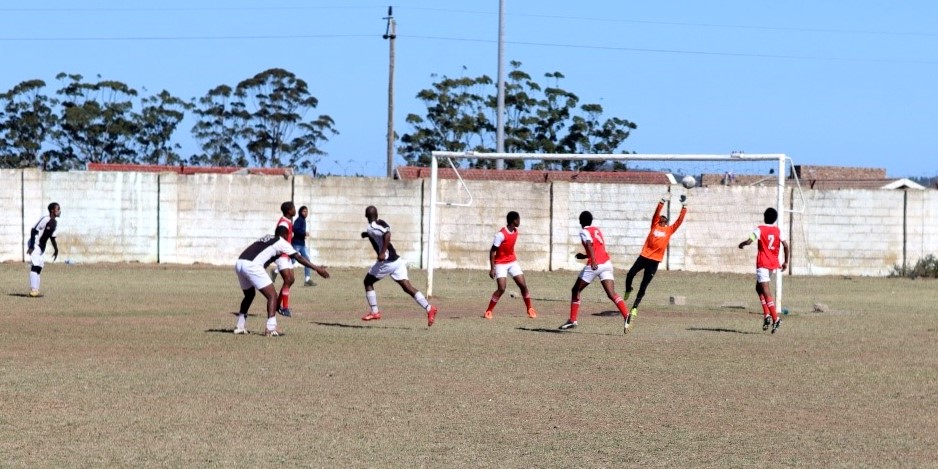 Amos Ndubela watching his goal fly past the goalkeeper before being mobbed by his teammates in celebration. Photo: Matthew Petersen

With the Makana LFA Premier League having crowned Jacaranda Aces as the champions for the 2021 season, our focus shifts to the First Division. Plenty of teams are fighting for promotion to the Premier League for next season, and some are fighting to avoid finishing bottom of the pile. With a host of games taking place at Fiddler’s Green, Extension 7 and the JD Dlepu Stadium, the football season continues and heads towards an exciting climax!

Match Report: Pumba Pirates vs African Spears
Spears kicked the game off, but Pirates quickly established themselves as the dominant side and managed to score within 5 minutes of the start through Athenkosi Ngqina. Both sides struggled to maintain a consistent string of possession as the game progressed, although Pirates were still the dominant team. Pirates had another chance to go two goals up as the half continued, but the Spears goalkeeper denied them.

Spears started to fathom more chances of their own and had two brilliant opportunities to equalise. The Pirates goalkeeper denied the first, and then Spears failed to capitalise on a glorious chance when the Pirates keeper was left stranded outside his box after chasing a long ball over the top.

Both sides had chances before the half-time whistle, with Pirates 1-0 up at the break.

The second half started in the same way as the first, with Pirates controlling the ball and Spears struggling to get out of their half. Pirates continued to launch an onslaught of attacks on the Spears defence, who just about managed to handle the pressure. Still, nothing yielded a second goal.

A moment of individual brilliance from Amos Ndubela made the difference as he weaved his way past three defenders to slot the ball past the goalkeeper for his first and Pirates’ second of the game.

Pirates then hit the crossbar and missed an open goal chance in the final 15 minutes before Ndubela ran in on goal and neatly finished past the Spears keeper for his second and the games’ final goal. Pirates’ dominance was ratified since Spears did not manage a shot on goal in the second half. The game finished 3-0 as Pirates continued to fight for promotion to next season’s Premier League.