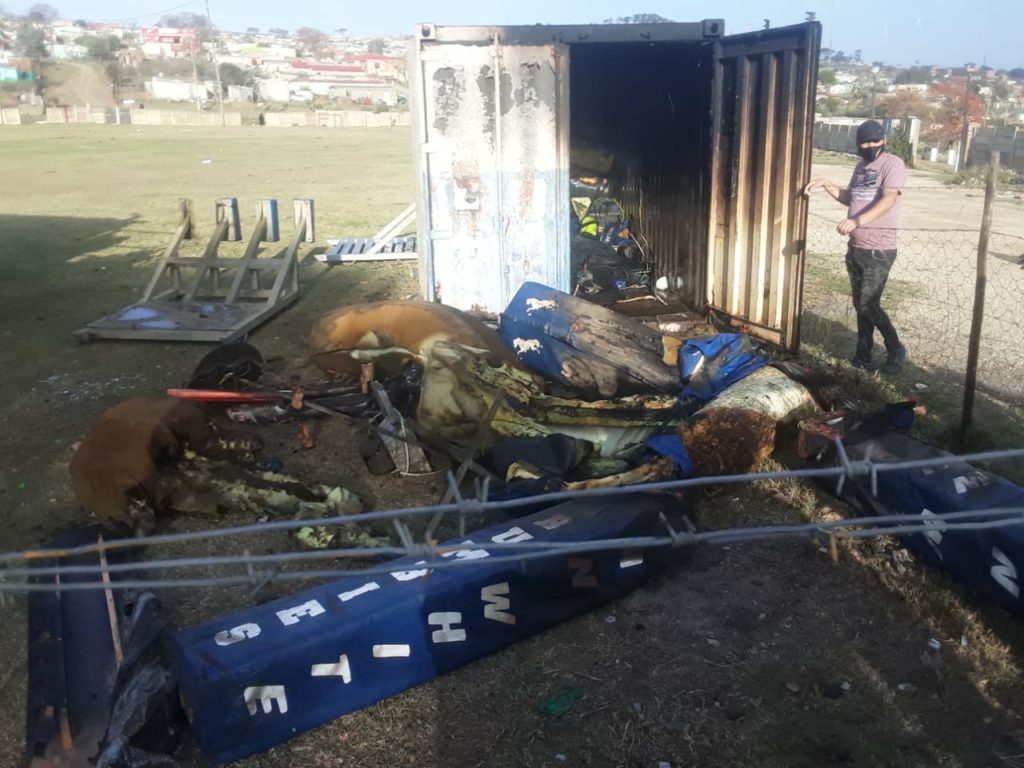 An estimated R100 000 of equipment belonging to the Brumbies Rugby Club was destroyed in a suspected arson attack at The Oval on Sunday. Photo: Chesley Daniels

A case of arson has been opened against seven boys, aged 10 to 15 years old, after R100 000 of equipment belonging to the Brumbies Rugby Club was damaged in a fire at The Oval ground on Sunday 19 September.

Firefighters were called to the scene by community members, but the fire had already caused extensive damage to a container of precious Brumbies equipment. Brumbies public relations officer Chesley Daniels and club President Tyrone Goliath rushed to the scene after being alerted about the fire at around 4 pm.

Daniels said that when he and Goliath arrived at the scene, “it was all smoke and fire, with a lot of people standing around and watching in dismay”.

“The two firefighters were busy trying to get the fire under control and save what was left. Unfortunately, the entire container was damaged, and our rugby equipment was beyond repair.”

The container was set alight through its small holes, and no casualties were reported.

Although the Hitec Security officer on duty at the clubhouse was unable to spot the perpetrators of the fire, a group of boys were seen leaving the field soon after the fire started and were reported to have behaved suspiciously by witnesses.

CCTV footage in the area showed several boys setting the container alight, but the visuals were blurred and further questioning of witnesses was required to identify them.

When asked if there was any possible motive for the arson, Daniels said The Oval was prone to theft and destruction.

He said young boys often roam around on the field, sometimes using hookah pipes to smoke dagga. “This is not the first time people have caused damage to Brumbies property. They recently stole our sponsored three pallets of bricks we got from Makana Brick and also broke into our container and stole our gym equipment.”

The Brumbies Rugby Club, an Eastern Province Rugby Union (EPRU) affiliate, was established in January 2000. It fielded three teams in the EPRU Super League Competition before the Covid-19 National State of Disaster regulations.

The club initiated a restoration project at the Oval in 2020 to close the perimeter fence around the field and fill in holes in the club building with bricks to block entry from unauthorised people and animals. The fence and building were, however, quickly vandalised and destroyed soon after.

Chesley said that the club could not replace the uninsured equipment and was seeking assistance from sponsors or donors.

If you would like to lend a hand to the Brumbies Rugby Club, email ghtbrumbiesrc@gmail.com or call 0619438498.