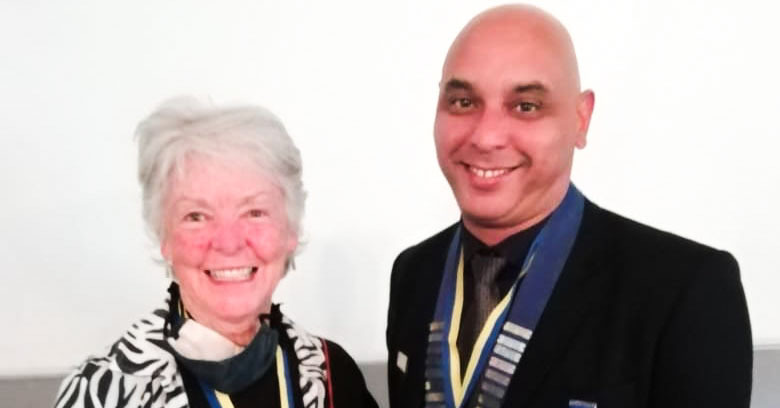 Outgoing President Javier Martin presented Makhanda resident Helen Holleman with a Paul Harris award at the Rotary Club of Grahamstown Sunset’s Induction and Charter function on 26 June. The award was in recognition of her work cleaning up local rivers. The following is an extract from the award citation.

Early last year, she began by showing up with a helper or two to clean up the little rivers and ‘driffies’ in Jarvis Street, Evans Street and other areas where there are springs. Often you would not even identify these areas as springs or rivers, as they haven’t run in so long – clogged up with plastic, and even things like old mattresses and sofas.

Soon, Helen was joined by local children and some of the locals who lived close by. They would collect dozens of black bags of garbage which they pulled from the stinky mud, until the little rivers could once again flow.

But then it would rain (when it still rained!) and tons of garbage would come flooding down the rivers again.

And Helen just went right back and picked it all up again!

With her little band of helpers, for whom she had to buy gloves and gumboots, she just kept on picking up the rubbish in the rivers, over and over and over again.  Sometimes the municipality has assisted with a front-end loader to move mountains of garbage. Most weekends, Helen needs to rent a skip which they fill up with all the garbage.

Some of the children who help her have never seen the rivers running – rivers that in past were used for drinking water, washing, swimming.  And now, many of them are silted up with rubbish.

I have followed Helen’s journey on her Facebook posts, wept when I saw the work that had been done cancelled out by more mountains of rubbish.

Now Helen has started River Rescue which, as a non-profit, she hopes can benefit from assistance with the costs of cleaning up the rivers – small in the scheme of things, renting skips, garbage bags, gloves, gumboots and so on.

Helen has also used the clean ups as pop-up schools, getting people to teach the children who show up to help her about the importance of the rivers, the wildlife they find in the water, (heaven help them if they kill and crab or a worm – these all mean healthy rivers!). Talking to her about how the children react to this all is so inspiring.

I hope that we can help her in her quest – I will certainly be looking for ways that our club can get involved.  As Helen says, “Rivers are the lifeblood of the planet, and a sustainable planet is the ONLY valuable thing we can leave our children. Rivers need our love and care, so that they can care for us.”

Helen – you are an inspiration!  Strength to your arm.