The week the Antarctic came to Makhanda 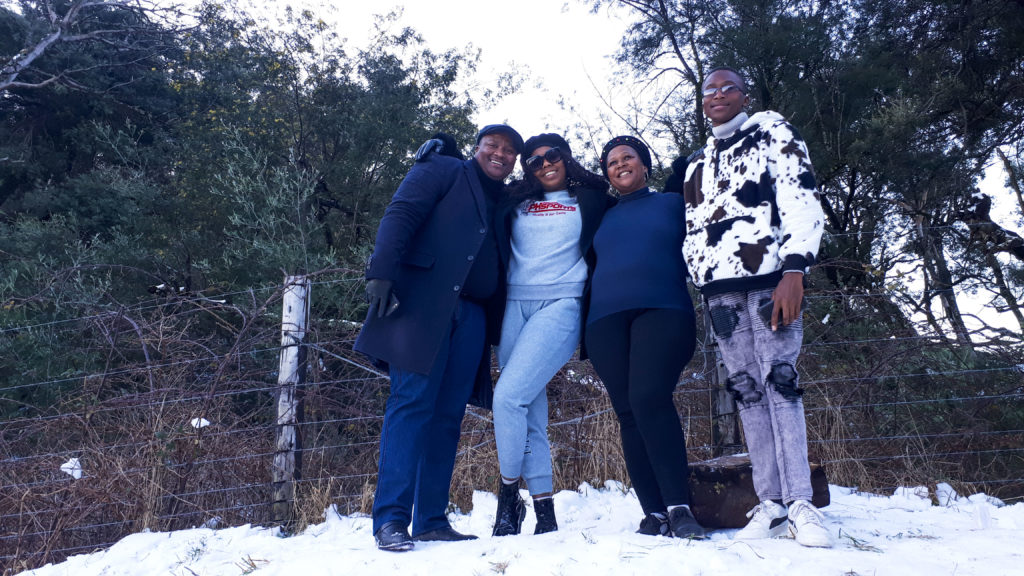 Rhodes University alumna Thembakazi Mtambeka (second from left) and friend Lwandiso Mbelebele, from Queenstown, with Noluthando Mtombeni and Mihlali Mtombeni pose for a photo at the top of Nico Malan Pass on 24 July 2021. The Mtombeni family drove all the way from Lady Frere to see the snow. Much of it had melted, but two days earlier, heavy snow saw the pass closed to traffic. Photo: Sue Maclennan

Why was it so cold last week? Ian Meiklejohn explains.

Much of South Africa experienced record or near-record low temperatures between 20 and 25 July 2021. Why was this the case?

To understand it fully, we need to examine the normal weather systems in southern Africa. The most direct sun’s rays strike the earth near the equator. The actual position moves north or south, depending on the season. The air near the equator is warmer than that at higher latitudes; it rises and moves towards the poles. When this air cools, it begins to sink at about 30° latitude.

That is where we are located (we are actually at 33½°S. This circulation is called a Hadley Cell. The sinking air prevents convective uplift, and hence rain forming. The result is that we are in a naturally dry environment. Look at the same latitude in the north of Africa, and you will be in the Sahara Desert.

In summer, the whole system moves to the south, following the sun. Also, the land then heats up more than the surrounding ocean, producing a low pressure, which breaks the stranglehold of the High, drawing tropical moisture to the summer rainfall areas. In winter, the high-pressure moves north, and with less heating over the land, it dominates our weather, causing fine and clear conditions. Cold fronts, which develop at the Antarctic Convergence move north-westward, can bring rain in winter. Mostly, they are blocked by the High, and they only really affect the southern parts of the country. From 20 to 25 July 2021, a series of cold fronts that were very close to each other approached the country. At the same time, a powerful high-pressure system located unusually far to the south moved behind the fronts forcing them northward and drew with it freezing Antarctic air, which blew into the interior of southern Africa.

Were the events of 20 to 25 July a manifestation of Climate Change?

The answer to this question is complex. There is evidence that climatic warming may be increasing the strength of the Hadley Cell and have caused it to strengthen further south than usual. Evidence that the cold spell is negative feedback from a warming climate is inconclusive. The same strengthening of the Hadley Cell is also argued to be responsible for large parts of the country that receive a significant portion of their rain in winter (Makhanda included) getting drier. We can say that natural and anthropogenic impacts on the global climate and their impact are complex and may have surprising feedbacks.