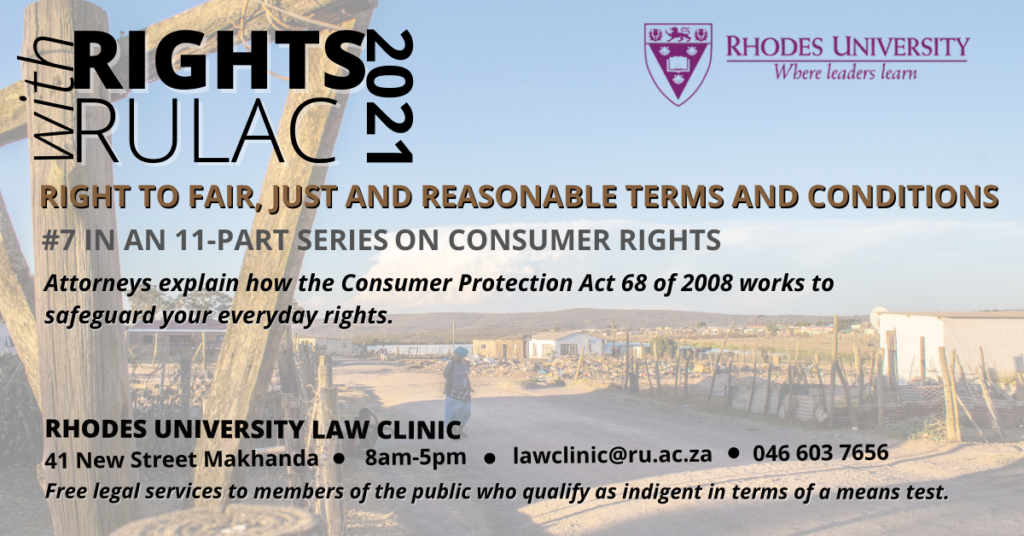 MBULELO DAUSE explains the right to fair, just and reasonable terms and conditions as set out in the Consumer Act, sections 48-52.

Zoleka enters into a lay-by agreement with a furniture shop for the purchase of a four-piece couch, valued at R5 000, payable over a period of six months. After concluding the agreement, Zoleka receives a receipt from the shop. On the back is written “no cancellations, no cash refunds, no returns and no exchange”. Zoleka is also required to surrender her identity card to the shop to motivate her to pay.

After being hospitalised due to a car accident, Zoleka is retrenched and is unable to pay the outstanding balance of the lay-by agreement. She would like to cancel the contract and get her money and identity card back, but the shop tells her the contract terms deny her this opportunity.

Are the contract terms fair, just and reasonable? The Consumer Protection Act deals with such questions in Part G (sections 48 to 52).

But what does “unfair, unreasonable and unjust” mean?

Under Section 48(2) a term will be unfair, unreasonable and unjust if it is:

Section 51 of the Act sets out the so-called “blacklist” of prohibited terms in consumer agreements. The list is lengthy, but some examples include that no contract may be subject to a term that:

In the regulations to the Act (regulation 44(3)), the legislation goes on to identify a list of specific types of terms that are presumed to be unfair, unless the supplier can show very good reason for their enforcement. This is known as the “grey list”. Once again, the list is extensive, but a term will be presumed to be unfair and unreasonable if it has the effect or purpose of:

Zoleka could not challenge the price she agreed to pay for a large couch, which is reasonable. However, under section 51, it was unlawful for the shop to take and hold her identity card. Additionally, she was not given notice of the one-sided terms hidden at the back of her receipt, and which were never pointed out to her. In particular, the Act in section 62 (on lay-by transactions) gives her a right to cancel a lay-by contract, and if the cancellation occurs due to hospitalisation, then the shop cannot impose a cancellation penalty. These rights cannot be excluded in a contractual term.

Know your rights as a consumer

This 11-part 2021 series is written by attorneys at the Rhodes Law Clinic. The articles cover various aspects of consumer rights in terms of the Consumer Protection Act 68 of 2008. Here are the articles published to date:

#1 As a consumer, do you have rights?

#3 The right to choose

#4 The right to disclosure and information

#5 The right to fair and responsible marketing

#6 The right to fair and honest dealing

#7 The right to fair, just and reasonable terms and conditions