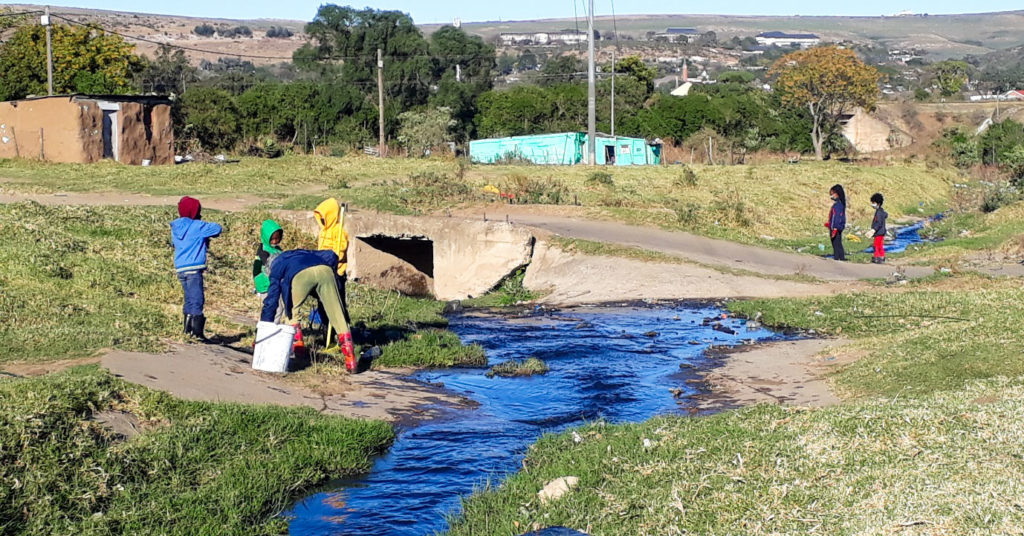 Elizabeth Davies was born in Evans Street and has lived there all her life. In the late 80s, when she was a child, they used to swim in the river. But around 20 years ago, it started to get too dirty to even wade in.

Elizabeth was heartbroken at the progressive degradation of the river and its surrounds.

At the beginning of 2020, Helen Holleman started cleaning up the river at the Jarvis Street bridge, and so River Rescue started, born of a dream to make the rivers safe places for children to play.

“In about February 2020, Helen came and asked me, what do I think of the rivers. I explained to her what it was like before and what it is now. I told her I was heartbroken to see what happened here,” Davies said.

She asked Helen if she could help. The answer was yes.

“First we started to clean up there in Jarvis Street,” Elizabeth said. “From Jarvis Street we came up here. It’s for one and a half years that we have been working here in the rivers.”

It was earlier this year when Elizabeth thought, “We’re cleaning the rivers, but what about this field next to it?”

People were starting to dump rubbish there.

Undeterred, Elizabeth went to people living in the neighbourhood and asked them if they could help her clean up.

“The adults didn’t want to help, so I asked the children,” Elizabeth said.

Now, around 20 children come every second weekend to help her clean up the river and the field.

Then Elizabeth had another idea.

“A month ago, I asked Helen if I could have this as a park for the children – like a playground for them. She said to me, ‘Elizabeth, it all depends on you.’”

So Elizabeth got together a small team from the neighbourhood and started cleaning up. Without funding or sponsorship, there was one way: “Reduce, re-use and recycle!”

Easy Fit & Go readily handed over 100 tyres which Elizabeth plans to use to make a border all around the park.

Then she’s going to fill cooldrink bottles with sand and make little benches for the children to sit on.

“When I’ve done that, I’m going to try and get some poles, and make swings for the children out of those same tyres.”

But for Elizabeth, it’s not just about her own immediate neighbourhood, Evans Street and Planet. People looked at the park and asked, “How did it get like this? How can we make our place like this?”

“At Scott’s Farm there’s an open field as well. So I showed Helen and the [Honours] students [from the Department of Environmental Science], let’s go up there and try to do something there. So for a couple of weekends, we went and cleaned there.”

Again, it was the children, not the adults, who cheerfully came to help. However, the community at Scott’s Farm is still unclear about just how they want to develop the potentially wonderful asset on their doorstep, and without their guidance, work on that section has stopped for the moment.

To their dismay, when River Rescue returned to the Evans Street site, it was full of rubbish again.

“I said to Helen, ‘We must teach them. If a child sees another child throwing rubbish on the ground, they can tell them, “That’s not a bin. Pick it up and throw it in your bin, or keep a bag with you for your rubbish and put it in there.’”

After a clean-up session, there’s time for a ‘pop-up school’ session to learn about where water comes from, how it gets into our taps, what rubbish in the rivers does to our world.

“With the rivers, we teach the children that the cows and goats that drink that water – there is plastic that comes straight down from up there. If a cow eats that plastic it will kill that cow.

“It’s the same with our seas, because what’s in these ditches goes straight down to our seas. And there the fish and all the sea animals are also dying.”

The next bitter blow was a week after they had officially opened the park.

After some frantic phone calls, the sewage leak onto the corner of the playground was stopped, but Elizabeth and River Rescue will have to tackle the resultant mess to make it safe for the children again.