The right to fair and honest dealing 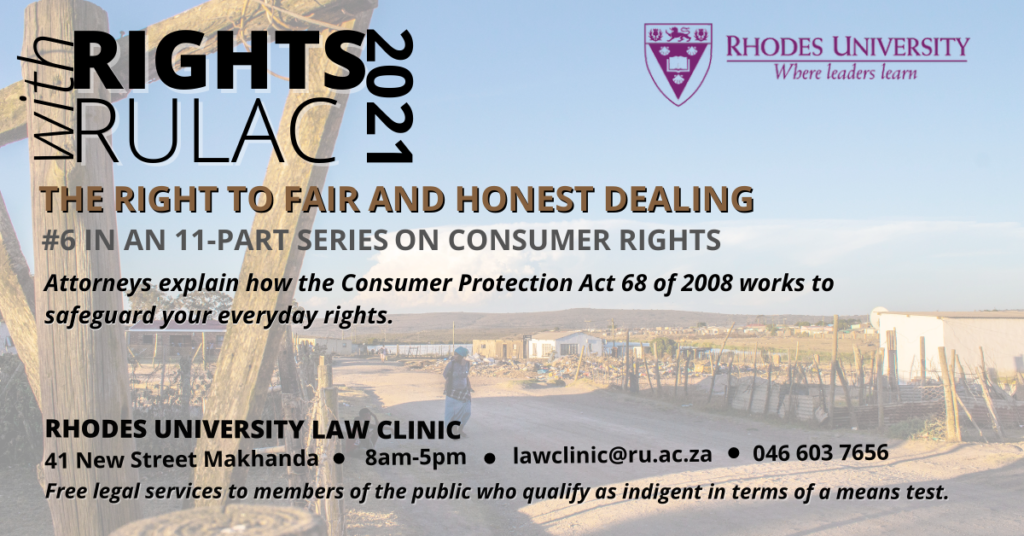 Have you ever felt harassed, or misled by a supplier, or perhaps been lured into a pyramid scheme? If you have, then this article is for you.

One of the important purposes of the Consumer Protection Act (CPA) is that it protects consumers from behaviour by suppliers during the precontractual negotiation process that is considered to be “unconscionable”.

The word “unconscionable” is defined specifically to include the use of physical force, coercion, undue influence, inappropriate pressure or harassment. As such, no supplier or agent may use any of these techniques when marketing or supplying goods, negotiating services, or demanding payments for goods and services.

It is also unlawful for a supplier to knowingly take advantage of a consumer who is mentally ill, disabled, cannot read or write, is ignorant, or cannot understand the language of an agreement.

A significant section of the CPA (section 41) deals with the most common form of unfair and dishonest contractual behaviour: making misrepresentations. Our law has always frowned upon this form of negotiation tactic, especially where it is done fraudulently. The section reinforces the general prohibition by providing an extensive list of specific forms of conduct in the consumer/retail environment that will be considered misleading or deceptive.

If you have ever been convinced to join a scheme where you were recruited to put in money and you would then have to recruit other people for you to make money down the line, then that was likely a pyramid scheme. The CPA explicitly prohibits pyramid schemes.

The characteristics of a pyramid scheme are that there is no product or a product of little value is being purchased by the newest members; new members are recruited to ensure the financial benefit for existing members rather than to sell a product or render a service of actual value; and the main source of income generated is from the introduction of new members and not through investment or other forms of wealth creation.

The CPA further protects consumers against the overselling of goods and overbooking of services. Unfortunately, this is a common practice in many industries. For example, you may have booked a service (eg purchased a plane ticket for a flight), and you are informed that there is no space for you, or you may have bought and paid for something, only to be informed it is no longer available.

The CPA therefore plays an important role in protecting consumers by creating a legal framework for fair and honest dealing. It sets out to reduce the difficulties which vulnerable consumers might face from dishonest negotiation tactics and trade practices.

Know your rights as a consumer

This 11-part 2021 series is written by attorneys at the Rhodes Law Clinic. The articles cover various aspects of consumer rights in terms of the Consumer Protection Act 68 of 2008. Here are the articles published to date:

#1 As a consumer, do you have rights?

#3 The right to choose

#4 The right to disclosure and information

#5 The right to fair and responsible marketing

#6 The right to fair and honest dealing