NGOs could buckle under Level 4 pressure 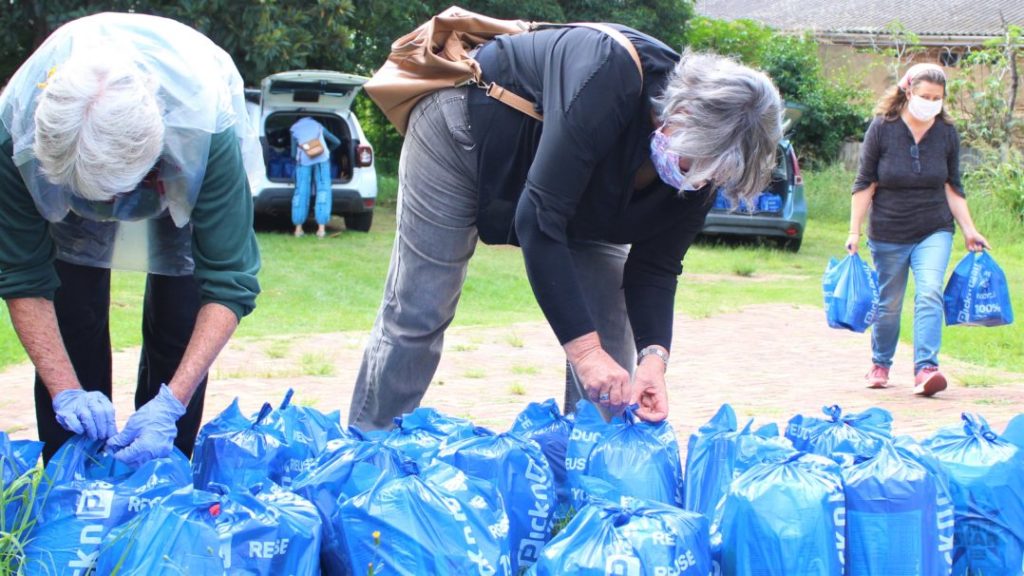 Volunteers prepare for distribution of food parcels in Makhanda in April 2020, as the lockdown hit family incomes. Photo: Sue Maclennan

“It is time for Cabinet Ministers to do more than revisit what restrictions to impose on citizens and organisations doing good and to dip into their own pockets,” Bam said. “A salary sacrifice should be on the cards as well.”

The pressure on NGOs since the first lockdown over a year ago has not eased and another hard lockdown could cripple the sector entirely, says Dr Armand Bam, Head of Social Impact at the University of Stellenbosch Business School. A survey by Tshikululu Social Investments in 2020 reported income losses for two-thirds of NPOs since the beginning of lockdown and indicated the sector could take years to recover, with some organisations not recovering at all.

“The government has reduced social development spending by 3% in 2021,” Bam said. “This is a reduction of R6.5 billion from the initial allocation of the 2020/21 MTSF which will culminate into cumulative reduction of R38.5 billion over the next three years. This is spending typically directed to recipients via nonprofits and needs to be seen in light of rising unemployment, currently at 32,6% and the highest since StatsSA started the Quarterly Labour Force surveys in 2008.

“What we witnessed with the initial hard lockdown was an almost immediate suffering amongst nonprofits. NGOs had to adapt – and in many cases, expand – their programmes and how they were delivered while at the same time cancelling many fundraising events, the lifeblood of many nonprofits.”

Bam said studies pointed to the rising calls for services coinciding with a loss in funds to provide the services. An international study in 2020 showed that more than 60% of NPO’s suffered the impact in a decline in individual donations. More significantly, over 50% of these NPOs indicated the need for retrenchment of staff, reduced working hours or reduced pay in order to stay afloat.

The situation in South Africa was no different – in the Tshikululu survey of over 300 NPOs, 66% of respondents indicated an immediate impact of lockdown on loss of income, in some instances a loss of over 75%, and two-thirds said that the impacts of the pandemic threatened their resilience and sustainability.

More than a third of the local NPOs surveyed had also taken steps such as temporarily laying off staff, reducing working hours or cutting salaries.

“A lasting impact was a common sentiment expressed across these studies. NPOs were due to experience at least 18 months of hardship before they might be able to revitalise their organisations. Many nonprofits have not recovered from being forced into new ways of balancing the value of their social mission with the viability of their operations,” said Dr Bam.

He said NGOs addressed societal problems, tackling issues that business and government were unable and unsuited to address on their own. Covid-19 had brought their utility to the fore and the disruption of the pandemic had required nonprofits to take the lead on most of the humanitarian efforts during this time.

“While we can praise the efforts of NPOs during this time, it has also exposed the soft underbelly within this sector. There has always been, and will always be, a reliance on business and government to finance the delivery of NPOs’ services. The liquidity of many of these organisations at the start of the pandemic was already at stake, with most operating with less than three months’ operating reserves, restricting their financial flexibility.”

The BDO Nonprofit Standards Benchmarking Survey 2020 showed that in past economic downturns, it had typically taken NPOs five years to fully recover.

“Access to health, education, food security, decent living conditions, at a minimum, are expected in flourishing societies. Our greatest challenge of addressing inequality in these areas will be further set back if NPOs cannot continue to do the work required. Understandably, the need to ensure our health care system is not overloaded must be considered, but what more then can we do to ensure that NPOs are still able to deliver on their mission and remain viable?”

Bam said more emergency funds are clearly not the answer. With South Africa’s economy forecast to recover to pre-Covid levels only in 2025, he says “we are in for a rough ride”.

He points out that the slow vaccination rollout has contributed significantly to delaying this recovery.

“We must bear in mind that any return to a hard lockdown will subdue this economic recovery and stifle prospects of growth. We are too easily invited to ‘family meetings’ while our government does not act with responsibility. Let the leadership once again show with intent their solidarity with citizens and put their money where their mouths are!

“It is time for Cabinet Ministers to do more than revisit what restrictions to impose on citizens and organisations doing good and to dip into their own pockets,” Bam said. “A salary sacrifice should be on the cards as well.”