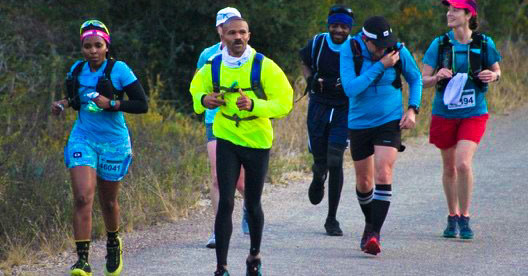 Every Tuesday at 5:15pm, Albany Runners hosts a Time Trial. Open to everyone, it’s a timed 4km circuit starting and finishing at the Graemian Centre. A few months ago, some of the runners had a crazy idea: Let’s join the Comrades Centenary Hope Challenge, they said. We can beat some previous best distances (as opposed to personal best times) while we raise awareness – and hopefully some sponsorship for our favourite causes.

So it was that at 6.30am on Sunday 13 June, while Makhanda was either still partying or still sleeping, a few of us gathered for a mini adventure.

At the Cock House Richard Alexander and Kennedy Simango joined Sally Price-Smith and we headed up George Street to meet Sinalo Nongaza and Ghida Bernard. Snacks and water on board we beetled up George Street to the Southwell Road to be met by Dave Stoloff with a car boot full of marmite sarmies and yummy muffins! Followed by the fun run down Woest Hill. The best treat of starting a run in the dark is the reward of a beautiful Eastern Cape sunrise and the chance of seeing wildlife as it starts its day. We were not disappointed. Gemsbok, roan antelope, water buck, buffalo, impala, warthogs and a caravan of giraffes greeted us along the way to Kenton-on-Sea. A few kilometres into our journey, which started like this, we were joined by a puffing Pedro who had missed the start and sprinted to catch us. Now we were six. Another five kilometres and our second sterling supporter, Colin Price-Smith, arrived, cokes, cold water, oranges, motivational and navigational advice! 15 kilometres along the road to Kenton, Sam Carolus and Juan Jonas arrived with their cheerful support crew, Emily and Tasmin, to commence their 45km challenge. The final members of the team joined our journey with 21km to go.

Kirsty Wells, Viv Quinn and Peter Stockwell, at 73 years young running his longest distance for some while. Now we were nine.

Despite the fact that it is a 500m drop from Grahamstown to Kenton, this is NOT a downhill journey. Our running devices show that our elevation gain was 723m! All Finished! With thanks to David, Colin, Cate, Emily and Tasmin for great support and Kirsti for much needed boerie rolls!

Donations can be made to Makana Residents Association for their Community Outreach support of Community Kitchens and their gardens in Makhanda: Find this campaign on GivenGain: https://www.givengain.com/cc/60km-for-60-years/

Alternatively to support the Coaching Conservation project at Amakhala and teach children to understand how we are all connected and “Inspire Kids Who Care” you can donate via GivenGain: https://www.givengain.com/cc/coaching-conservation–comrades-challenge/