Where has all the water gone? 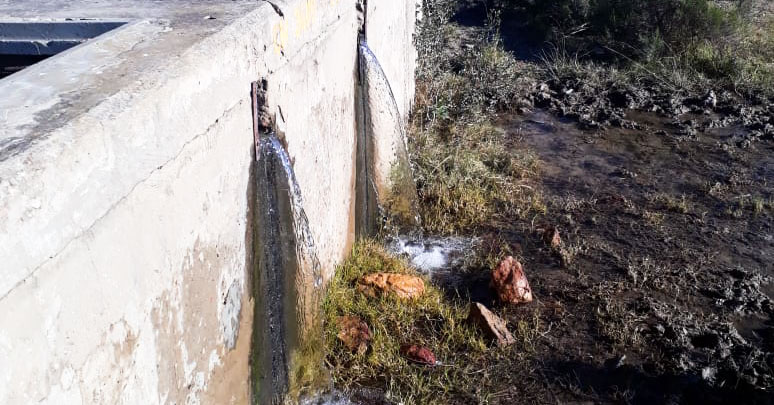 “I want to show you a big water leak,” said Masixole Gagayi.

We drove from his house north of Extension 6 towards the Mayfield sewage works and walked up a hill to an astonishing sight: clear, fresh water pouring out of four holes in a huge concrete, bunker-like structure. In eThembeni informal settlement, where Masixole lives, the only water comes from standpipes in the streets.

“Can we build a windmill?” he asked.

Tempting thought, but reporting it to the Municipality was top priority.

The concrete ‘bunker’ – a large valve chamber for managing the supply – forms part of the pipeline from the Botha’s Hill reservoir to the reservoirs that feed the town. An on-the-spot estimate (later checked more accurately) by a water engineer gave an amount of three litres per second from one of the holes; four such holes meant an estimated loss of 12 litres per second. Calculated out, this comes to a loss of more than one million litres per day in a town where the citizens have water only every second day.

It looked like a serious problem necessitating potentially expensive repairs, possibly days without any water at all – a nightmarish vision.

Regular volunteer in the River Rescue programme and water resource science student, Edgar Tumwesigye, made the following points:
“This is very serious; [according to]the current world statistics, an average household uses 349 litres of water each day, meaning if one million litres per day were getting wasted, that is equivalent to approximately 2 866 households. I’m not yet aware how many households are in Grahamstown currently, but that is a big population,” Tumwesigye said.

“On average, the annual metered bill is [R73 294]. This is how much a municipality like Makana would be losing if we didn’t have brave citizens like Mr and Mrs Gagayi.

“That [figure]is based on a household having 2.6 people. And yet for South Africa, the average household is around 3.3 people per household. Therefore, the annual metered bill could be somewhat higher.”

Philip Machanick commented, “On this basis, we would have around 30 000 households here. The water plant on a good day produces 12 megalitres, or 400 litres per household.

“You have to wonder where all that goes,” Machanick said. “At some point I seem to recall hearing that 70% of water produced is not accounted for by metered usage, though I don’t know how you’d know that now with no meter reading is being done.

“If this [calculation]is correct, it reduces available water to 120 litres per household.”

I took Makana’s Director of Infrastructure Ms Asanda Gidana and Councillor Ramie Xonxa to the site. Xonxa is the head of the Council’s Infrstructure portfolio committee. A conversation with the employees at the Mayfield Wastewater Treatment Works revealed that the water had been leaking like that “since March last year”.

When I visited the site on Saturday, the water had stopped; it looked as though it hadn’t been such a big repair job after all, and left me with the questions: With water – our most precious necessity – in such short supply, where every drop is essential, why are these major pipelines not inspected – on foot – every month at least, every week at best?

We are profoundly grateful to responsible citizens like the Gagayis, but why are the citizens of Grahamstown/Makhanda required not only to pay for services but to provide them as well?