Makana forges ahead with vaccinations 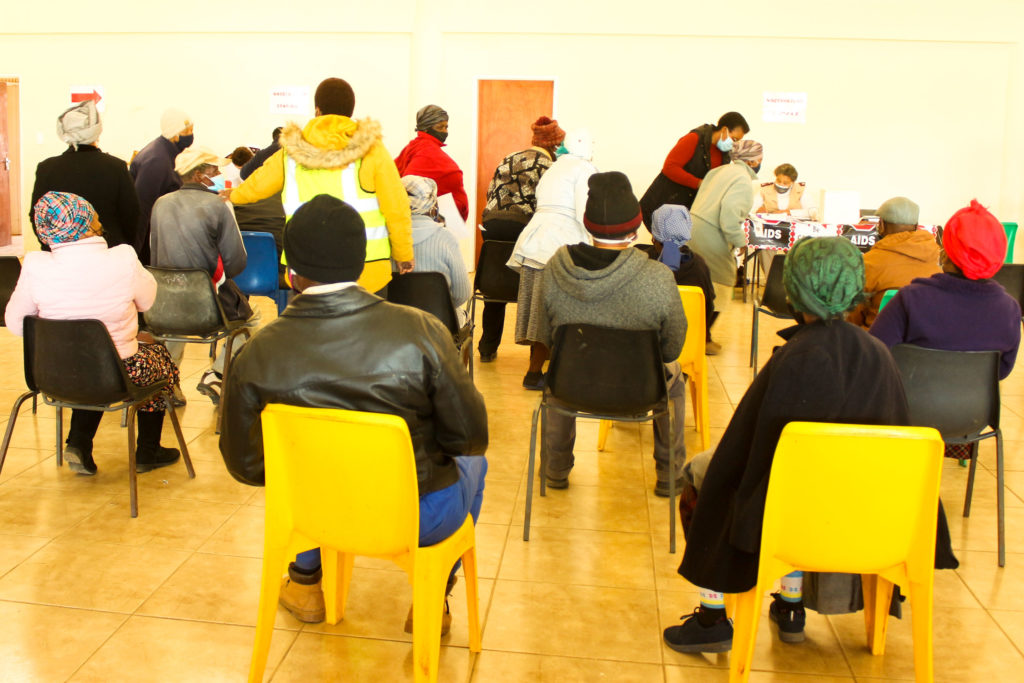 Community members wait to be vaccinated in the Extension 9 Hall. Makana has the best vaccination rate in the Sarah Baartman district so far. Photo: Sue Maclennan

Area based vaccination drives are continuing in Makhanda, with 1200 people vaccinated in two days this week at the Joza Indoor Sport Centre. Vaccination campaigns have also been conducted at the Extension 9, Albany Road Recreation and BB Zondani halls and on Friday 22 July, vaccinations move to the Foley’s Ground sport centre in Hlalani.

Settlers Hospital and Clicks continue to vaccinate large numbers as fixed sites, with Settlers Day Hospital recently opening up as a third site. Rhodes University this week opened a vaccination site at Gavin Relly Postgraduate Village; however, this is currently for the University’s staff and students only.

“When they [i.e. Rhodes staff and students] are done it will be open to the community,” Communications division staffer Velisile Bukula told GMDirect. The registration and booking procedure for the community would be communicated at that time, he said.

The Department of Health recently announced that they planned to do vaccinations on weekends to help speed up the rate. However, Docrat says while they would like to begin this as soon as possible, they don’t yet have the capacity to do so.

Makana’s clinics will become vaccination sites once they have internet connections and computer terminals.

Alongside the fixed-site and community vaccinations, the team is also called on to vaccinate essential workers. Social Development staff have been vaccinated. Those to come in the next weeks include the National Prosecuting Authority, Traffic Department and local police.

“We will also be doing campaigns in the farming communities,” Docrat said.

To achieve community immunity, scientists have determined that 67% of any population needs to be vaccinated. In the Makana Municipal area this amounts to 53 932 people.

“We must remember, though, that many of those in the vaccinated 31% still need to return for their second [Pfizer] dose,” Docrat said.

The Sarah Baartman District, Dr Beyers Naude and Kouga municipalities, which have comparable populations, have achieved only 19% and 17% respectively.

According to national data on Thursday 22 July, the total number of laboratory-confirmed cases of Covid-19 was 2 342 330.

The trends in the coming week would be crucial to determine whether the peak of the third wave has been reached or not according to the National Institute for Communicable Diseases (NICD) which noted a drop in the testing rates the past two weeks.

“And while this may be reflective of a decreased need for testing due to decreased infections, access to testing has been limited in certain areas due to the social unrest,” said NICD’s, Dr Michelle Groome.

There had been a significant drop in numbers in Gauteng, the epicentre of third wave, with 4 988 new cases. The province’s new cases per day peaked at more than 16 000 at the height of the third wave.

At the height of the recent unrest in KwaZulu-Natal and Gauteng, there had been disruptions in all areas of the health service delivery system, Kubayi said.

“There was a decrease in the number of vaccinations due to the closure of vaccination sites. There was loss of vaccines due to looting. An estimated 120 private pharmacies were destroyed, which led to a loss of approximately 47 500 vaccine doses and lots of damage to infrastructure.”

Fortunately, a large majority of public vaccination sites had not been damaged, which meant they could immediately resume vaccinating – “and that is what has happened,” Kubayi said.

However, the government was extremely concerned that the many gatherings during the unrest in Gauteng and KwaZulu-Natal will lead to another surge in infections.

More than 6 million people have been vaccinated in SOuth Africa, Kubayi said and the country is currently vaccinating at a rate of more than 250 000 per day.

“Though yesterday the number of vaccinations dropped, we still believe that we will reach our goal of vaccinating at more than 300 000 people per day in the coming week,” she said.

Through collaboration between the government and the private sector, 1500 volunteers including doctors, nurses and health workershad been brought into the programme to help us vaccinate on weekends at various sites across all nine provinces.

Meanwhile, President Cyril Ramaphosa has welcomed this week’s announcement of a collaboration between South Africa’s Biovac Institute and the global pharmaceutical producer Pfizer.

Speaking in his capacity as African Union Champion on COVID-19, President Ramaphosa said: “Today’s agreement will contribute significantly to health security and sustainability on our continent, which currently has the least access to vaccination in the world.”

Biovac and Pfizer announced Wednesday 21 July 2021, that the Pfizer COVID-19 vaccine will be produced in Cape Town by the Biovac Institute. Biovac is a vaccine producer and public-private partnership between the South African government and the pharmaceutical private sector.

According to the World Health Organisation (WHO), the cumulative number of cases reported globally could exceed 200 million in the next three weeks.