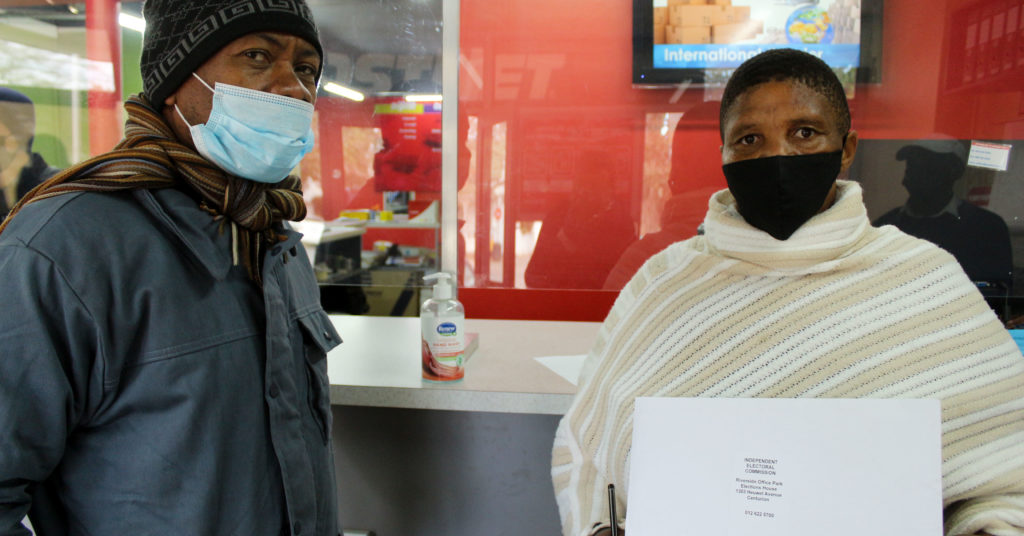 Ayanda Kota and Ntomboxolo Manyati at Postnet in Makhanda on Tuesday 13 July, where they sent off the registration application for a new party to contest the upcoming local government elections, the Makana Citizens Front. Photo: Sue Maclennan

The formalisation of the Makana Citizens Front comes after ongoing discussions between various civil society groupings. An interim management committee was elected at a meeting at Fingo Square on 27 June.

“This is a historic moment for the people of this city,” said UPM leader Ayanda Kota.

“We have registered a civic movement that will contest elections on the mandate of the residents of Makhanda. They are sick and tired of political parties that are not accountable, that are incopmpetent. They are sick and tired of the politics of deployment and of a municipality that is not accountable to its people, but to a faction of a political party.”

Kota said the mandate from the community at the Fingo Square meeting on 27 June was for a municipality that is depoliticised.

Among the documents sent off with the Makana Citizens Front registration details Kota confirmed, are a Deed of Foundation signed by 100 registered voters and a copy of the party’s Constitution.

A party can register at national level, which will allow it to contest elections of the National Assembly, provincial legislatures and all municipal councils.

Registering only at municipal level means a party will only be allowed to contest municipal elections.

According to the IEC there are 621 parties registered in South Africa. Of these, 295 are registered to run in national elections and 326 at a municipal level.

The IEC has confirmed that the anticipated date for its release is 21 July.

The Electoral Commission this week launched an online voter registration facility. On the new portal, new voters can register and existing voters can update or amend their registration from the convenience of their homes or elsewhere.

The Electoral Commission believes the online facility will be a game-changer in promoting voter registration especially among young and first-time voters.

“Research and engagements over the years with young eligible voters to better understand their behaviour have frequently identified the lack of online voter registration as a key obstacle,” the  Commission’s Chief Electoral Officer Sy Mamabolo said.

The introduction of an online registration system is also a crucial part of the Electoral Commission’s plans to boost voter registration despite COVID-19 ahead of the Local Government Elections scheduled for 27 October this year.