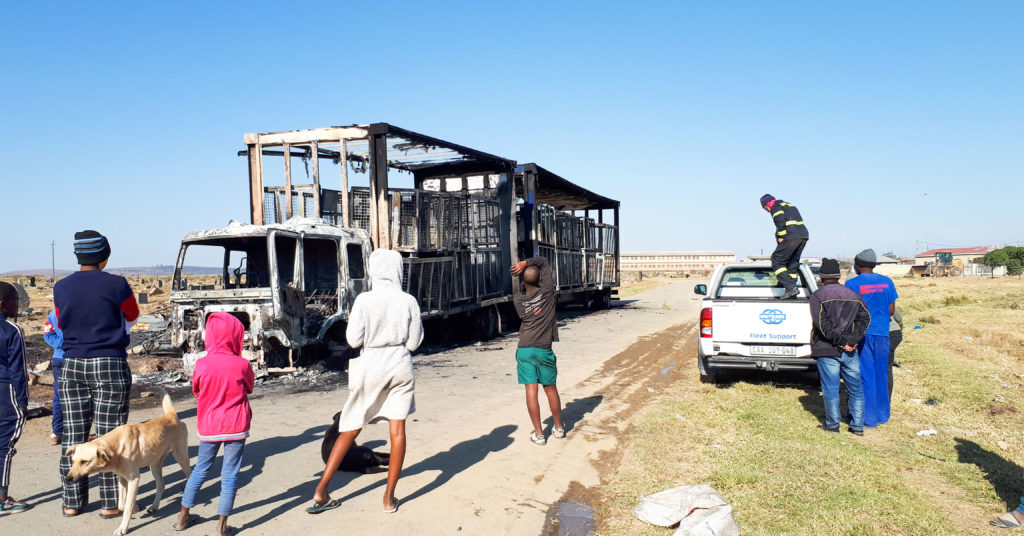 Residents look on as a team from trucking company Unitrans prepares a burnt-out truck for removal on 12 July 2021. Photo: Sue Maclennan

Police say the motive is unknown for an incident in the early hours of Monday 12 July that left the burnt-out shell of a freight truck abandoned opposite the old Extension 7 graveyard in Makhanda. The driver was unharmed.

Parts of the truck, destroyed beyond repair, were still burning around 10am on Monday and children – apparently dispatched by their parents – were salvaging large metal cages from the wreck. A source explained that the truck is used to transport motor vehicle parts: the cages are containers for those parts.

While one source said the truck had been empty, another said it was carrying car bumpers. GMDirect was referred to the company’s had office for comment. By midday Unitrans were not aware of the incident nor any of the details, but said they would investigate.

Around 5am, the truck was parked adjacent to the old Extension 7 Graveyard, opposite a row of houses. One resident said he had been awoken by three explosions and had come outside to see the truck in flames; however none of the residents said they had seen anyone in the vicinity, and did not know what had become of the driver.

A local police source said that contrary to a social media post that circulated on Monday, there were no protesters on the N2 outside Makhanda this morning. However, there had been burning barricades across the road, the source said. GMD did indeed find the burnt remains of a large log and piles of blackened wire left from burning tyres.

One (unofficial and unconfirmed) version of what happened is that the driver saw the burning barricade in the road and drove towards it anyway. He saw that the tyres of his truck had caught fire and so he stopped. Then he was accosted by three men and ran away, leaving the keys in the ignition. This sequence of events was not confirmed by the national spokesperson.

* In the rioting that followed the imprisonment of former president Jacob Zuma, rioters burnt trucks, including 30 at Mooiriver in KwaZulu-Natal. Because of the timing, and apparent similarity, of the Makhanda incident, GMD’s query was referred to the national spokesperson for the South African Police Service. The response is as follows:

“The driver of an abandoned truck found it torched on the Fort Beaufort Road near Extension 7, Joza in Makhanda this morning. He alleged that he was driving on the N2 near Rhini Junction, when he noticed that the road ahead was blocked with burning materials.

“He further said that he stopped and immediately saw three men approaching the truck. He then ran towards the nearby bushes. He later went to the police station to report the matter. The truck had no cargo and was travelling to East London. Police are investigating a case of theft of truck.

“The motive is unknown at this stage.”

The Unemployed People’s Movement, meanwhile, has strongly dissociated itself from the incident and has condemned the rioting that has torn into parts of Gauteng and KwaZulu-Natal.

“The Free Zuma campaign is not principled,” Kota said. Instead it was organised on a premise that was “very very wrong”.

“These are the very same people that have looted our country’s coffers and milked our municipalities dry,” Kota said.

He discouraged Makhanda residents from aligning themselves with politics that is “dangerous… it’s a farce”.

“There is no quick fix: we have to build up our own politics from bottom up,” Kota said.

Kota is one of the co-ordinators of the Makana Citizens Front, which is set to register this week to contest the upcoming local government elections.

* The following sentence that was in the previous version of this article has been removed:
“There is no indication from either the police or local sources that the incident was related to the unrest that has afflicted parts of South Africa in the past week.”
It has been removed because of new information suggesting that the once-off, highly unusual incident may have been part of an orchestrated bid from outsiders (not Makhanda residents) to spread the anarchy that has afflicted KwaZulu-Natal and Gauteng. However, this has yet to be confirmed.