How to find a dinosaur 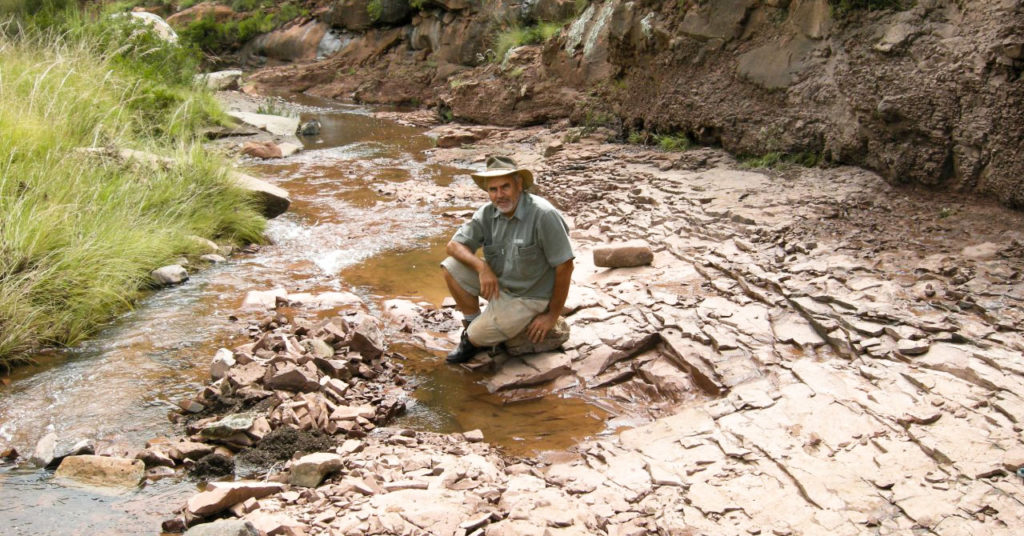 Palaeontologist Billy de Klerk speaks about finding the specimen of Heterodonosaurus Tucki whose breathing mechanism was described in an article published in an international scientific journal this week – and about putting together pieces of the 200-million-year-old puzzle of dinosaur life.

The specimen that Dr William de Klerk, Emeritus Curator, Palaeontology, at the Albany Museum, found near the village of Rossouw in 2009 sheds light on how Heterodontosaurus Tucki’s  family evolved a unique way of breathing. As far as this this week’s research publication on the open access eLife platform is concerned, De Klerk is quick to emphasise that he is a “minor” co-author.

But he was the person who found and excavated the skeleton and that’s what we wanted to hear more about.

To find these specimens, you first need rocks that were deposited during a time when the dinosaurs lived, De Klerk explains.

“So you need the right age of rocks, firstly. Second, you need the kind of rocks in which these sediments accumulated.”

Dinosaurs were land-living animals, so are not found in marine deposits – only in sediment deposited by rivers or lakes.

“You also need the right conditions for the animal to be deposited and rapidly buried. First it has to die, and then fall into some water. And be covered up very quickly so the sediment can preserve the bones.

“From there, the bones will slowly be converted to rock and that rock keeps the original shape of the animal’s bones. Over a long period, the overlying sediments are eroded away and gradually expose the fossilised bone.”

De Klerk found the 2009 Heterodontosaurus fossil in a streambed near the village of Rossouw in the north-eastern Cape.

“The first fossils found there were in rock above the water level,” he said. “The valley had eroded to the point where the rocks were exposed.”

On his 2009 visit to the area, he walked slowly up that riverbed, “looking at every nuance of colour and texture”, when he noticed what looked like real bones sticking up in the riverbed.

“Continuous flow and sediment had worn it down, like sandpaper, so the bones were quite smooth.”

When he went back a month later, the bone that had been exposed was underwater.

“To excavate a dinosaur that is in a stream of running water just complicates it even more,” he said.

About 100 metres from the skeleton, De Klerk noticed a white patch in the rock – no longer or wider than the edge of a matchbox.

“The rock is generally a reddish colour, quite fine grained, and this little white patch turned out to be the upside-down lower jaw of a dinosaur as well. It was exactly the same type of dinosaur and this was absolutely remarkable, because over a period of 40, 50 years looking for dinosaur fossils, we’ve only found four or five specimens of Heterodontosaurus, including this one.”

How did he know it was something special?

“But mammal-like reptiles can be identified very easily by finding a single hole in the skull, with one hole behind the skull for muscle attachment.

“One eye, one hole is a mammal-like reptile. an eye socket followed by two holes in the skull for muscle attachment is a Diapsid animal – a dinosaur or crocodile type animal. So more reptilian.

“As soon as I had the two holes exposed, I knew I had something very special.”

The exposure, or “preparation”, was done in a laboratory.

“The traditional way to collect fossils in the Karoo is to hammer-and-chisel a channel around the fossil that slightly undercuts the fossil,” De Klerk explains. “It’s almost like a little mushroom.”

That’s followed by a plaster of Paris jacket over the “mushroom”. Once that’s dry, you break it off.

“We couldn’t do that in this case, because it was underwater.”

De Klerk spoke to his good friend John Heppel, then a technician in the Rhodes University Geology Department, and they came up with a plan. It involved De Klerk’s new diamond-bladed rock-cutting circular saw.

Their biggest challenge, cutting underwater in that way, was not to cut through any bone.

“It was tricky because as soon as you start cutting underwater, it creates plumes of sediment that discolours the water and you can’t see what you’re doing.”

In the end, they had to make mini-dams and divert the water away from where they were working.

There was an uncomfortable moment (LISTEN).

Back at the Museum, De Klerk prepared the skull of the specimen himself. “We weren’t sure exactly what it was, and most diagnostic features are housed in the skull,” he explained.

It was a painstaking process that took him three years, on and off, using pneumatic air scribes – “like dentist drills driven by compressed air” – under a microscope in his laboratory.

The first order of business is to stabilise the entire fossil.

“It’s sometimes quite fragile and it wants to fall apart, so you use a chemical bonding liquid.

“So with this very sharp needle driven by compressed air, under a microscope, you can see exactly where the rock is and where the bone is.”

Why is this specimen so special?

“The Heterodontosaurus we found in these rocks which are dated about 200 million years old – the early stages in the evolution of dinosaurs,” De Klerk said.

“This dinosaur was on the cusp of change from predominately meat-eating dinosaurs to more herbivorous creatures.”

“It had different typed teeth.”

Sharp, prominent canines – two at the bottom, two at the top, gave it a very ferocious bite.

“But at the back, its cheek teeth were a battery of grinding teeth, for grinding up vegetation.”

It was always a problem figuring out what the canines were when its food was predominately vegetation.

“The eventual thinking was that the canines were used mainly for display and defence rather than killing other animals.”

Another special feature of this Heterodontosaurus was that it was bipedal, able to use its hands as a tool, not just for locomotion.

“Dinosaur” conjures up Steven Spielberg-proportioned lumbering giants – but Heterodontosaurus was one of very many small species. If the reconstruction is accurate, it looked more like a cute Disney character than a monster.

“Heterodontosaurus was no more than hip height when it stood up on its back legs, so it was quite small,” De Klerk said.

Every little piece fits into the puzzle of this wonderful story, this wonderful evidence that we have for the origin of life and also the evolution of life: how life diversified through time.

Every piece of the puzzle matters

Every piece of palaeontological record matters, De Klerk said, which is why if you come across what you think might be a fossil, you need to be very careful what you do with and around it.

Otherwise, it could mean losing a critical piece of evidence of past life.

“Unfortunately it has happened a lot. Wonderful fossils have been found on someone’s mantelpiece.

“Every little piece fits into the puzzle of this wonderful story, this wonderful evidence that we have for the origin of life and also the evolution of life: how life diversified through time.

“The more fossils we collect, the greater our certainty of inference. We will be able to make better judgments on these pieces.

“Every fossil is important.”

What should you do if you think you’ve found a fossil? (LISTEN)

“Don’t touch it at all,” De Klerk emphasises. “If it looks like a fossil, the first thing is to look around it. Scour the ground around it within about a 10-metre radius and ascertain if there was anything that got broken off and kicked around from the original.”

The only palaeontological repositories curated by palaeontologists are listed below. They will be able to assist with queries from anywhere in South Africa, and will be able to forward queries to the specialist best suited to provide input.
GAUTENG
Evolutionary Studies Institute, University of the Witwatersrand, Johannesburg
Professor Julien Benoit  Julien.benoit@wits.ac.za
Prof. Jonah Choiniere  Jonah.choiniere@wits.ac.za
Ditsong Museum, Pretoria
Dr Mirriam Tawane  tawane@ditsong.org.za
FREE STATE
National Museum, Bloemfontein
Dr Jennifer Botha  jbotha@nasmus.co.za
WESTERN CAPE
Iziko Museum, Cape Town
Dr Claire Browning  cbrowning@iziko.org.za
EASTERN CAPE
Albany Museum, Makhanda
Dr Rose Prevec   R.prevec@am.org.za
Any queries regarding collecting permits and the legal aspects of collecting fossils can be directed to: South African Heritage Resources Agency (SAHRA), Dr Ragna Redelstorff  rredelstorff@sahra.org.za
Dr Prevec adds:
Fossils form part of our National Heritage, and are protected by law. It is illegal to disturb, remove, collect or sell fossils in South Africa. These laws apply even if you were to find a fossil on your own property. Professional palaeontologists are also required to apply for permits to collect fossils. That said, we rely heavily on the interest and keen observation of members of the public to find new fossils. There are so few palaeontologists in our extremely fossil-rich country, that the more eyes there are on the ground looking for fossils, the better it is for our science.

Collaboration across decades, and continents

eLife is hosted by elifesciences  – a non-profit that works to improve research communication through open science and open technology innovation. It seems a particularly appropriate platform for writing about a result of this 12-year-long collaboration between scientists and technicians and their institutions, across the country and across continents.

“If you look at the paper on this Heterodontosaurus, it’s only one facet of information that’s been extracted, and that’s how it actually breathed,” De Klerk said.

“We couldn’t describe it – we knew it had already been described. But we could improve on the description with better information about its dentition.”

The dinosaur genus, Heterodontosaurus (“different toothed lizard”) lived during the Early Jurassic, 200–190 million years ago. Heterodontosaurus tucki was  named in 1962 when a skull was discovered in the Karoo. G.C. Tuck, says Wikipedia, supported the discoverers. More specimens were since found, including an almost complete skeleton in 1966.

“There’s plenty of other research still to be done on that fossil. For example, Heterodontosaurus’s locomotion – how it was moving around. Was it able to swim? Was it able to catch fish perhaps?

“All these questions can still be answered by looking at this fossil in greater detail.”

De Klerk has made remarkable discoveries leading to groundbreaking research during his 32 years as a palaeontologist at the Albany Museum.

“We’ve known for a number of years that there are dinosaur fossils in the Karoo: the first [recorded]one was found in 1852.

“The first of this particular species of dinosaur was found in [1962]. That specimen was described and it was given the name, Heterodontosaurus tucki. This specimen is particularly important because it’s a full skeleton.”

We’re not done yet!