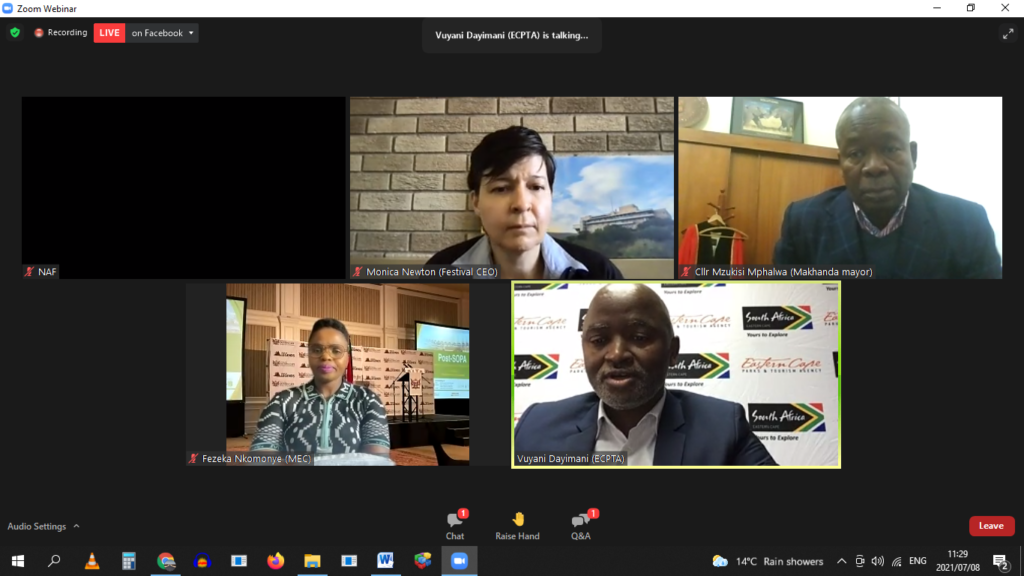 From now on, the National Arts Festival will be both a live and digital events company, CEO Monica Newton announced at the event’s opening briefing on Thursday 8 July. The 2021 National Arts Festival Experience was to have been a hybrid event with live and online performances, workshops and exhibitions. Leading up to it was the Standard Bank Presents series in Cape Town and Durban – suspended in Johannesburg because of rising Covid-19 cases there. The President’s announcement of a two-week alert Level 4 lockdown put paid to the hybrid plan and for a second year, the event is entirely online.

In 2020, as the reality of the Covid-19 pandemic took hold, the Festival team reimagined and reworked the programme into the first “vNAF” virtual Festival. That experience stood the Festival team in good stead, Newton said. Having successfully made the superhuman switch from partly live to all digital in 10 days, they have opted to use their new “superpower” to adapt their business model going forward.

“This year we had a very short time to make the switch,” Newton said. It had been crazy – changing and swapping venues; capturing exhibitions that were going to be up for live viewing on 3D camera.

“But the artists were prepared to walk this journey with us and the team was more than up to the challenge: we are professionals at this.”

The Standard Bank Presents programme leading up to the main event had given the Festival a head start, Newton said. Many of those shows had been recorded for a second virtual run.

“Our 2021 Festival was built with change in mind, we knew we might need a Plan B and this was a part of our risk mitigation strategy from the start,” said Newton had said earlier.

“Our Plan B definitely helped us out,” Newton emphasised this week.

The town and its long-running roads, sewage, water and pothole problems that were centre-stage as Mjekula, who opened the virtual session, said they’d hoped that by this time Makhanda would have addressed its infrastructure challenges.

“This move to online is a reprieve,” Mjekula said. “Next time, Mayor Mpahlwa, let us not be having a debate about the suitability of Makhanda as the host city for the Festival.”

The Mayor had to respond and, during his presentation, assured Mjekula, and the Festival community, that the municipality was not sitting back.

“I would like to assure Mr Mjekula that we are working flat-out to address historic infrastructural backlogs because we understand what the Festival means to the city,” Mpahlwa said. “The Festival is the gold, the diamond of this city.”

He said the city was working with the Department of Sport, Recreation, Arts and Culture on developments for the former Dakawa Arts Centre building in Froude Street.

“There are big plans: watch this space,” he said.

Eastern Cape Tourism CEO Vuyani Dayimani referred to the R377 million GDP for the region that the Festival generates.

“Despite all the challenges, the National Arts Festival has stayed in the Province,” Dayimani said. “We are very grateful for that decision.”

He pointed out that a virtual-only Festival didn’t mean visitors couldn’t enjoy the Province’s tourism destinations.

Many game reserves in the Sarah Baartman District had discounted rates for safaris. With schools closed, visitors and locals should take the opportunity of going to reserves and other facilities at discounted rates.

“The Eastern Cape is yours to explore,” Dayimani said. “Enjoy the Festival virtually for now, but the time will come when you can be here again.”

Arts and Culture MEC Fezeka Nkomonye said the Department’s support for 250 artists to showcase their creativity was a bid to ensure the entire value chain of the creative sector is developed in the province.

“Throughout the province, there are smaller festivals that feed into this national Festival and we want to move the sector from relief to recovery.”

Nkomonye said she had held discussions with the Festival on how better to spread the benefits of the festival – not only to Sarah Baartman and Makhanda, but to other parts of the Province.

“We appreciate that you have taken ‘Amazing’ beyond Makhanda to venues in Durban, Cape Town and Johannesburg and  accommodating Standard Bank Presents: the parts we got to enjoy were a delight.

“We had expected to be experiencing Makhanda hospitality – including the famous gluhwein,” Pooe said. “But thank you for ensuring we still serve the artistic community. Resilience and the lessons learnt from last year’s Festival ensured you were able to turn what was going to be a hybrid festival into a fully virtual one.

“If there was ever testament to the Festival’s ability to find new ways, this is it.”

Pooe thanked artists for their resilience.

“Artists adjust – they’re more than ready to do it,” Pooe said. “I hope the virtual staging is not a discouragement, but rather brings power to your creative spirit.”

Tickets can also be purchased directly from the programme page.

A calendar view of the Festival programme is available to view and download.