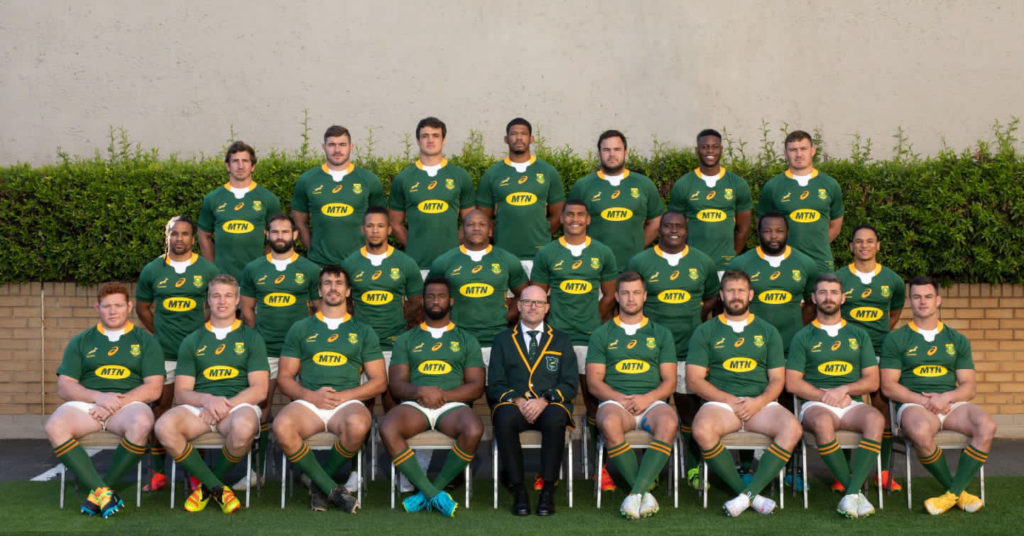 The Springbok lineup for the Test against Georgia at Loftus Versveld stadium in Pretoria on 2 July 2021. Photo: SA Rugby

When the Test match between the Springboks and Georgia kicks off at 7pm on Friday 2 July, one player will be making history for Makhanda. Alumnus of Mary Waters Secondary, Swallows Rugby Grahamstown and Kingswood College, Rosko Specman, is in the starting line-up for tonight’s match. Among those glued to the screen and with their hearts in his hands will be his former club – and, of course, his parents.

Specman will be among only a few to play for the Springboks in both the 7s and 15-man formats, and the first player from Makhanda to do so. He also stands tall among the ranks of Makhanda-raised Springboks.

Specman’s rugby career began at Mary Waters Secondary School, where he started at scrumhalf in the school’s 1st XV. The coach moved him to wing during the annual Maria Louw Sports Tournament in Queenstown. Vivian Goliath was moved from wing to centre to make way for the young Specman.

It worked: they went on to win the event band the move proved dividends from that day. It’s in that position that he proved dangerous and where he made history. Specman went on to play for EP Schools and later received a scholarship to attend Kingswood College. Those magical feet took ‘Specmagic’ to many of his breathtaking tries at school and saw him become a household name in the region.

After school, Specman joined the Sharks Academy and later played for the Sharks senior team the Vodacom Cup and Currie Cup rugby competitions.

He later received an offer from the Pumas Rugby Union. A star player for them, he also claimed Player of the Season in his first season.

Rosco then joined the Springbok Sevens and played for them for number of years, scoring many breathtaking tries, and winning many awards and accolades including being nominated for World Rugby Sevens Player of the Year and being awarded SA 7s Player of the Year.

Springboks Team Manager and Head of Operations, Charles Wessels, is also a from Makhanda. Wessels taught history at Mary Waters Secondary (Mawas) and also played his rugby for Mawas and Swallows.

Wessels has been integral to the Springbok set-up for several years, including the 2019 World Cup victory.

Tonight’s match will be the Springboks’ first Test since their thrilling World Cup victory in 2019.

It will be an extra special night for Specman’s family and former club. Rosko’s parents, Merle Specman and Joseph Specman, will be watching from the start of the build-up at 5.30pm.

“We are not going to leave that screen,” Joseph told GMDirect. “Luckily we’ve got DSTV.”

Swallows club secretary Xanephen May said, “We are very excited to see what our boytjie is going to do. We believe he is going to give his best and that his international 7s experience will shine through.

“Good luck, Spekkies! We will be watching the game as the Swallows Executive – supporting you with all Covid protocols in place!”

As Makhanda residents, we are immensely proud of both Specman and Wessels and wish them all of the best for tonight’s match, their upcoming International rugby season and beyond. You are true ambassadors for Grahamstown/Makhanda.

HOW TO WATCH
The match at Loftus Versveld stadium in Pretoria kicks off at 7pm and will be broadcast on SuperSport. Live streaming will be available to DStv subscribers through the Now App. Sky Sports will show the Springboks’ two warm-up Tests against Georgia ahead of the British & Irish Lions tour of South Africa: build-up starts at 5.30pm, livestreamed on Sky Sports Action

This is how Rosko Specman’s parents and former coach reacted when he was announced a member of the Springbok squad on 5 June: https://fb.watch/6uAQlIPb0q/

Other Springboks with Makhanda connections (if we’ve left any out, please let us know and we’ll add them here!)

Kingswood College – Henry Walker; Benny Osler (Captained the Springboks and inducted into the International Rugby Hall of Fame in 2007); Stanley Osler; Jack Slater; Jack Dobie; Tiny Francis; Colin Kroon; Rosko Specman. Kingswood rugby coach Carey Hobson says, “It is interesting to note that in the test match played against the All Blacks at Kingsmead in 1928 that the Springboks won 17-0 all the points were scored by Kingswoodians (Jack Slater, Stanley Osler and Bennie Osler).”
Chris Juries and Rosko Specman have represented the Springbok 7s (Blitzbokke)