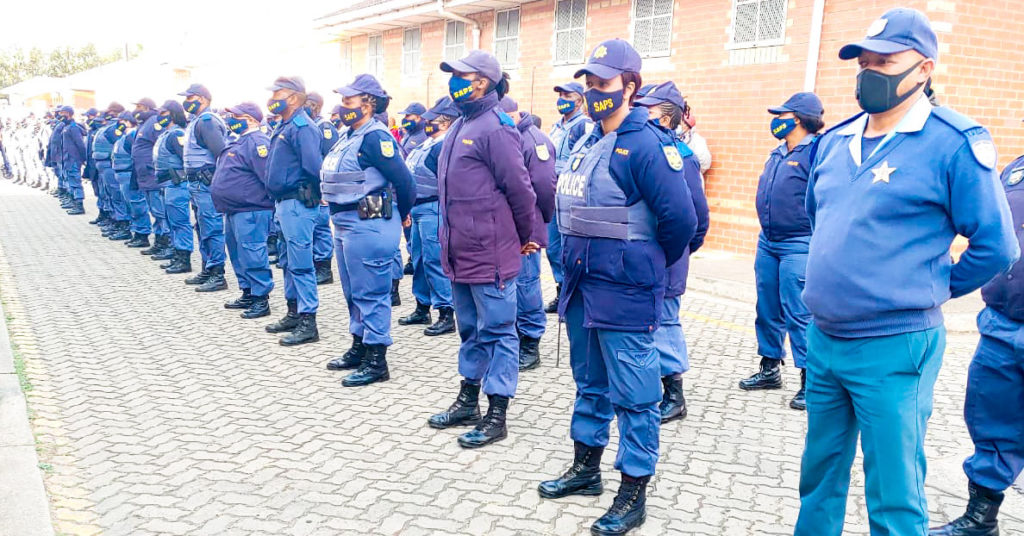 South African Police Service members on parade on 1 July 2021. An expanded law-enforcement operation has been deployed in Makhanda, starting with POPS on the eve of the now-postpooned by-election, then boosted by additional traffic and private security officers. Photo suppllied

More than two dozen interim protection orders were served in Makhanda on Thursday 1 July – Day One of a four-day blitz on everything from Covic-19 compliance and traffic offences to drug dealing. The local law-enforcement campaign has been boosted by a multidisciplinary force comprising provincial traffic officials, personnel from private security companies and additional police.

The SAPS plus ‘force multiplier’ operational unit was briefed on Parade on Thursday morning by Operational Commander, Colonel Mbulelo Pika.

By 2pm, Nkohli had reported action on illegal liquor, flouting of the Disaster Management Act regulations for funerals and drug dealing. In addition, 26 interim protection orders had been served.

Nkohli said for security reasons the police could not disclose by how much the normal local police force had been expanded, but said the boosted SAPS component for the campaign was 168.

“Extra personnel were sourced from various units and police stations across the Eastern Cape for this,” Nkohli said. Additional personnel were from the traffic police and private security companies.

As of 2pm on Thursday 1 July, Nkohli reported the following:

The day before, Wednesday 30 June, saw the launch of a major renovation and maintenance project at the Grahamstown Police Station in Beaufort Street. The upgrades will be to make the 30-year-old facility compliant with current health and safety requirements, as well as accessible for differently abled people and more user friendly to the public.

Large contingents of Public Order Police from other centres began arriving in Makhanda on Monday 28 June, ahead of the now postponed Ward 3 by-election.