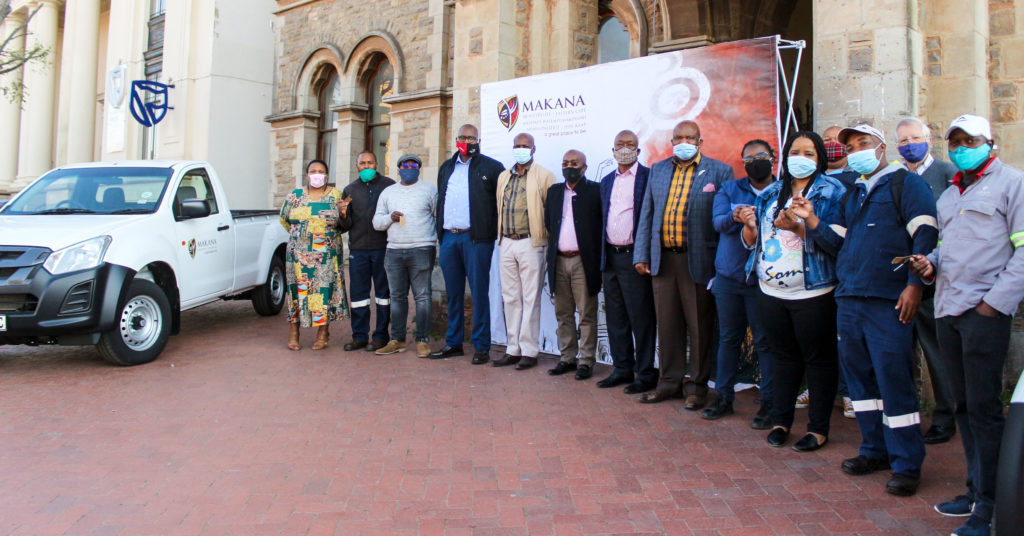 Makana Municipality leadership and senior staff gather for the handover of five long-wheelbase Isuzu single cab bakkies on 22 June 2021. They will be used in the Engineering and Infrastructure Department - three for Water and Sanitation and two for Electricity. Photo: Sue Maclennan

Excited staff and senior leadership of the Municipality gathered briefly in front of the City Hall on Tuesday, 22 June 2021 to witness the handover. Essential services employees from Makana LM have been struggling to attend to complaints promptly due to the shortage of vehicles. The new vehicles were purchased to address this challenge, and to ensure employees are able to work on service delivery backlogs.

Speaking during the handover, Engineering and Infrastructure Services Portfolio ChairpersonCouncillor Ramie Xonxa said this was a proud moment for the Directorate.

“This is not a secret, this must be public so that everybody must see that we have bought new bakkies to ensure that we enhance service delivery. We want everyone to be witnesses of this event,” Xonxa said.

The need for the new vehicles also emanated from the fact that many of Makana’s vehicles are old and as a result there had been a decline in the response time when dealing with complaints. This has been especially evident with essential services departments, which deal with faults in respect of water, electricity and sanitation. This has a negative impact on the Municipality’s reputation, because the municipality is assessed by how quickly it responds to faults, as reported.

Municipal Manager Moppo Mene said residents had been complaining that the municipality is not doing its work. Mene reminded the people in charge of the bakkies that residents  constantly complain that municipal vehicles are not handled responsibly.

“They say [municipal staff]drink in them and do wrong things in them. Our request is that we must not see these bakkies doing things that they are not supposed to. Let us keep these bakkies in a good condition and ensure that they are used for the work they are meant for,” the Municipal Manager said.

Executive Mayor Cllr Mzukisi Mpahlwa said the handover was a very significant event since he’d been the Mayor. “I think this is the first time in the three years that I have been in this position that I have accepted five new bakkies at once.”

The Executive Mayor said he was hopeful that there would be no more excuses with regards to responding to faults that are reported by residents. The Executive Mayor reiterated the fact that the municipality’s reputation was not good in the community. “I want to endorse what the MM has said, our reputation is very bad regarding the use of our vehicle and in general. We have to change this and show that we care for these assets. This is tax payer’s money it’s not ours, so we must treat these assets with care. I’m happy and I can see the excitement in everyone’s faces, I’m also happy.”

The Director made it clear that she expects the rate of response to improve and to see spillages around town reduced significantly. “We are grateful to the MM and the management for making this programme a priority and making sure that this day is realised. I will hold the supervisors to account, there must be pre and post inspection of the vehicles.”